For the calculation of the noise values upon which the present maps are based, the input data available to the State of Berlin for the reference year 2011 were used.

The mapping zone covers the area of the State of Berlin, amounting to 892 km². The examination covered the noise load exposure of 3,460,725 inhabitants.

Moreover, the upper and lower edges, respectively, of the railway embankments and cuts were ascertained from stereo aerial imagery with the precision of < 0.5 m, and integrated into the terrain model as contour lines.

For the current Level 2 noise map, the Level 1 terrain model was adopted, and, on the basis of DGM2 and measurements, also supplemented to show the terrain edges along embankments, cuts and underpasses of roads. The edges along railway embankments are to be checked and corrected if necessary.

The measurement of these edges is carried out as follows:

Tunnel facilities were depicted in the calculation model by interruptions in route lines. Tunnel openings were not modelled as separate noise sources.

Bridges across roads and waters were taken into account in 426 sections where the high position of a road has a relevant acoustic effect on the neighbouring built-up area. A reflecting bridge platform was modelled across the width of the road in each of these cases.

When using the noise map, the following must be observed: bridge structures are not included in the surface of the terrain; rather, they rise above the terrain. Noise maps are calculated at a height of 4 m above the terrain, and can therefore be related to the area below a “noisy” road bridge which acts as a sound barrier, with accordingly low local immission levels.

The floor plans of 535,920 buildings, with specification of the number of floors and the building uses shown in the Table below were taken from the Automated Real Property Map (ALK) of the City of Berlin (as of June 2011) (see Table 2):

Explicit building heights were not available and were, therefore, defined through the following empirically determined function: [building height = 3.2 m + number of storeys x 2.8 m]. As information on use is available for most buildings, the above function will be altered in justified cases. For garages, kiosks and public toilets, a height of 2.5 m is set per storey; for halls, sheds and transformers it is 3 m per storey.

159,473 buildings in the areas surrounding Berlin were integrated into the model including their explicit height data from the State of Brandenburg. These buildings act as obstructions and reflectors of road and railway noise sources at the edge of the area under examination.

Building façades were included in the calculations as reflecting objects, with an absorption loss of 1 dB(A).

The figures for numbers of residents, with principal and secondary domiciles, are available in 14,466 sections of the municipal area. These residents were proportionately assigned to the storeys of the blocks of flats located in the respective sections. Segments with a total of 17,338 residents could not be precisely assigned. Buildings with mixed use were incorporated into the distribution, and assigned shares of between 25 and 90%, in accordance with their respective use levels.

For the 2012 noise map, the location-corrected network of city streets and motorways from the detailed network of the Senate Department for urban development and environment, including traffic volume (traffic count 2009 cf. Map 07.01 Traffic Volumes (2011 Edition)) , permitted maximum speeds, and information on median strips was adopted. The pavement-reference parameters were updated in the context of a field examination of the road network in the fourth quarter of 2010, and then transferred to the detailed network geometry.

In the model formation for the calculation, the following properties were taken into account:

Data on the principal roads in the State of Brandenburg close to the Berlin border, including the required calculation parameters, have been provided by the Brandenburg State Agency for Environment, Health and Consumer Affairs. The total length of these roads is 523,9 km.

A total of 1940.2 km of roadway have been incorporated into the calculation, of which 1416.3 km are located on the territory of the city of Berlin.

A total of 195.4 km of track of the streetcar network were modelled. Differences in route lengths from the 2007 map are due to the fact that certain segments were digitalized separately for each direction, and overall, a higher degree of detail was digitalized.

The situation of the streetcar network, including the root parameters, is based on the network of the 2007 Level 1 map, with the following modifications:

Streetcar traffic was adopted into the calculation model by assignment of detailed electronic “count slips” of the BVG (as of 2012) to 159 route segments, and the Schöneiche-Rüdersdorf Tram Co. GmbH (Line 88).

The situation of the subway/underground lines, including the root parameters, is based on the network of the Level 1 2007 map, with the following modifications:

The subway/underground traffic was taken into the calculation model by reference to the schedule of the BVG on aboveground segments (as of 2012).

A total of 27.3 km of subway/underground track were modelled.

Plants (see Tab. 3) have an effect on environmental noise if they dampen relevant sound immissions, i.e., those in excess of LDEN = 55 dB(A) and/or LNight = 50 dB(A), from a near-by source. For this reason, and due to new measurement results, the site of the Häfele Co. was removed from the 2007 noise map. The new site of the TSR Recycling GmbH & Co. KG in the Westhafen had to be considered.

A noise emissions report of November 3, 2008, is available for that facility.

For the 18 power plants in the area of the city of Berlin, there was no change compared with the 2007 noise map. 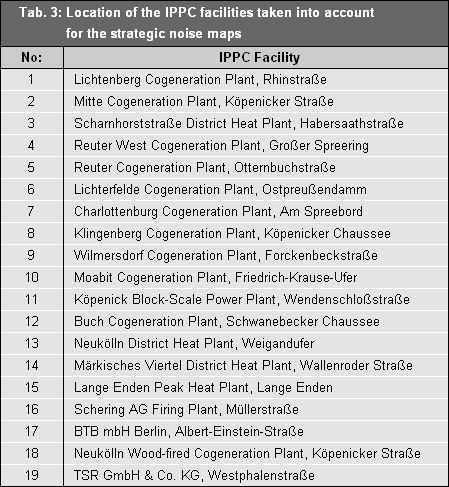 For the aircraft noise calculation at Tegel Airport, the following input data were available:

Note: When Tegel Airport was mapped in 2007, overly low altitudes were assumed for some routes. Moreover, a directional distribution of traffic was undertaken which did not exactly match that of the DES 2011. As a result of these differences, the 2007 flight mapping process resulted in an overestimation of flight noise occurred, with level values which in some cases were higher than the levels obtained during the mapping process in 2011.

For Berlin-Schönefeld Airport, the calculation results of 76,607 aircraft movements were taken from the mapping process of the state of Brandenburg, with reference year 2010.

Moreover, the numbers of people, facilities and plots of land affected were taken from the Brandenburg mapping process with reference year 2015. The corresponding noise map for areas within the state of Berlin was also shown.

Mapping process for the railways subject to the General Railway Act

The Federal Railway Authority (EBA) independently carried out the noise mapping process for the federal railways according to the General Railway Act (AEG). The current data (as of December 2014) can be viewed via the EBA’s map service [in German]. The data were passed on to the Senate Department of Urban Development and the Environment and entered into the consideration of the total values of noise pollution.

The input data were prepared and compiled in a 3D calculation model of the software (IMMI 2012 / IMMI 2014).

Obstructions, such as terrain edges, buildings and noise insulation facilities, were taken into account, with the parameters described in the input data (location, altitude, reflection properties, etc.). The basic model formed from the terrain and obstructions remained as it was for the calculation of all noise types.

The plausibility check consists of a visual check of 3D-views of the calculation model and numerous automatic plausibility queries. The following contexts are automatically checked in this process:

It is not possible to carry out a mapping process which meets the requirements of the Environmental Noise Directive within economically realistic parameters, if the calculation rules are followed completely and strictly. For that reason, calculation parameters were determined in a simplified manner (minimum level at 25 m distance, range of reflection surfaces limited to 200 m, first-order reflection), essentially resulting in a neglect of irrelevant immission effects at certain reception points. As tested and certified, the accuracy requirements for the noise mapping calculation results were met, and achieved an overall accuracy of 2 dB(A).

The Preliminary Calculation Method for Environmental Noise at Roads (VBUS) was used for the acoustic calculations of the strategic noise maps (cf. 34th BImSchV, § 5, Section 1). The noise indices LDEN(weighted 24-h mean value) and LNight were calculated with a step size of 10 m x 10 m at a reception point height of 4 m above the ground.

The number of persons exposed in their dwellings, of schools and hospitals was determined according to the VBEB.

The Preliminary Calculation Method for Environmental Noise at Railways VBUSch and the VBEB (cf. 34th BImSchV, § 5, Sect. 1) were used for acoustic calculation of the strategic noise maps as well as the persons exposed in their dwellings, schools and hospitals. The noise indices LDEN and LNight were calculated with a step size of 10 m x 10 m at a reception point height of 4 m above the ground.

The Preliminary Calculation Method for Environmental Noise Caused by Industrial and Commercial Plants (VBUI) and the VBEB were used for the acoustic calculation of the strategic noise maps, as well as the persons exposed in their dwellings, schools and hospitals. The noise indices LDEN and LNight were calculated with a step size of 10 m x 10 m at a reception point (façade level) height of 4 m above the ground.

The various subject maps made available to the public here represent the noise situation in relation to areas broken down by classes, as provided in the Environmental Noise Directive. Moreover, they also provide the possibility of obtaining factual data by surveys: Maps 07.05.1 through 07.05.10 show the grid values which constitute the basis for the classification, and, for road traffic noise, additional background information about the principal road network registered. Since the grid used for representation in these maps is a 10 m x 10 m grid, the individual statements are not suited for precise evaluation of buildings. For that reason, Map 07.05.11 (Façade Levels at Residential Buildings within the Exposure Range of Main Noise Sources) provides a complete overview of the reception points used on the façades of residential buildings, schools and hospitals, including the immissions levels calculated.