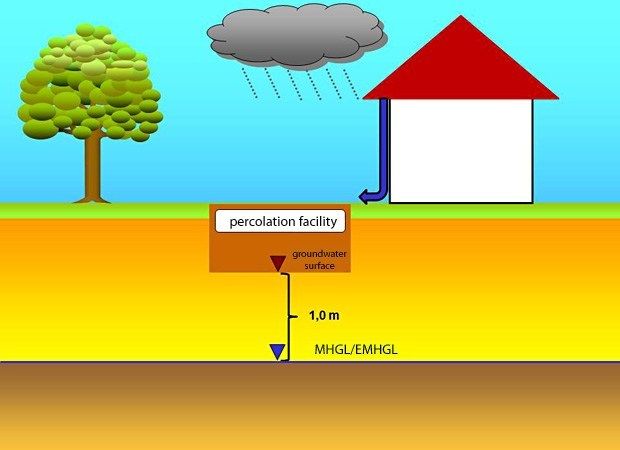 Moreover, in construction, the MHGL can also be used for geostatical calculations in certain cases and may be relevant for other issues of water management and ecology.

In practice, the MHGL is mostly needed for questions directed towards the future. Accordingly, it is only meaningful if the groundwater level can be assumed to behave similarly in the future as in the past. However, this is not the case in large parts of the Berlin city area since the groundwater level has been artificially changed, sometimes permanently, sometimes temporarily.

The permanent measures, which modified the natural geohydraulic conditions to locally different extents in the past and also began at different times, include:

This multitude of possible artificial measures that affect the groundwater illustrates that in some cases it is difficult even for specialists to judge whether and to what extent observed annual maximum groundwater levels from which the MHGL is calculated are anthropogenically influenced and thus to what extent the MHGL can be assumed to be valid in the future. Another problem results from the fact that both the observation periods and the measuring frequencies of the individual groundwater measuring points often differ. On the one hand, there are measuring points which have already been observed for more than 140 years; on the other hand, some have only existed for a few years. The measuring frequency varies between daily measurements, as is the case today for most measuring points of the Senate, and bimonthly and less frequent measurements, which cannot record the actual history of the groundwater level and thus its maximum values as reliably. The MHGLs of the individual measuring points are thus not directly comparable, which is, however, necessary, particularly for interpolation. In practice, the State Geological Service has therefore conducted a rather time-consuming assessment and selection of data for calculating the MHGL in each individual case. (Note: The earlier specification of the 90th percentile value of the groundwater level data of a measuring point for determining a design value for percolation facilities corresponds approximately to the mean highest groundwater level.)

Figure 2 shows three examples of groundwater hydrographs with MHGL values in the Berlin glacial valley: The groundwater measuring points 5476 and 8979 show strong influences from groundwater extractions up to the 1990s; the end of the influence cannot be determined exactly but has to be specified by the specialist in order for the mean highest groundwater level to be calculated. Measuring point 137 has a significantly longer history without influence, from around 1980 on but also in the period from 1965 to 1975. It only makes sense to use the data from the periods without influence for determining an MHGL which is to be used e.g. for planning a percolation facility. 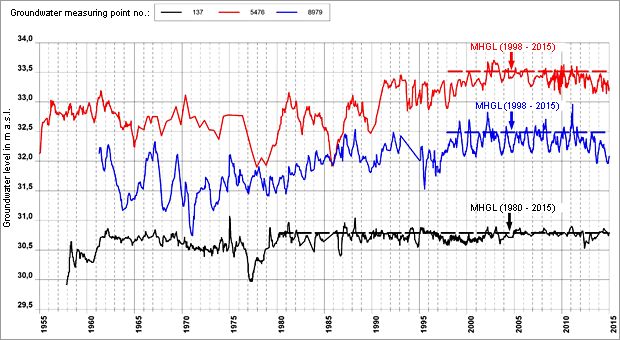 Fig. 2: Groundwater hydrographs from measuring points in the glacial valley with MHGL values for periods with apparently no or only little artificial influence through groundwater extractions or discharges.
Image: Umweltatlas Berlin

For the purpose of both significantly reducing the effort for determining the MHGL and eliminating the problem of artificial, temporary influences on the groundwater level which can result in MHGL values that cannot be used for future calculations, the working group State Geology of the Senate Department for Urban Development and the Environment has developed a map of the expected mean highest groundwater level, or EMHGL in short, from which the desired value can be read off directly. The EMHGL is defined as follows:

According to this definition, the EMHGL is to be expected based on the current state of knowledge under the following geohydraulic conditions:

A higher mean highest groundwater level than the EMHGL can occur in principle, but only as a result of further artificial interventions. Of course such interventions (e.g. discharges into the groundwater) are not predictable in the long term. However, they do not need to be taken into account for most questions, as they require a permission from the water authority in any case.

Currently the EMHGL map has been completed for two areas of Berlin. In geological terms, these are the area of the Berlin glacial valley and the area of the Panke valley. Both (see Figure 3) are characterised in that near the surface their subsoil is composed predominantly of sediments (soils) with high water conductivity and the groundwater surface is generally not deep below ground (depth to the water table of a few metres, sometimes even less than one metre). 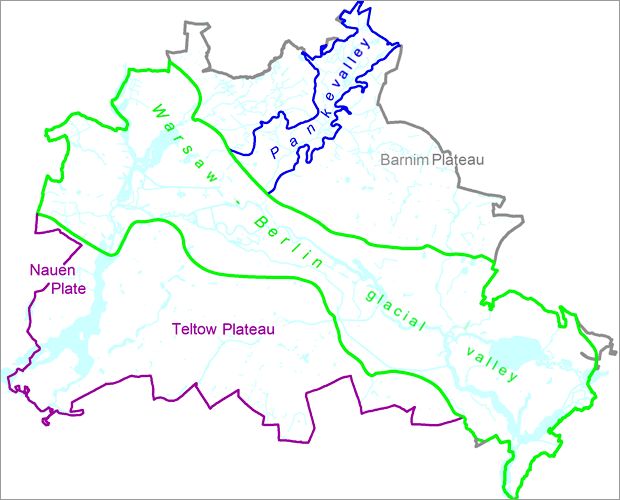 Fig. 3: Area of validity of the EMHGL map for the glacial valley and the Panke valley
Image: Umweltatlas Berlin