As mentioned, the use-related differences in the (summer) temperature behaviour of a city manifest in particular during the night hours with cloudless sky. During the day, the temperature peaks over the individual areas lie much closer together, even when the degrees of development and sealing differ considerably. A figure from the text accompanying Map 04.04 Temperature in Medium Low-exchange Nocturnal Radiation Periods (Edition 2001) is reused here for illustration, as it makes a fundamental point (cf. Fig. 5). 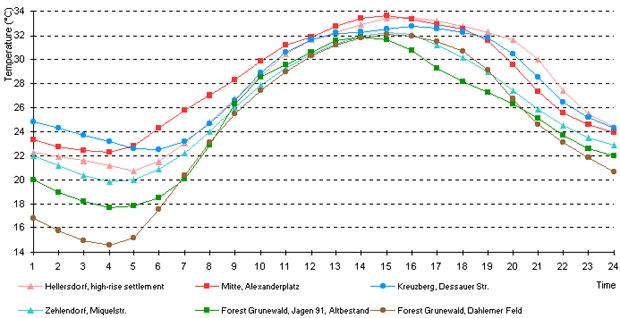 Fig. 5: Diurnal variation of the air temperature at a height of 2 m on a hot low-exchange radiation day (July 8, 1991) at various sites in Berlin
Image: SenStadt 2001

These fundamental effects also affect the use-related distribution of the number of threshold days.

Table 1 shows the mean number of climatological threshold days per area type (06.08 Urban Structure differentiated, as of 2010, SenStadtUm 2011a) for the calculated time periods 1981-2010, 2011-2040 and 2041-2070 as well as the forecast increases compared to the present. Thus it supplements map statements that spatially locate the tabular statements according to the location of the area types.

In principle, it remains to be noted that the projections represent mean value data of the defined time periods that may vary upwards or downwards due to the natural fluctuations of the climate over the course of the decades under consideration (“interannual fluctuations”).

But it also becomes apparent that the model results predict an increase of the frequency per year for all threshold days, the extent of which, however, depends on the threshold day.

So far and also in future, the tropical nights (minimum temperature ≥ 20 °C) occur most rarely compared to the summer days and hot days. However, due to the fundamental effects related to the diurnal variation this case exhibits the greatest differentiations between the individual area types. The strongest nighttime cooling effects and thus the lowest expected number of tropical nights (> 2 to 5 in the time period 1981-2010) occur on green and open spaces with open structures. Mainly agricultural areas (“farmland” as well as “grassland”), fallows with meadow-like structure (e.g. the meadows of the airports), but also allotment gardens, and by far the parks stand out in this respect. The latter also comprise forest-like portions, whose radiative power is curbed by the canopies at night. The area types mentioned also exhibit the lowest values and potential loads with respect to the future time periods. In the time period up to 2070, a number of tropical nights of the order of > 12 to 20 days is expected there, which is close to a fivefold increase.
Conversely, today and in the future the largest values occur for area types with a high degree of development and sealing, e.g. for the types “core area”, “dense block development” and “commercial and industrial area with dense development”.

According to Fig. 5, the threshold days that refer to the daily maximum temperature (summer day and heat day) lie much closer together in their absolute values and also in the increases for the future. However, the absolute numbers for the probabilities of occurrence differ considerably.

As described in the chapter “Results of the station evaluations” for Map 04.13 (SenStadtUm 2015), the number of hot days in Berlin has been rising for decades. The climate modelling using WETTREG 2010 A1B shows that in future this rise will be much more rapid. While 5 (forest area) to barely 10 (airport, traffic area, but also open vegetation area) hot days are assumed in the analysis period 1981-2010, there will likely already be 19-24 such days in 2041-2070, with the distribution with respect to area types unchanged.

These results lie slightly above the calculations carried out in the framework of the AFOK (main report “Adaptation to the Impacts of Climate Change in Berlin (AFOK)”, partial climate protection concept, Chap. 3.1.2 Temperature Extremes, Reusswig, Becker et al. 2016) using the Scenario RCP8.5 (IPCC 2014). In that case, the majority of the models employed expect an increase in hot day events on the order of up to a doubling for the “near future” (2031-2060).

In the case of the forecast development for the summer days, which in this study by definition includes the number of hot days, the individual area types also lie relatively close together. The range lies between 38.1 event days in forest areas and 43.5 at airport sites for the initial time period 1981-2010. By the end of the time period 2041-2070, the number of summer days per year will increase approximately by half and thus lie above 60 days per year throughout. 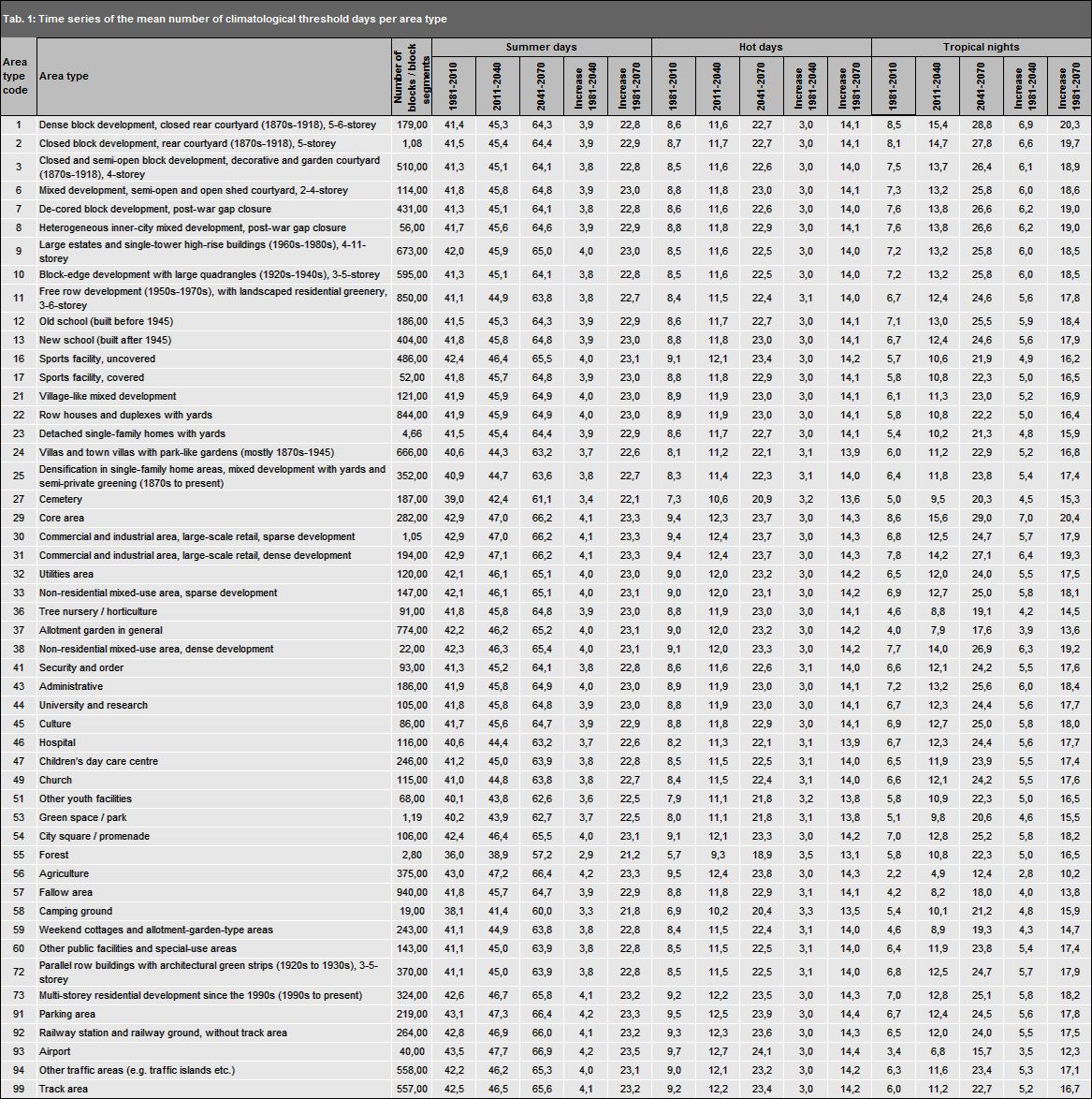