The data bases for the calculation of runoff parameters were taken from the Berlin Environmental Information System (EIS), specifically from the 25,000 individual areas of the EIS spacial reference system. Only a few parameters were determined especially for this project. Most data bases came from long-term work for the Environmental Atlas and the EIS, and they were available for diverse evaluations and calculations.

Land use data are based on the evaluation of aerial photography, district land use maps, and other documents used by the Environmental Atlas (cf. Map 06.01, SenStadtUm 1995a, 1996c, and Map 06.02, SenStadtUm 1995b, 1996d). About 30 use types were differentiated, and they reflect the use situation in 1990, except for a few later entries.

The long-term precipitation means from 1961 to 1990, including the yearly mean and the May-to-October summer half-year mean, were calculated from measurements made by 97 monitoring stations maintained by the FU – Free University of Berlin and the German Weather Service (Deutscher Wetterdienst) (cf. Map 04.08, SenStadtUm 1994, 1996b). Data from this model were calculated for the midpoint coordinates of the block segments.

Potential evaporation used the longterm means of the 10% increased TURC-evaporation. This was calculated from observations made by climate stations in the Berlin area. Districts in the urban area were allocated 610 to 630 mm/a; and for the summer half-year they were allocated 495 to 505 mm.

Degree of sealing was determined by evaluating aerial and satellite photography, a map of Berlin at 1 : 4/5,000, and the urban planning data file for each block segment. Streets were not initially included (cf. Map 01.02, SenStadtUm 1993, 1996a). The data file differentiates between built-up sealed surfaces (including roofs) and non-built-up sealed surfaces (parking lots, pathways, etc.). The type of sealing material is an important initial parameter for non-built-up sealed surfaces. Surface sealing types are differentiated into four classes (cf. Tab. 2). These classes were determined at test areas in terrain for specific individual building structure types; they were then referenced for all block segments of the same building structure type. The surface sealing classification for individual area segments in aerial photography sometimes deviated from general values.

Statements on the degree of sealing of streets were taken from Berlin Building Administration statistics on streets and covering materials. Used sealing types were included into the sealing classes mentioned above. These statistics were only available for boroughs; the degree of sealing and sealing type were given a general value for all areas of each Berlin borough.

Depth to groundwater from the surface was initially developed in a model of terrain elevations based on digitalizing and interpolating about 85,000 individual data on terrain heights (cf. Map 01.08, SenStadtUmTech 1998a). Parallel to that, a model of depth of groundwater from the surface was constructed from values given by observation wells of the State Groundwater Service in May 1995. The depth to groundwater data used for calculating runoffs were themselves calculated from the difference model from the Terrain Elevations Model and the groundwater depth model (cf. Map 02.07, SenStadtUmTech 1998b, 1998d). These data were calculated for the midpoint coordinates of the block segments.

Area sizes were used to calculate flow volumes. The area size of block segments (without streets) is available in the EIS. Additionally, the estimated area of streets was given in relation to individual block segments. To that, existing statements on street area size at the level of statistical areas were transposed area-weighted into area segments.

Statements on the sewage system were taken from the map, ”Disposal of Rain and Sewage Water” (cf. Map 02.09, SenStadtUmTech 1992), which has been transposed into digital form recently. The criteria was the existence of rainwater drainage in the adjoining street. The statement is thus initially independent on the actual diversion of rainwater. It can only be read from the map if the block is registered at all with the sewage system. The map was worked out at the beginning of the 90´s. Individual changes and extensions have mainly to do with areas that do not discharge their water through water works networks. These changes and extensions are based on the knowledge and experience of Environmental Department employees. It can be assumed that some highly sealed areas (mostly industrial and commercial areas) discharge their rainwater by way of private pipelines or the public network, but no information about this exists. 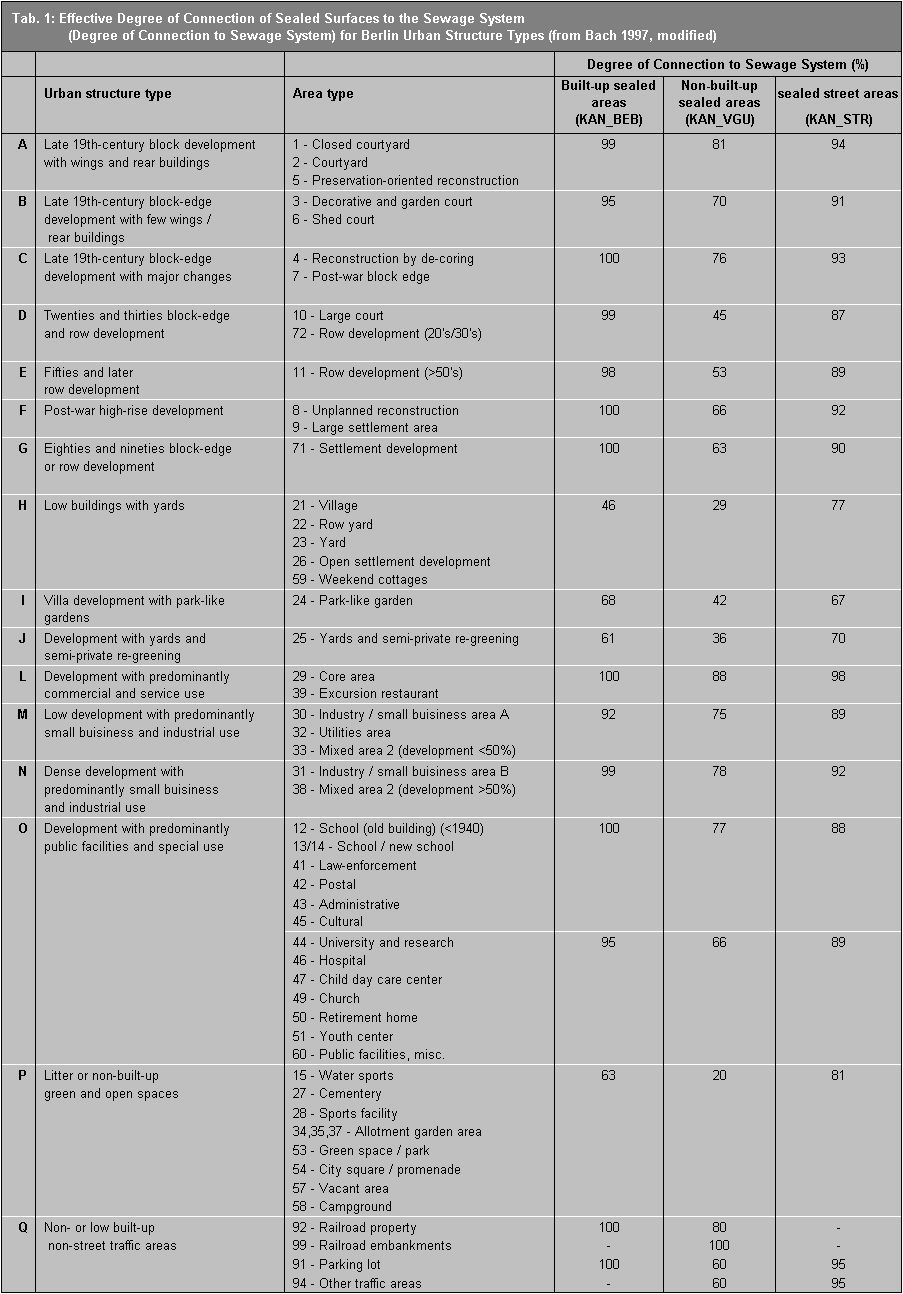