The map is based on the topographical General Map of Berlin, scale of 1 : 50,000, in grid format, and the geological outline for the Berlin state territory, at a scale of 1 : 50,000, which was derived from the geological General Map of Berlin and Surrounding Areas, scale of 1 : 100,000. In addition, the used groundwater observation wells, as well as the individual waterworks are indicated, with their active wells and the water protection areas.

On the plateaus, the main aquifer is extensively covered by the glacial till and bolder clay (aquitards) of the ground moraines. Wherever the potentiometric surface of the main aquifer lies within such an aquitard, groundwater conditions are confined. In sandy segments above the till or in isolated sand lenses, near-surface groundwater may be formed, which is also called stratum water (see also Fig. 3). After extreme precipitation, it may rise to the surface. The groundwater levels of these locally highly differentiated areas have not been separately determined and portrayed.

In the Panke Valley, on the northern side of the spillway, the Barnim plateau, a major independent coherent aquifer has developed. It is located above the main aquifer, which is covered by the glacial till of the ground moraine (see also Figs. 7 & 8). On the present map, this aquifer is indicated by separate blue groundwater isolines. The glacial till is thinning out toward the Warsaw-Berlin glacial valley and the Panke Valley aquifer is interlocking with the main aquifer.

In general, the hydraulic gradient in Berlin, and hence, the flow direction, is from the Barnim and Teltow plateaus and the Nauen Plate toward the rivers of Spree and Havel. Depression cones have formed around the wells that were active during the measurement period, and have lowered the groundwater level below the level of the neighbouring surface waters. Thus, in addition to inflowing groundwater from the landside, the water pumped here includes groundwater formed by infiltration (bank-filtered water) from these surface waters (see also Fig. 4c).

Current Situation in May 2020

Figure 10 shows the general development of the groundwater levels as a deviation from the 20-year median from a total of characteristic observation wells in different hydrogeological areas. The reference date for every year is the date for which the groundwater level map is created (May 15th) for the period 2000 to 2020. The location of the hydrogeological areas of the Teltow plateau, Barnim plateau, Warsaw-Berlin glacial valley and Nauen Plate/Grunewald is shown in Figure 11.

Fig. 10: Deviation of the groundwater levels from the 20-year median from a total of characteristic observation wells in different hydrogeological sub-areas of Berlin on the reference date of May 15th in the years 2000 to 2020

In the areas Barnim plateau (orange), Teltow plateau (dark red) and Nauener Platte/Grunewald (yellow), the groundwater conditions are predominantly confined, which is why the levels show larger fluctuations. The influence of the dry weather years is apparent.

In the Warsaw-Berlin glacial valley (green), on the other hand, there are unconfined groundwater conditions and the groundwater levels are subject to less fluctuation. In addition, the groundwater hydraulics in this area are dampened by the regulation of the surface waters. 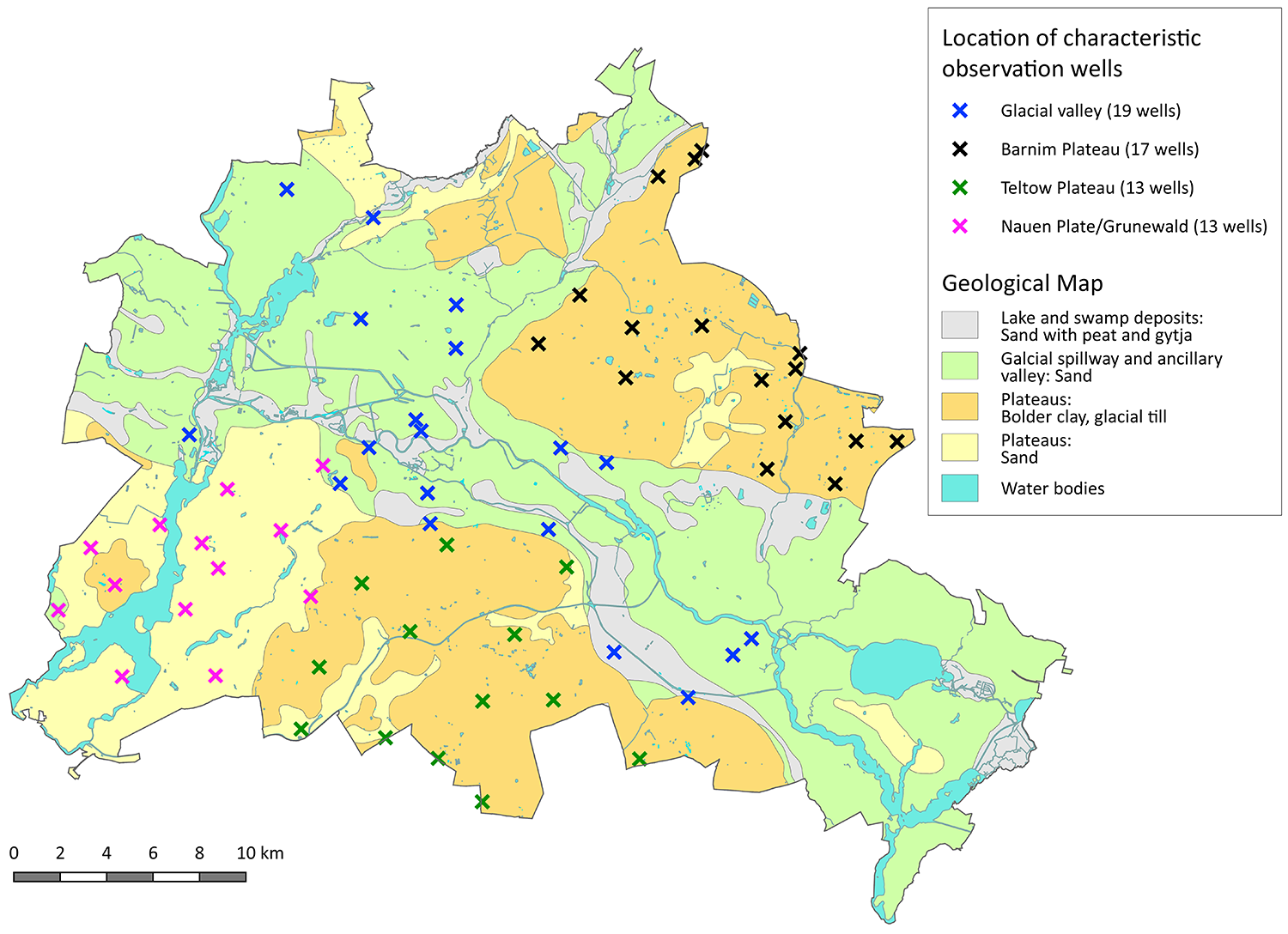 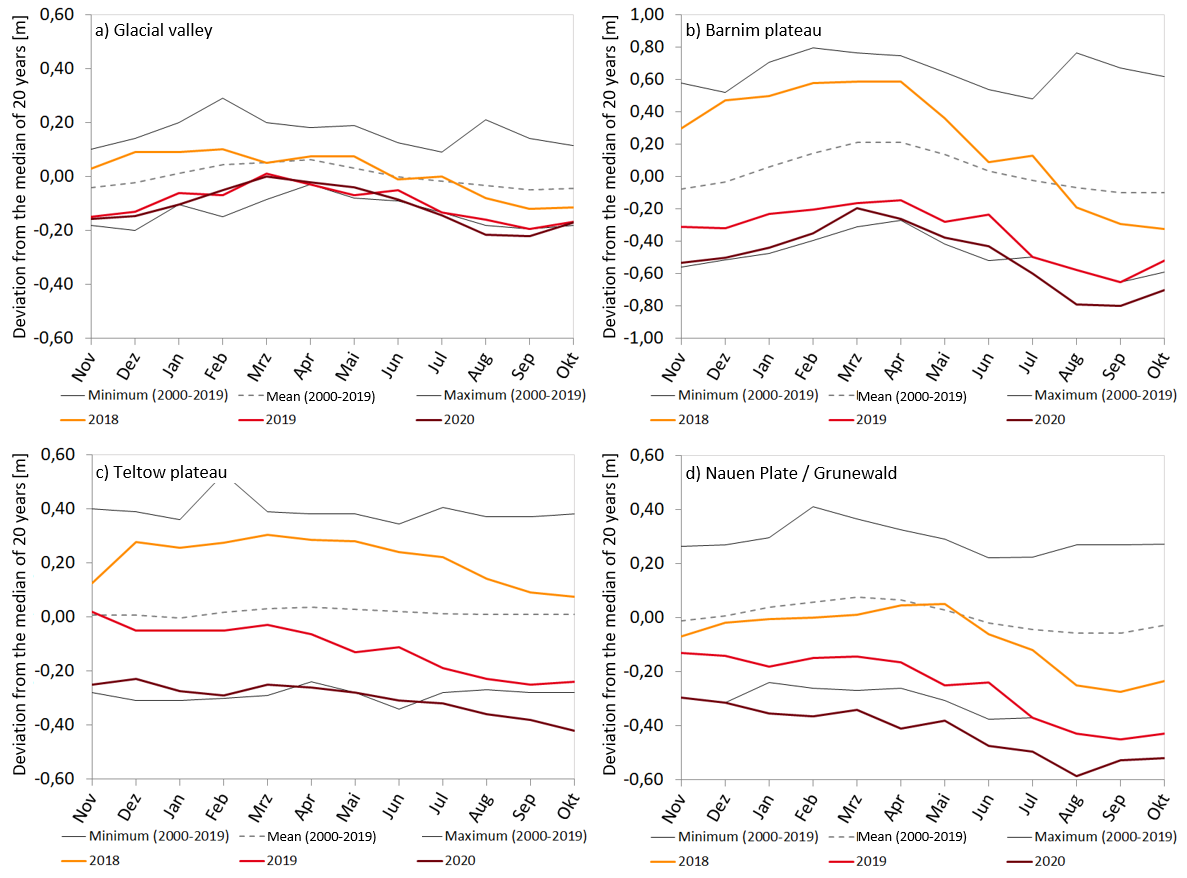 In the Warsaw-Berlin glacial valley (Figure 12a), the low groundwater levels throughout the entire observation period are mainly a result of the dry year 2018. During 2018, groundwater levels decreased by around 0.20 m. This deficit was not restored in 2019 and 2020, which is why the groundwater levels were still below average in these years.

The lack of precipitation in 2018 and 2019 results in a delayed reaction of the negative trends in groundwater levels in 2019 and 2020. Because of the drought years, and contrary to the normal seasonal course, there was no increase in groundwater levels between November and April in the hydrogeological areas of the Teltow Plateau and Nauen Plate/Grunewald (Figure 12d) in 2019 and 2020. This suggests that no significant groundwater recharge took place in these areas during the dry years.

Fig. 13: Development of the raw water discharge since 2000

Information on the expected highest groundwater level (EHGL), which is an important basis for planning the design of buildings, can be found in the Environmental Atlas under: Map EHGL (Limberg et al. 2015).