The results obtained in the course of the climate investigations for the Berlin Environmental Atlas have permitted the development of a comprehensive inventory of the climatic situation in the urban area and in the nearby surrounding countryside. In addition to a multitude of fundamental data, such as air and surface temperatures, vapor content of the atmosphere and near-ground wind speeds, the Maps 04.02 – 04.06 and 04.09 (SenStadt 2001 a-d and SenSUT 1998) also contain derived information on bioclimatic stress potentials.

The inventory documents the connection also confirmed in many other investigations between the climate of different urban areas and their building, open-space and vegetational structures. The typical local climate emerges however as a result not only of the structure of an urban area, but also of the situation within the city itself. Thus, different spaces within a city can be affected by mutual interaction, or by interaction with the surrounding countryside. The temperature differences of adjacent areas are of decisive significance for the climatic exchange in this context. A reduction of these differences, e.g. through an increase in the density of construction, or an equalization of the structures, is detrimental to the urban climate.

The purpose of this map is to delimit urban areas according to their climatic function and their effect on other areas, and to assess the sensitivity of this function with respect to structural change. On this basis, measures for the maintenance and/or improvement of the climatic situation can be developed. Updating of the state of information as of 2000 has also permitted the construction projects of the ‘90s to be taken into consideration.

The local climate is always formed within the context of the overarching general weather situation. As a rule, high-exchange weather conditions with wind speeds of over 4 m/s also have an equalizing effect in terms of both climate and of air purity in heavily built-up inner-city areas. By contrast, problem weather conditions appear primarily at low wind speeds (under 4 m/s), high-radiation intensity and cloud cover of less than 4/8. Also, the heat and vapor contents introduced by the large-scale inpouring of atmospheric air masses influence the formation of local climate conditions.

Table 1 shows the proportional shares of particular weather conditions for 1991 through February 1993, differentiated between summer and the remaining seasons. 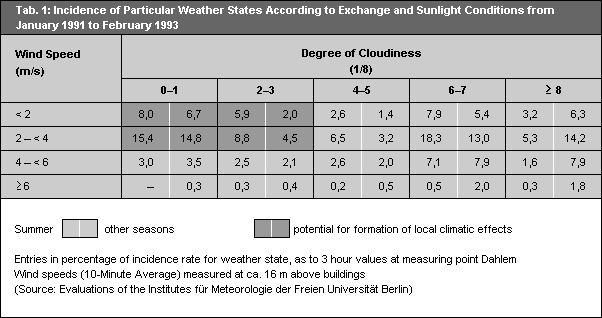 Especially in view of these spatially caused problem weather conditions, climatically favorable structures and structures which provide relief are of great significance. These include on the one hand extensive open spaces near the periphery of cities with offshoots extending, in some cases, as far as the city center. Determinant for their degree of efficacy are the terrain-relief situation, vegetational structures and the density of development in the transition areas between the city center and the surrounding countryside. Even slightly sloped valleys or ventilation paths leading toward the city can serve a climatic effect and provide clean-air relief, if they are openly structured.

With increasing distance from the outskirts and reduced connections to the climatic equalization areas of the surrounding countryside, small-scale wind systems between inner-city open spaces and their immediate environment gain in importance. The air masses ascending over the built-up warmed area are replaced by cool air from the adjacent open spaces (plain wind effect). Within the green spaces themselves, a strong decrease in ventilation is to be expected, depending on the vegetation structure. At low exchange weather conditions, the near-ground cold air formed there causes additional stabilization of the near-ground air layer. Thus the pollution risk to green spaces must be classified as very high. This shows clearly that the positive effects of open spaces on the environment can only be fully unfolded if climatic equalization spaces are not burdened by near-ground emitters. The spatial extent of the impact area is determined by the structure of building development around its edges.

Investigations and measurements in the Great Tiergarten illustrate the connections described; however, they refer to conditions prior to the extensive construction activity of the ’90s. The temperature differences measured between the internal area of the Tiergarten and the heavily built-up adjacent areas to the southwest and to the north amounted to 7ºC. The broadly laid out streets within this open space led to a break-up of this island of coolness into several parts (Horbert and Kirchgeorg 1980). The elevated city rapid-rail and main-line rail line hindered the exchange of air between the Tiergarten and the neighboring area to the north and northwest. By contrast, considerable extents could be ascertained at the underpasses in the south and east. To the west, the impact extends along the Strasse des 17. Juni up to Ernst-Reuter Platz, and then southwest to Breitscheidplatz (von Stülpnagel 1987).

The results of the construction in the Potsdamer Platz-Ministerial Gardens-Pariser Platz / Brandenburg Gate area up to the Spree Bend are elucidated in the climate maps mentioned above and also here, under Map Description.

Due to the limited amount of open space, measures for the relief of urban areas, including their built-up and densely-developed areas, are necessary. Of considerable importance in this regard is the greening of city spaces, streets, buildings and courtyards. In this way, overwarming can be decreased, the moisture level of the air can be increased, and dust can be bound.

The warming of roofs depends very greatly on their color and their material (cf. Map 04.06, SenStadt 2001d). Most favorable are greened roofs, with the type of plants playing a major role. However, the positive effects of such roofs, at their high locations, on the greatly burdened street area must be considered as limited. The greening of facades might have a greater overall climatic impact. Extensive investigations into the significance of facades and roof greening for the micro-climate were carried out in Berlin by Bartfelder and Köhler (1987).

The landscaping and/or the planting of vegetation for courtyard areas is also part of the climatic and clean-air improvement of residential areas (Horbert, von Stülpnagel, Welsch 1986, Horbert 1992). Narrow closed courtyards are characterized by a decrease in daytime temperatures and a slight cooling in the evening and nighttime hours. Insolation is greatly limited, as is air exchange, which creates a high pollution risk. The climatic condition improves with the greening of these courts, although wall-greening is more favorable for the promotion of air exchange than the planting of trees. Large courtyards achieve clearly more favorable climatic characteristics than narrow courts and street areas, especially, if the degree of sealing is low and the vegetation loosely structured. The cooling rate in the evening and nighttime hours is high. The air exchange is very good. A connection with adjacent smaller courtyards via vacant lots promotes this ventilation.