The thirteen structure types with predominantly residential use cover approximately half of the built-up area of Berlin. 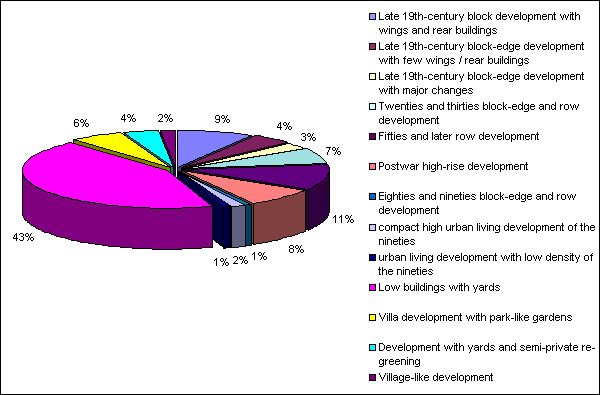 Fig. 2: Shares of Structure Types with Predominantly Residential Use in their Total Area, in Percent, height of areas based on ISU5, segment block map
Image: Umweltatlas Berlin

In terms of the distribution among the Berlin boroughs, a different picture emerges, however (cf. Fig. 3).To be able to draw a comparison with other editions the figures are shown for the boroughs before the administrative reform from 2001. 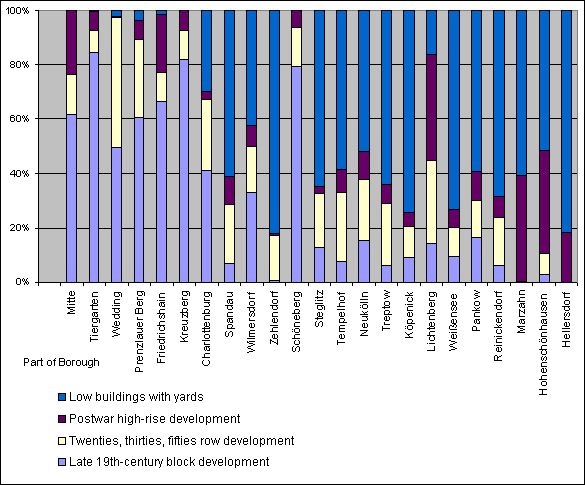 Fig. 3: Shares of the Structure Types with Predominantly Residential Use in their Total Area, in the Berlin districts (Boroughs before the administrative reform from 2001), in Percent
Image: Umweltatlas Berlin

In Tiergarten, Kreuzberg and Schöneberg, a relatively high share of the residential area – approx. 80 % – is preserved as late 19th-century block development, much of which has, however, been altered massively. In the district of Wedding, late 19th-century block development and row development account for half the residential area. The district of Reinickendorf has the greatest share of row-type construction, followed by Spandau and Neukölln. The high-rise development of the postwar era occurs is no where to be found in Zehlendorf, but is an outstandingly high share of approx. 40 % in Lichtenberg, Marzahn, Höhenschönhausen and Hellersdorf. The low buildings with yards structure is entirely absent in the inner-city districts of Mitte, Friedrichshain, Kreuzberg and Schöneberg, while accounting for approx. three-fourths of the residential area in the outskirts districts Zehlendorf, Köpenick, Weissensee and Hellersdorf.

One finds the late 19th-century closed block development with wings and rear buildings, hardly changed since their origin, in large parts Charlottenburg and Wilmersdorf between the Lietzensee (Lake), Kurfürstendamm, Richard-Wagner-Strasse and Spandauer Damm. The narrow development with the typical courtyard structure has also survived to a large degree in Moabit and Wedding, in Friedrichshain between the City Rail Circle Line and Petersburger/Warschauer Strasse, as well as in the districts of Kreuzberg, Neukölln and Schöneberg between the corridors Neukölln Schiffahrtskanal (Ship Canal), Skalitzer Strasse, Gitschiner / Karl-Marx-Strasse, Gneisenaustrasse, Yorckstrasse and Potsdamer/Hauptstrasse.

One finds the late 19th-century closed development with few wings / rear buildings, including the section types “decorative/garden court” and “shed court,” in the former suburbs of Berlin outside the City Rail Circle Line. This construction structure, too, has hardly changed since its origin. Large areas exist in Friedenau, Steglitz, Tempelhof, Friedrichshagen, Oberschöneweide, Karlshorst, Pankow, Niederschönhausen, Spandau and in the borough of Reinickendorf west of Provinzstrasse.

Large areas of late 19th-century closed block-edge development with major changes, which emerged as the result of war-time destruction and reconstruction, or of reconstruction with massive demolition of late 19th-century block development, are found within the City Rail Circle Line, particularly in Charlottenburg between Otto-Suhr-Allee and Bismarckstrasse and along Spandauer Damm, in Tiergarten around the Spree Bend and Invalidenstrasse, and south of the Landwehrkanal (Canal) around Potsdamer Strasse, in Wedding between the City Rail Line between Nordbahnhof, Gesundbrunnen and Bernauer Strasse, and in Friedrichshain west of the Warschauer / Petersburger Strasse corridor and, east of these streets, in the area of Frankfurter Allee. Also in the districts of Schöneberg and Wilmersdorf, there are many areas in which the typical late 19th-century courtyard structure was changed significantly by reconstruction and renovation.

In terms of the distribution among the existing Berlin boroughs, no different picture emerges. The shares are displaced for example in Mitte where the high share of row development in the former borough Wedding reduces the total share due to the low share from Tiergarten and former Mitte. 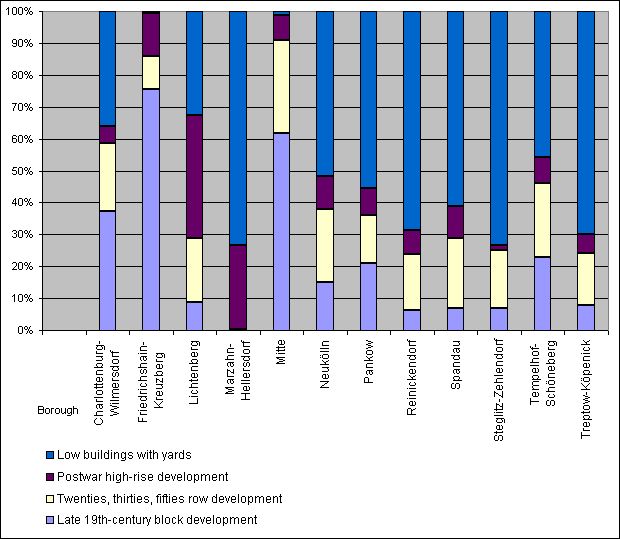 Fig. 3a: Shares of the Structure Types with Predominantly Residential Use in their Total Area, in the Berlin districts, in Percent
Image: Umweltatlas Berlin 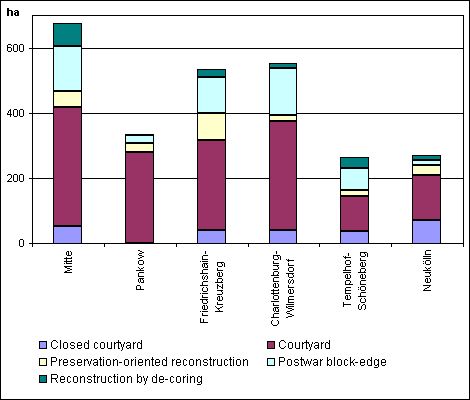 In Prenzlauer Berg, Kreuzberg, Charlottenburg and Neukölln, very much late 19th-century development of the section types “closed courtyard” and “courtyard” is still preserved in its original form. The share of very dense development of the type “closed courtyard” is relatively high in Neukölln, Wedding and Kreuzberg. Late 19th-century preservation-oriented reconstruction, under which the original block structures were largely preserved, occurred most prominently in the borough of Kreuzberg. In the districts of Tiergarten, Friedrichshain and Wilmersdorf, war-damaged late 19th-century block development was largely eliminated and replaced, particularly by new buildings of the “postwar block-edge” type. “Late 19th-century development with major changes” and “reconstruction by de-coring” became increasingly common in the district of Wedding.

The fifties and later row developments were erected mostly in the Berlin outskirts, outside the City Rail Circle Line. They were laid out on former open spaces (agriculture areas, etc.) without regard to existing transportation corridors or construction structures. Within the Circle Line, formerly built-up areas were replaced by row development. This includes large areas in Kreuzberg, Mitte and Friedrichshain, but isolated areas with row development on top of former late 19th-century block structure also exist in other inner-city districts.

The eighties and nineties block-edge and row development of the prefab concrete construction type occurs mainly in Hellersdorf and Marzahn. Smaller settlements were built in Köpenick and Hohenschönhausen.

The areas of the type compact, high urban living development of the nineties, realized usually in the framework of town-planning development projects, are located mainly at the edge of the eastern part of the city, as in Karow north and Buchholz. Some of the big housing projects like e.g. the Rummelsburger Bucht are situated also in the city center. The biggest project in the west part of the city is the water city Spandau.

The structure type urban living development with low density of the nineties with approximately 90 separate areas, also was erected normally in the east part and at the outskirts in Pankow or Treptow-Köpenick. However, you can find this type isolated also in Steglitz-Zehlendorf and Spandau. Construction structures with yards are as a rule found only on the outskirts of town. These low, single-family and duplex houses with yards are to be found in the entire outskirts area.

One finds the development with predominantly commercial and service use frequently in the old central business districts of the various parts of town. This applies particularly to both the city center areas of West and East Berlin concentrated around the Kurfürstendamm/ Tauentzienstrasse and/or around the Alexanderplatz/ Friedrichstrasse.

Detailed information about structure types which do not serve predominantly the residential use are found in the Umweltatlas Maps 06.01 “Actual Use of Built-up Areas” and 06.02 “Inventory of Green and Open Spaces.”