In order to justify the significance of the environmental field of urban climate as comprehensively as possible, extensive model simulations were carried out for the first time in the year 2002/2003 with the mesoscale climate model FITNAH 3D (see Methodology) (SenStadt 2003, SenStadt 2004). The necessary input data and the analysis results were prepared in this first application in a spatial resolution of 200 m x 200 m, in the update of 2008/2009 (SenStadt 2009) then with a resolution of 50 m x 50 m. According to the recording accuracy possible at that time, the results of the model-based climate analysis primarily permitted assessments of the climatic situation and possible effects of construction projects at the level of superior or sub-spatial planning of scale level 1:50,000 till 1:5,000. On the other hand, for actual projects in the scope of the binding urban land-use planning with a scale level of ≤1:5,000, the detailed assessments required there at the level of the individual building structures could not be achieved till now.

Owing to the central importance of the geo-data of the environment atlas for the topic of urban climate, therefore, it became absolutely necessary to provide information with a spatial higher resolution.

For this purpose, the EFRE project “GIS-supported modelling of parameters relevant for urban climate in the basis of high resolution building and vegetation data” was carried out from 2013-2015.

This project was financed by European Funds for Regional Development (EFRE) and the City State of Berlin (project number: 027EFRE GDI) for measures for building up the geo-data infrastructure (GDI) (SenStadtUm 2015).

In the scope of the project, the urban area of Berlin as well as the surrounding region with a total area of around 1,800 km2 was analysed and evaluated with respect to climate in a resolution of 10m x 10m. The processing of an investigation area of this expansion with a screen width of only 100m2 represented a first country-wide at the time of study and required model attributes of FITNAH-3D optimised and customised mainly to these requirements.
Figure 1 illustrates the multiplication of the detailing of the spatial resolution in the steps 200 m x 200 m to 10 m x 10 m (factor 400). 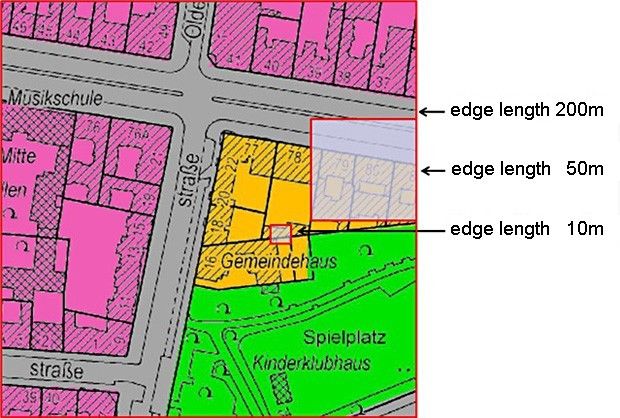 Such an extensive refinement of the spatial resolution of the modelling also requires, at the same time, correspondingly detailed data basis, which were available especially with high-resolution building and vegetation data (SenStadtUm 2014, see Statistical Base).

The 10 m x 10 m screen resolution now available enables a usability of the analysis results also for the evaluation and assessment processes at the level of the binding urban land use planning (land use plan level) or of the corresponding projects.

A modern climatic analysis designed for practice must particularly encompass the process system of air-exchange flows, and attempt to make a connection between these processes and the structuring of the area under investigation into spaces which are favorable and unfavorable, respectively, in terms of urban climate and air-quality. These two terms describe, from a climatic viewpoint, the structure of an area into compensation spaces, affected spaces and connecting structures (air-stream channels), and an understanding of such an area as a construct consisting of compensation and stress areas.

“A compensation space is thus an undeveloped space characterized by vegetation, which by generating cool and fresh air, can reduce or eliminate air-quality or bio-climatic burdens in an affected space via functional exchange interaction. An impact area is a space which is burdened, built-up or planned for construction, and which is connected to an adjacent compensation space via air exchange processes, or to a non-adjacent compensation space via an ventilation lane” (cf. Mosimann, Frey, Trute and Wickenkamp 1999). This procedure thus breaks fundamentally with the previously common static view based on urban climate zones, which subdivided the area of investigation into spatial units in which the micro-climatically most important factors were relatively homogeneous and the effects hardly differed (cf. VDI 1997).

The approach of model use selected here with combined evaluation of statistical base data of climate stations operated for many years (SenStadtUm 2015a) has the following important benefits:

This investigation, too, supports the repeatedly confirmed connection between the climate of various urban areas and their structure in terms of buildings, open areas and vegetation. However, the typical local climate is not only generated by the structure of an urban area but also by its situation within the city. Hence, different areas of a city can interact mutually, or with the surrounding countryside. The temperature differences between neighboring areas are of decisive importance for the climatic exchange. A reduction of these differences, e.g. due to an increase in the structural density, or the uniformization of structures, will cause the urban climate to deteriorate. The objective of the present updated maps 04.10.01 – 04.10.07 is to present the results of the current application of climate modelling.

As compared to the last edition of 2009, the range of topics of the parameters shown was extended, with respect to the evaluated parameters as well as also the spatial differentiation by offering now the original screen resolution as well as the averaged block (partial) area values as the basis for the planning advice map in the Geoportal (see Method, SenStadtUm 2016).

In order to achieve comparability with the climate parameters already published in the Digital Environmental Atlas, the distribution of air temperature during two time segments is also presented, although a direct comparison of the map representations based on measurements and analogical conclusions with the results of simulations of model applications requires that the differing frameworks be taken into account. This advice has also be considered when comparing the results of the both FITNAH model applications of the 2003/2004 edition and 2009. As on the one hand scope and level of detail of the input data, and, on the other hand, model enhancements may result in differing findings and classifications.

Moreover, the representations of the spatial delimitation and quantification of the autochthonous air exchange processes are of special significance. The term “autochthonous” describes climatic events which occur locally or independently (that is without outside effects, e.g. extensive wind flows; the opposite is “allochthonous”). They are based in the climatic effectiveness of the particular utilization structures in their respective environments, and thus provide a sound basis for the derivation of concrete planning recommendations.