The following units characterize the municipal area geomorphologically, which was formed by the Weichselian Glaciation stage, the most recent glacial stage, during its Brandenburg sub-stage:

In the northwest, the plateau is bisected by the Panke Valley with its valley-sand deposits, running coarsely northeast to southwest.

The Warsaw-Berlin Glacial Spillway, which runs coarsely from east to west, and is characterized by great thickness (up to about 50 m) of accumulated glacio-fluvial, and also some fluvial sands and gravels, occupies the central portion of this area. Locally, rubble horizons and till residues are embedded. Locally, this covers sands of glacial valleys of younger holocene sediments (sands, peat and peat clay mixed with organic material), sometimes of considerable thickness.

The sediments portrayed on the map can be described as follows, from top (from the younger strata) to bottom (to the older strata):

Holocene sediments (humus sand, peat, gyttja, qh//Hm, Hn, F), some with thicknesses of more than 10 m, can be found primarily in the area of the glacial spillway and the Panke Valley. They usually are in the area of former or existing watercourses or bodies of water, and are as a rule unfavourable construction land (Tab. 1 and 2).

Dunes which were blown on in the fading-away Weichselian Glaciation and in the early holocene consist of medium-sandy fine sands (qw-qh//d). They are usually few meters thick, however, also can reach altitudes over 10 meters.

In the Warsaw-Berlin glacial spillway, the sand of glacial valleys (qw/S/ut) is mostly more than 10 m thick; under it are the sediments of the Saalian Glaciation.

In the upper strata, the sand of glacial valleys is fine to medium-granular, to some extent slightly silty; with increasing depth, it becomes coarser, and frequently contains gravelly additions.

The same sand sequence (qw/S/ut) can be found in the Panke Valley, a side valley of the glacial spillway, except that its thickness is only seldom more than 10 m.

Locally, till layers occur as erosion residues, traces both of the Weichselian and the Saalian Glaciation ground moraines.

Due to its friable nature, the sand of glacial valleys has high water conductivity, and is a good aquifer. 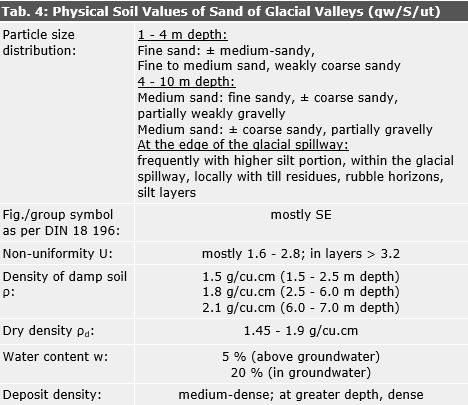 Meltwater Sand of the Plateaus

These sediments include the meltwater sands (qw/S/gf) above, within (intralattice) and beneath the Weichselian Glaciation ground moraine.

The extensive meltwater sands ascertained above the ground moraine can contain a share of late Pleistocene to Holocene outwash mass. They show a wide range of granulation thickness, from silty fine sand to coarse sand, and also very variable thickness.

Moreover, intralattice sands occur within the till, usually only locally, and generally with low thickness. Petrografically, it is not possible to distinguish between these sands and the glacio-fluvial meltwater sands, so that it is often difficult to delimit between the Weichselian and the Saalian Glaciation till.

The meltwater sands have high water conductivity and constitute a good aquifer, due to their friable character. 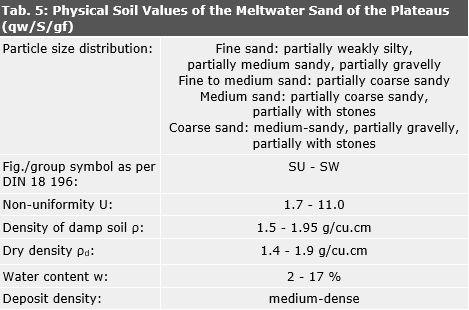 Debris Loam/-Marl of the Weichselian Glaciation

The ground moraine of the Brandenburg substage of the Weichselian Glaciation forms a coherent horizon of till (gw//Mg) of 5 -10 m (in come cases, more than 10 m) thickness, overlaid locally by meltwater sands. Petrographically, it consists mostly of weakly clayey, silty, and chalky sands, with a small proportion of gravel and stones and, rarely, ice-age boulders. At the surface, the till has been decalcified by weathering to debris loam.

Due to its clay and silt portions, the till or loam constitutes a binding sediment which has very low water conductivity (aquitard).

The areas of the ground moraine covered by sands as well as those on the plateau edge have been reduced in thickness, largely due to erosive use. 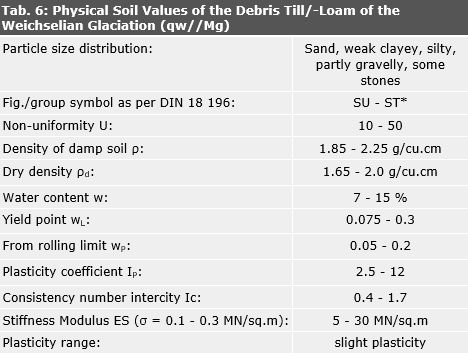 Sediments of the Eem Interglacial

The sediments of the Eem interglacial (humus sand, peat, gyttja, qee//Hm, Hn, F) can essentially be found only in the area of the Barnim plateau, and there mostly in the Panke Valley. They are as a rule confined to small-scale occurrence of very low thickness.

Till of the Saalian Glaciation

In the area shown, the ground moraine of the Saalian Glaciation (Warthe substage) is the oldest geological formation to a depth of 10 m. The Saale-stage till consists of weakly clayey, silty to strongly silty chalky sands, with a small proportion of gravel and stones (qs//Mg). Ice-age boulders can also be found occasionally.

Intralattice sands can also be found in the Saale-period till.

Due to its clay and silt portions, the till constitutes a binding sediment with very low water conductivity (aquitard). 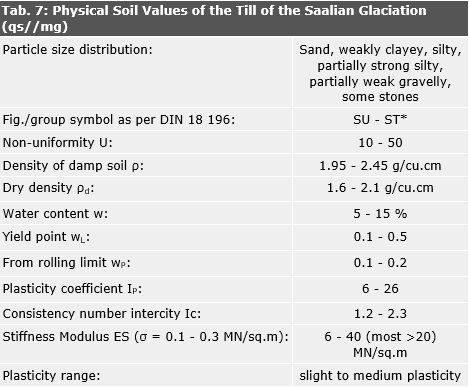 Tab. 7: Physical soil values of the till of the Saalian Glaciation (qs//Mg)
Image: Umweltatlas Berlin

Tertiary sediments are found only in the neighbourhoods of Hermsdorf and Lübars in Reinickendorf borough. This involves a small-scale deposit in the area of Lake Hermsdorf, where marine rupelium from the lower oligocene is found near the surface.

Because of its clay and silt content, rupelium is a cohesive sediment with very low water-conductive capacity (aquitard). 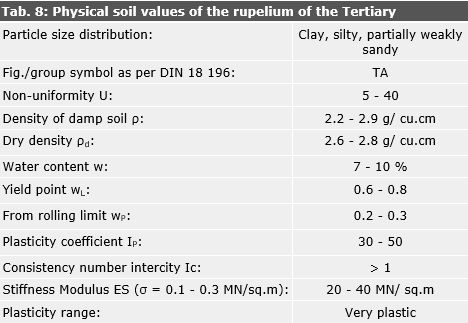 Tab. 8: Physical soil values of the rupelium of the Tertiary
Image: Umweltatlas Berlin

The anthropogenic deposits belonging to the latest Holocene deposits are shown only when their thickness exceeds five meters. This is usually construction rubble mixed with varying proportions of sand, gravel or till. The deposits may have been dumped over a large area, or in the form of rubble hills.

Also, in the area of the historical centre of Berlin, former watercourses and ditches and those filled in more recently, as well as those of the city fortification systems (moats, etc.), are shown by cross-hatching.

Single buildings with a foundation depth of more than 10 m are drawn in and numbered only in the central area of the city, on Maps 423 C and 423 D. This representation is not complete, and corresponds to the state of knowledge at the time of the preparation of these particular maps of 1993. More detailed information on deep foundations are shown on Table 9. 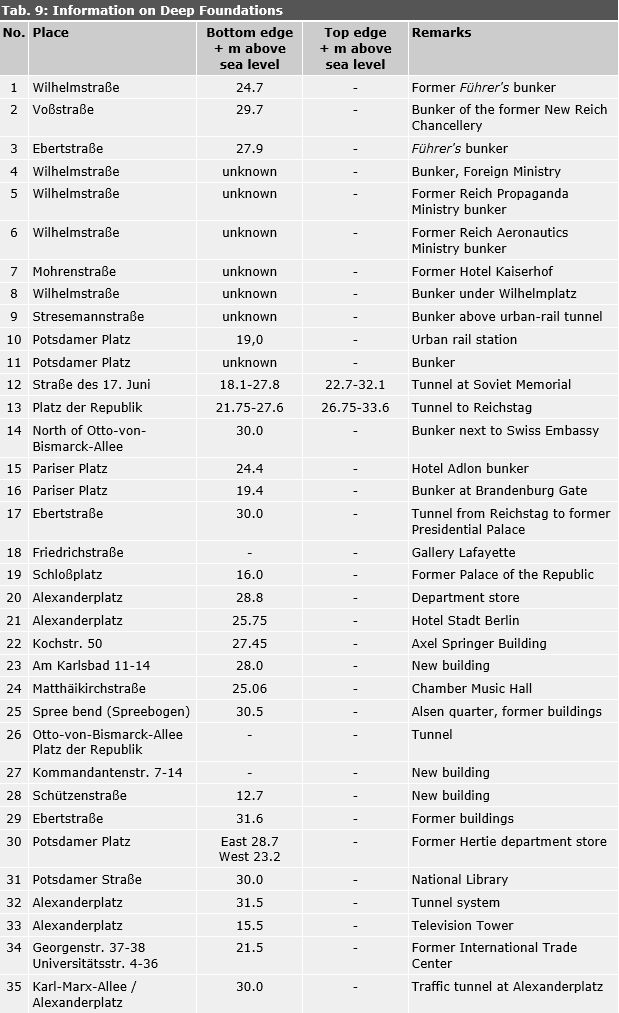 The bore holes used for the map are shown with different point markings, according to their depths. The documented density and depth of the bore-hole points serves to estimate the precision of the information on the areas shown on the Engineer’s Geological Map.

The glacial-spillway sands form a thick aquifer (main aquifer) within the overall freshwater system, in which several separate aquifers are hydraulically connected. The groundwater in the sands is present in an unconfined condition (cf. Maps 02.07 and 02.12).

It should be considered that the groundwater levels are in some cases strongly affected in the vicinity of the waterworks wells by the withdrawal of water by the Berlin Waterworks for the city’s water supply.

The aquifer in the glacial spillway is uncovered; it is not protected against pollutants penetrating over broad areas.

The velocity of flow can be assumed to be ≤ 0.25 m/d. Near well facilities, it can be considerably higher.

In the area of the plateaus, the main aquifer is in most places covered by thick Saalian and Weichselian Glaciation till. Generally, confined groundwater conditions can be assumed here, with depths to groundwater of usually more than 10 m. Towards the Glacial Spillway, the depth to groundwater becomes less, in accordance with the diminishing thickness of the till. 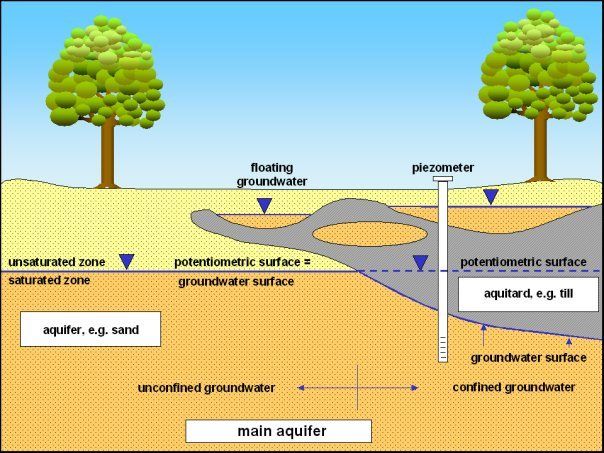 In small channel and basin-like depression in the Saalian and Weichselian Glaciation till, in which meltwater sands and also drainage products of the debris loam or till occur, there is often an upper aquifer of low thickness. Here, near-surface groundwater must be assumed, depending on the precipitation level. This is also described as so-called "floating groundwater" (Fig. 1). In addition, it cannot be ruled out that such "floating groundwater" will occur in sandy islands within the till.

These conditions have to be taken into account in subsurface construction work and in the construction of buildings with cellars.

An unconfined, uncovered, independent aquifer separated from the confined main aquifer by the ground moraine in between, has developed in the sands of glacial valleys of the Panke Valley on the Barnim Plateau (Fig. 2). 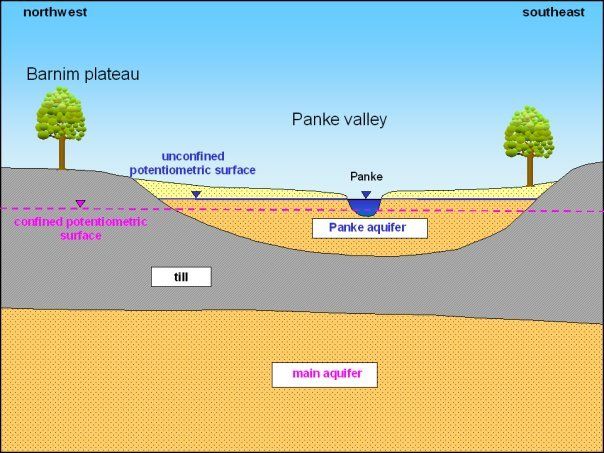 Additional information on groundwater can be obtained from the Senate Department for the Environment, Transport and Climate Protection, Working Group II B 3 Geological Survey in the internet [in German].