During the recording period of 1993-2002, 34 species of fish were verified in the state of Berlin, including six non-local species. Compared with 1993, the species inventory was expanded by one non-indigenous fish species, the marble carp, a cyprinide originating in China, which was stocked, particularly during the 1980s, for economic reasons. Moreover, a second bullhead species has now been verified in Berlin, the black bullhead (Ameiurus melas). This species was already described by Doering & Ludwig (1992) for the bodies of water in the Great Tiergarten; however, it could not be taken into account in the current map representation either, since the living catch reports do not distinguish between the two species, so that their occurrences cannot be delimited clearly from one another (Wolter et al. 2003).

Since 1993, order has brought to the taxonomic chaos previously prevailing in the systematics of European freshwater fish, particularly due to the basic work of Kottelat (1997). As a result, the scientific species names of several fish species have been changed, by comparison with the last edition of the map. Besides this editorial change, the view of a species as not local (non-indigenous, neozoans) has been fundamentally changed. As the result of an international working group on Neozoans/ Neophytes, the year 1492, the official discovery of the "New World" by Columbus, has been established as the threshold year for the determination of a species as non-indigenous, since after this, the exchange processes of goods, commodities and also biota increased immensely between the continents. Species of fish naturalized after 1492 are regarded as non-indigenous, not local (Kinzelbach 1996, Kowarik 2003).

In glaring contradiction to this, the new Berlin State Fishing Regulation (LFischO, GVbl Berlin 57, No. 54 of December 22nd 2001) has, for purposes of simplification of economic stocking measures of the fish industry (abolition of approval requirements), established all species of fish naturalized since 1900 as local. However, this administrative simplification of stocking regulations is of marginal importance for the ichtheofauna, since the neozoans in terms of the stricter definition which still remain in Berlin waters are economically insignificant and hence, despite unrestricted stocking possibilities, in permanent decline (cf. Tab. 1 ).

The species carp and gibel carp, which are economically significant in Berlin, particularly for fishermen, are no longer viewed as non-indigenous, as they were in the edition 1993, since they demonstrably settled the Elbe watershed area, including the Havel and Spree, between 530 and 1100 (Hoffmann 1994). 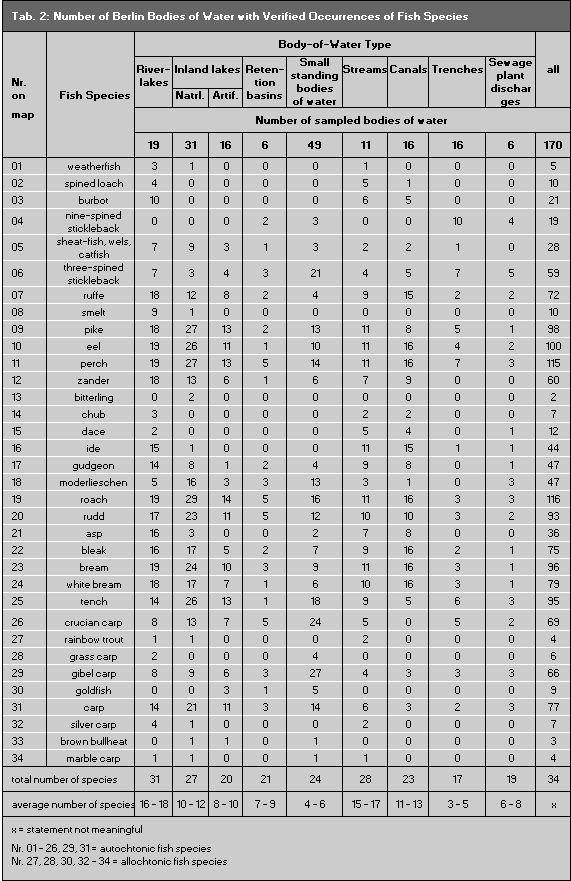 The most frequent species of fish in Berlin bodies of water are still the roach and the perch, followed closely by eel, pike, bream, tench and rudd, which are all on the increase (Tab. 1).

The most dramatic population decline affected the crucian, with 16 eliminations within the last ten years, for which reason this species is classified as severely endangered in the current Red Data Book.
The bitterling, a so-called "Habitat-Directive species," the preservation of which requires special attention, lost 80 % of the occurrences which had existed in 1993. Today, only two reproductive populations exists (Wolter et al. 2003).

The decline in occurrences of the neozoans rainbow trout and grass and silver carp was comparably dramatic, albeit from a conservationist viewpoint, not undesirable. These species cannot reproduce naturally in Berlin waters, and due to the above-mentioned lack of economic significance, or in the case of the rainbow trout, to a lack of suitable bodies of water, are no longer being stocked.

Another Habitat-Directive species, the loach, showed a strong increase in Berlin. The positive development of the populations of other typical species of river fish, such as the ide and the asp, has proceeded analogously.

Since Berlin’s bodies of water have hardly changed at all structurally – the degradation of the Spree has even increased in the government district construction area – the increase in river fish species can only be explained by an improvement in water quality. One reflection of this is the relatively high number of species moved to less-threatened categories in the Red Data Book, and also that the "mass fish problem," widely discussed in 1993, is now a thing of the past. Today, the so-called white fish show good to very good individual growth.

Here the use of phosphate-free detergents, the full-scale introduction of phosphate elimination or precipitation in sewage treatment plants, as well as reduced agricultural fertilizer use in the Spree and Havel watershed areas have had a positive effect on the reduction of the nutrient burden in the bodies of water. How considerably the phosphate load has been reduced can e.g. be seen from the fact that the estimation of per capita daily use has been corrected from 4.2 g of phosphorus per day (g P/d) to 1.8 g P/d, as a result of the widespread availability of phosphate-free detergents and efficient phosphate elimination in sewage-treatment plants (Behrendt et al. 1999).

Moreover, the ongoing measures for the reconstruction of the Berlin mixed-water sewage system discharge the bodies of water furthermore. Mixed-water overflows, during which untreated sewage water and polluted rain water during heavy rainfalls flows directly into the bodies of water, may led to fish kills. In the water, bacteria immediately decompose the organic material, consuming oxygen in the process. During heavy rainfall and caused by this, massive mixed-water overflows, the consuming of oxygen is so high that whole sections of waters are free of oxygen. Fish kills are unavoidable. By extensive measures during the last years the mixed-water overflows could already be reduced obvious, therefore situations critical for fish are clearly more unusual compared to the past. The reconstruction measures will last until 2020. Furthermore, the Berlin Senate runs several aerating plants and an aerating ship, which provide artificial input, if oxygen values drop during the summer. The regular supervision of summertime oxygen conditions are carried out by 10 stationary online-measuring probes supplemented by longeron ways during critical weather periods.

In addition to these direct measures for the improvement of water quality and oxygen conditions, the fish also profited from the Berlin reed-bed protection program, the efforts to plant pike-spawning meadows, e.g. in the Tiefwerder meadows, from the certification of spawning protection areas, and the eel and pike stocking measures financed by all licensed fishing people through the sale of fishing tickets.

What is still especially striking is the relatively large number of species in the smaller bodies of water. They are often home to considerably more species of fish than would be expected under natural conditions. The majority of the stocked species is not capable of reproduction under the given conditions of the bodies of water, and is continually restocked. A total of 24 of the species of fish verified in Berlin were found in small bodies of water (see Tab. 2), while the fish fauna characteristic for this body-of-water type contains only eight species: carp, gibel carp, crucian, moderlieschen, rudd, tench and, to a limited degree, pike and perch.

Only rivers, canals, river lakes and inland lakes greater than 10 hectares are relevant for the assessment under the Water Framework Directive. For these body-of-water types, the map provides valuable information about potential species inventory; the good ecological potential must in every case be set above the observed species average (see map legend). However, for an initial classification of the bodies of water through 2006 on the basis of the valuation procedures according to the Water Framework Directive, further stock verification and scientific examinations on the ecological potential of urban bodies of water will be required.