Water Conservation Districts and Groundwater Use 1995

The drinking water needs of Berlin are met primarily by groundwater. The drinking water supply is managed by the Berlin Public Water Companies. Water supplies are partially obtained as bank filtered water: surface waters filter through the soil and are withdrawn by extraction wells near the banks). Some surface water are diverted into groundwater recharge plants to percolate into groundwater, which will then be withdrawn for use. Construction increased considerably after the unification of Berlin in 1990. Groundwater retention is practiced during construction when groundwater is withdrawn. This occurs according to construction activity at various locations and in variable amounts. Especially deep and/or large construction projects use the trough construction method which spares groundwater. This method requires the withdrawal only of small remainders of water.

Drinking water is supplied by 12 waterworks of the Berlin Public Water Companies. Production at the Riemeisterfenn Waterwork was temporarly discontinued in March, 1995. The Berlin Public Water Companies withdraws water from 1,200 groundwater extraction wells. The waterwork wells are safeguarded as water conservation districts to protect water from pollution; certain activities and uses are forbidden in these areas. 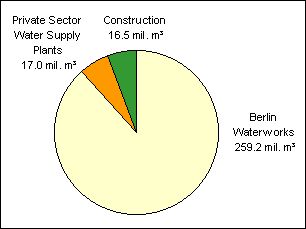 Fig. 2: Groundwater Withdrawal Amounts in Berlin According to Use in 1995 (including Stolpe Waterwork) Statements for groundwater recharge at construction sites refer to the calendar year; statements for raw water extraction refer to the water management year Nov. 1994 to Oct. 1995.
Image: Umweltatlas Berlin 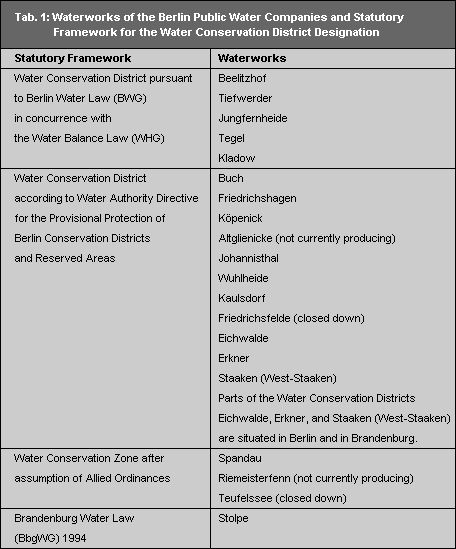 Water conservation districts in the western part of the city are determined by Section 19 of the Water Balance Law (Wasserhaushaltsgesetz – WHG) or Section 22 of the Berlin Water Law (Berliner Wassergesetz -BWG). They are divided into 3 conservation zones with differing protection status; certain actions are forbidden or permissible with limitations. The borders of conservation districts and descriptions of limitations of use are defined in the regulations for each area.

The area size of the conservation zones is measured according to the DVGW Regulatory Rules “Guidelines for Drinking Water Conservation Districts” (DVGW-Regelwerk “Richtlinien für Trinkwasserschutzgebiete”). The areal extent of Zone I is generally at least 10 m surrounding the extraction well. Zone II reaches from the border of Zone I to a line at which groundwater requires 50 days to seep into the extraction well feed area. Zone III comprises the area from the outer border of Zone II and the border of the subterranean water catchment area. If the catchment area is larger than 2 km, a subdivision into Conservation Zone III A and III B is possible. Local hydrogeological conditions must be considered in the determination of conservation districts; a universal pattern may not be applied.

The rigid radius drawn around the extraction well does not take into account the differing hydrological and geological conditions in the catchment areas of the individual water withdrawal sites. The water conservation districts of Tegel and Jungfernheide were redefined on 31 August 1995. Their borders were determined by different criteria, according to the isochronic concept (cf. Fig. 3). The isochronic concept determines the size of water conservation districts and their geometric forms in hydraulic terms: from the flow time of water to the removal site. Lines of identical flow time are called isochrons. The determination of the isochrons, and thus the conservation district borders, proceed from hydrogeologic examinations of a given area. A regional groundwater flow model is developed for this area. The goal of the concept is to have sufficient time for damage control should soil (and/or groundwater) be contaminated. The determination of conservation district borders then follows under consideration of these isochrons, according to DVGW Regulatory Rules. 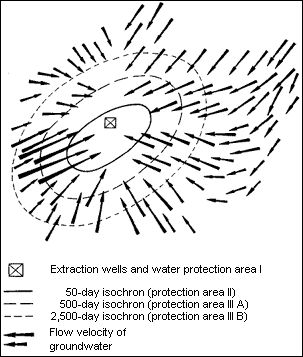 Fig. 3: Example for Definition of a Water Protection Area According to the Isochronic Concept The flow velocity of groundwater is indicated by the length of the arrows. The longer the arrow, the higher the flow velocity.
Image: Umweltatlas Berlin

Use limitations within conservation districts were supplemented and extended in the course of revising the Water Conservation District Regulations according to the isochronic concept.

The GDR determined reserved areas for future water supply production, where no groundwater was withdrawn. Special use limits were in force in these areas, as given in the Water Law of the GDR or in TGL 43271 of September 1984.

The 5 waterworks located in the eastern part of Berlin will be protected until a final new definition of water conservation districts is made according to Federal German law by 1999. This protection takes place under Berlin Water Law by a directive of the Water Authority Directive for the Provisional Protection of Berlin Conservation Districts or Reserved Areas of the Waterworks, dated 11 October 1993, latest revision 27 February 1996. Use restrictions under this directive are similar.

Use Restrictions in Water Conservation Districts

Conservation Zone I prohibits all activities except for those measures required for water supply purposes.

There is also a number of smaller groundwater supply facilities in the private sector, usually for industrial purposes, or commissioned by public facilities. Water is withdrawn and treated in these private sector water supply plants by users themselves. These plants are usually established and run by industrial and commercial operations, but also by public institutions such as hospitals and swimming facilities. The groundwater they withdraw is used as drinking, operating, and cooling water, and to water plants, lawns and meadows. Both the Berlin Public Water Companies, private sector water supply plants require official permits or special approval with specified use considerations and restrictions. These are mandated by the Berlin Water Balance Law or the Berlin Water Law. There are no conservation zones for private sector plants.