The pine (61.8 %) and oak (13.5 %) are the main tree species in the Berlin forests. Of the total area, 5.4 % is planted with birch and 4 % with poplar. These are followed by larch, beech, alder and red oak, with approx. 2 % each. Fig. 2 and Tab. 7, provide an overview of the tree species distribution in the Berlin forests and the differences between the individual forest agencies. 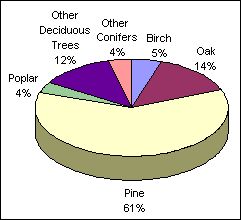 Among the younger stocks up to 40 years of age, the pine prevails (since the afforestation after 1945), but in the older stocks the oak is frequently the main tree species.

Thus, in some areas, the main tree layer consists exclusively of over 80-year-old oaks (cf. Tab. 8). 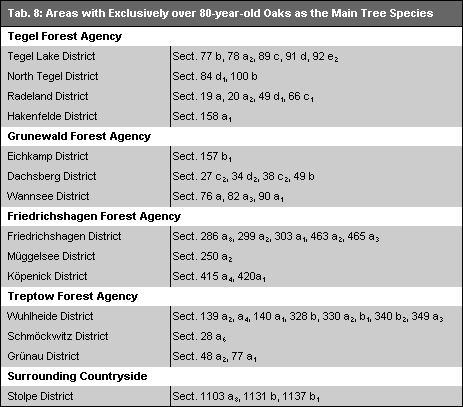 Figure 3 provides an overview of the age-class structure of the Berlin forests. 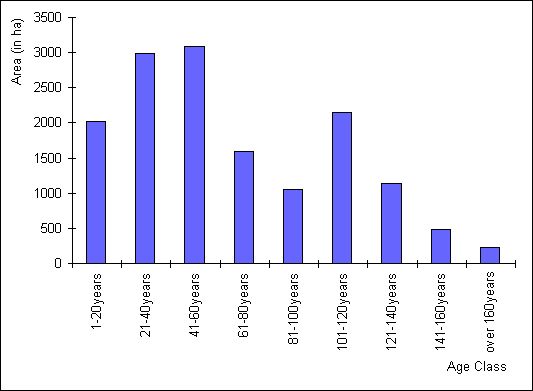 Due to the different development of the forests in the East and in the West of the city, there are also age-class structure divergences. The over 80-year-old tree population prevails in the East. An exception is the Buch Forest Agency. There, due to the extensive afforestation of sewage farms during the past 10 years, three-fourths of the area belongs to the youngest age class. In the West, there are differences between the two forest agencies. In the Grunewald Forest, due to the especially high losses there in the Second World War, only few trees are older than 80 years; as a result of the extensive afforestations after 1945, trees between 40 and 80 years of age predominate. The age-class structure in the Tegel Forest Agency is relatively equalized (cf. Tab. 9). 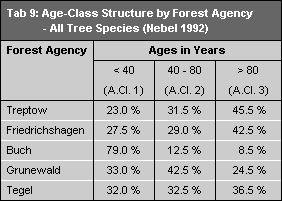 On the present map, only the main tree layer is considered, so that no exact picture of the forest is given. In the undergrowth, deciduous tree species dominate (e.g. oak, durmast oak, beech). In the West of the city, the half the forest areas have a distinct secondary tree layer, while in the East, over 70 % of the forest has no secondary tree layer. Here, there are a number of areas which were afforested under the pine-monoculture system. Today, they consist of large contiguous, pure pine stands, such as in the forestry Districts Fahlenberg (60 % pure pine stands), Müggelheim (36 %), Köpenick (35 %), Schmöckwitz (32 %) and Rahnsdorf (32 %). The pine share is over 80 % in the forest agencies of Treptow and Friedrichshagen, considerably above the level in the West (cf. Tab. 7).

In addition to the pure pine stands, some mixed stands of pine-oak and/or pine-birch can be found in East Berlin, too.

The forest areas in the East of the city, which served essentially for recreation, e.g. the forest belt around the Müggelsee Lake, were frequently stocked as mixed forests, in which the pine did not dominate in the main tree layer. Softwood tree species can be found in the moist areas and hollows of the Friedrichshagen Forest Agency as well as in the shore areas of the Great Müggelsee Lake, the Seddinsee Lake, the Dämeritzsee Lake, the Müggel-Spree and the Gosen Canal. Some 15 % of the forest area of the Fahlenberg District is covered with alder, willow, poplar, etc.

The Treptow Forest Agency manages the last inner-city forest areas in the eastern boroughs. These are the Königsheide Heath, the Plänterwald Forest, the Wuhlheide Heath and the Cöllnish Heath in the Wuhlheide Heath District. Even before reunification, they served primarily for recreation, and have a higher deciduous-tree proportion that the other areas. One of these areas, the Königsheide Heath, is a remainder of the formerly extensive Cöllnish Heath. Here, an abundantly structured mixed forest of pine (54 %) and oak (41 %) has developed. Remainders of natural forest associations have survived. There are valuable old-growth stands with approx. 200-year-old oaks. A further example of a well-structured deciduous mixed forest is the Plänterwald Forest. Owing to a long period of extensive economic use (or none at all), and a good water supply, a forest profile rare for Berlin has developed here. In large parts, there is a near-natural character. There are oak-beech and oak-hornbeam forest stands. The prevailing tree species, with 54 %, is the oak, followed by the beech with 17 % and the hornbeam with 11 %. Also remarkable is the high age of the tree population: over 83 % of the trees are older than 90. In the other districts of the Treptow Forest Agency, pines dominate. In the Grünau Forestry District, approx. 26 % of the area is covered by pure stands of older pines (A.Cl. 2 and 3). In boggy, moist channels like the Krumme Lake at Grünau (e.g. Sect. 44 a, 49 a1, 49 a2) and at the Plumpengraben (e.g. Sect. 62 a1, 572 a1) alder-swamp forests grow. In the Schmöckwitz District; there are likewise extensive pure stands of pine. In approx. 20 % of the pine stands, florally foreign tree species are present, frequently red oak and durmast oak grow in the secondary tree layer.

The Tegel Forest Agency has a high proportion of contiguous pine and pine-oak forest stands. Following pine (56 %) and oak (22 %), the florally-foreign larch is the third most common tree species here, with 5 % (cf. Tab. 7). The proportion of pure stands of pine is around 10 %, and thus clearly below that in the East. The North Tegel District consists of 60 % pine-oak-forest stands and 25 % mixed oak forest. Other tree species are hardly present at all. At Hubertus Lake in Frohnau, residual alder-swamp forests can be found (Sect. 112 d2). In Tegel Lake District, there are, in addition to 50 % pine-oak-forest and 25 % mixed oak forest, also 15 % mixed beech forest (i.e. Sect. 72 a, 91 c2, 91 e). Here, remainders of the natural oaks-beech forest are also found (e.g. parts of sections 75, 76). The Spandau Forest (Radeland and Hakenfelde Districts) and the Gatow District (aside from the Jungfern Heath) have a relatively high proportion (up to 20 %) of florally-foreign tree species (red oak, Douglas fir). In the Jungfern Heath, in area the of the Airport Lake, typical oak-birch forests exist (e.g. Sect. 48 a). On Pichelswerder in Hakenfelde District, near-natural oak-hornbeam forest stands still grow (Sect. 159 b).

In the Grunewald Forest Agency the pine is likewise the most frequent tree species, with a proportion of approx. 52 %. After that come oak (22 %), birch (10 %) and red oak (5 %). The Grunewald Forest is covered by pine and mixed pine-oak forests on approx. 50 % of its area. Well structured mixed-forest areas have developed. The proportion of florally foreign tree species is especially high in the Dachsberg and Eichkamp Districts. However, there are also many contiguous mixed-oak forest areas, for instance at the Schlachtensee Lake. The Nikolassee District has a relatively high proportion of birch: 30 % of its area is covered with birch and birch-oak forest (i.e. sections 94, 95, 96). The Dreilinden District consists of 70 % pine and pine-oak forest and 30 % of deciduous mixed forest (mostly in its eastern area). The Wannsee District consists of 60 % pine and pine-birch forest stands, 20 % well-structured oak mixed-forest stands, 10 % birch-mixed forest and 10 % other deciduous mixed forest. On the slopes of the Griebnitz Lake and the Havel with northern exposure, remainders of the natural durmast oak-beech forest can still be found.

The Buch Forest Agency occupies a special position within the Berlin Forests system. It consists of 52 % open cultivated land (predominantly ruderal semi-dry meadows), 32 % wooded structures, 14 % forest and 2 % standing bodies of water. A particularity are the afforested sewage farms with an area of approx. 1,370 ha, of which 770 ha are in the northeast of Berlin and 600 ha in Brandenburg. The landscape of these reafforestation areas is today marked by incomplete stands of various deciduous tree species and some pine areas. More or less contiguous stands of predominantly site foreign and florally foreign tree species (pioneer forest structures) have developed on only 40 % of the area. The main tree species, with a proportion of 35 %, is the poplar (408 ha). That explains the high share of poplar in Berlin as a whole (cf. Fig. 2), since it is represented in the other forest agencies to a far lesser degree. During the afforestation, different species were used (e. g., the black poplar, aspen, balsam poplar, gray poplar, Canadian poplar). Otherwise, box alders (10 %) and willows (6 %) characterize the stands. Pines grow on 4 % of the area.

The development of this area to a forest-dominated recreational landscape is of great significance, considering the uneven distribution the of recreational forest areas in the city. While in the west of the city, the wooded areas are distributed rather evenly and extend far into the urban area, 90 % of the forests located in the east of the city are in the south-east, where, however, only a small part of the population lives. In the central area of East Berlin, there are almost no wooded areas. The Northeast is likewise a forest-poor area. Moreover, there is a growing need for recreational forest in this area due to the extensive residential construction and commercial location planned here. Since 1991, a project for the rehabilitation and reformation of the former sewage farms has being carried out as part of the “Ecological Reconstruction Program” (ÖSP), under the sponsorship of the Berlin Forests, from which rehabilitation concepts for polluted sites have been derived. The goal is a recreational forest landscape, with the old Buch Forest as the centerpiece, and a varied landscape, consisting of mixed forests with site and florally appropriate tree species, bodies of water and open spaces on the former sewage farm areas. In addition, the existing forest structures are to be planted with undergrowths of oak, maple, pine, linden, birch, alder, ash and aspen in coming years.

The Buch Forest is one of the most valuable forest areas in Berlin. There, there are near-natural forest lands such as remainders of the beech and durmast-oak forest (e.g., Section 504) and the lathraea and English oak-hornbeam stands (e.g., Section 506). The Buch Forest is a alder-rich forest; alder-swamp forests grow in the land-forming portions of the Bogensee chain of lakes and alder-ash stocks in wet hollows (Section 507). The alder is the second-most frequent main tree species, after the pine (40 %); it is followed by the oak (13 %), the birch (8 %) and the beech (6 %).

In comparison with the Environmental Atlas 1985, it is to be observed that there is a larger proportion of areas in which the main tree species has changed. The main reason for this lies in the change of the legend. This is most evident in the case of the red oak stands, which were counted in the Environmental Atlas 1985 as part of the oak stands.

The sections with red oak stands as the main tree species are no longer marked yellow on the present map, but rather violet (florally foreign deciduous tree species). The changes resulting in the Grunewald and Tegel Forest Agencies can be seen in Tab. 10. 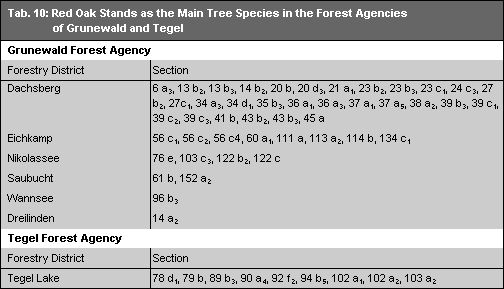 Tab. 10: Red Oak Stands as the Main Tree Species in the Forest Agencies of Grunewald and Tegel
Image: Umweltatlas Berlin

Of the restituted Berlin forest areas in the surrounding countryside (Map 05.04.4), pine and oak are likewise the species which characterize the stands. There are extensive contiguous pine monoculture systems. Thus, in the Gorin forestry district, pure stands of pine predominate. Only the areas around Gorin Lake are covered with birch, soft deciduous tree species and florally foreign evergreens. In the “Young Oaks” and “Old Oaks” areas, mixed-oak and florally foreign evergreen species can be found. In the Berlin city forest areas in the state of Brandenburg, tree species such as oak and birch, but also red oak were frequently planted in near-residential areas.