Calculation of the percolation water rates on an annual and monthly basis, and forecast changes due to climate change

Water balance data calculated with the ABIMO model provide a 30 year long-term average value. However, in reality, the values fluctuate considerably on an annual basis, depending on the precipitation levels, and are also subject to fluctuations over the course of a year. In the present research project, percolation water rates were calculated with a considerably higher temporal resolution.

Theresults presented below were developed in the context of the Inka BB research project of the German Federal Ministry for Education and Research (Subsidy Code 01LR0803C), Subproject 23. Inka BB is the acronym for the Berlin-Brandenburg Climate Adaptation Innovation Network (www.inka-bb.de/). In this research project, which was broken down into 24 subprojects, Subproject 23 addressed technologies for climate adapted water management in urban areas in the context of climate change. For this purpose, the climate scenarios developed by the project partner Potsdam Institute for Climate Impact Research (PIK) were incorporated into the various models in order to make statements on issues relevant for water management.

The input data adopted comprised the land-use categories (cf. Maps 06.01 and 06.02, as of 2008), the classified degree of impervious coverage (cf. Map 01.02, as of 2007), the classified depth to groundwater (cf. Map 02.07, as of 2010), and such soil parameters as usable field capacity and Kf values from the data base of the Berlin Environmental Atlas (cf. Map 01.06, as of 2009b), for approx. 25,000 polygons. Additional soil parameters, such as porosity, were substantiated by reference to the soil associations in the Environmental Atlas (cf. Map 01.01, Map 2009b), using values from the Soil Scientific Mapping Guideline (BGR, 2005). In case of incomplete data sets, plausible assumptions were made, or data was taken from already completed DHI-WASY projects. The result was that 78 different soil types, 156 soil textures, 12 depth-to-groundwater classes and 775 land-use classeswere obtained. 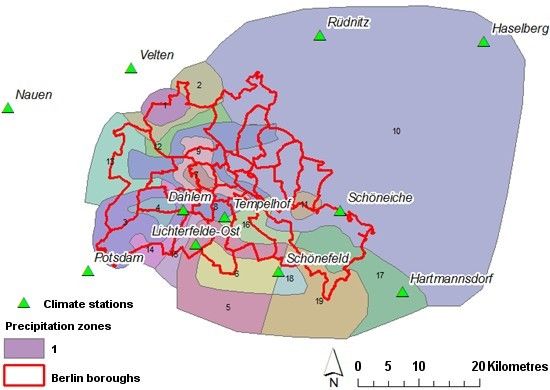 Fig. 5: Distribution of the precipitation zones used in the ArcSIWA
Image: Umweltatlas Berlin

The results presented below are based on an ArcSIWA model designed for the entire area of the state of Berlin, including the boundaries of the intake area of the Tegel waterworks. The ArcSIWA model (Monninkhoff, 2001) is a reduced precipitation-runoff model for a one-dimensional description of runoff formation and of the soil-water balance for quasi-homogeneous area segments, with a temporal resolution of one day. The ArcSIWA accounts for interception, trench storage, infiltration and vertical dampness flow to groundwater, including new formation of groundwater and capillary rise. Thepercolation water rates calculated by the ArcSIWA correspond to the quantity of water exiting vertically from the approx. 2 m thick soil zone. A detailed representation of the ArcSIWA model built is to be presented in Sklorz & Monninkhoff (2013) sometime in 2013.

Figure 6 shows the annual percolation water rates between 1961 and 1990 calculated by means of the ArcSIWA. It shows that the annual values often vary strongly, between 49 and 239 mm/a. The average value for the 30 year period is 142 mm/a, and the median value, 156 mm/a. A significant trend, e.g. due to climate, cannot be ascertained during this time period. The results are generally quite comparable with the long-term average of the percolation water rate (160 mm/a) from the ABIMO model (SenStadt, 2009c). By contrast with the values in Table 4, the stated values were ascertained by incorporating bodies of water into the average at a percolation water rate of zero. Spatial differences in the model results were particularly evident in the central part of the city, where the ArcSIWA calculated significantly lower percolation water rates. This difference is essentially due to the different approaches for impervious coverage upon which the two models are based. 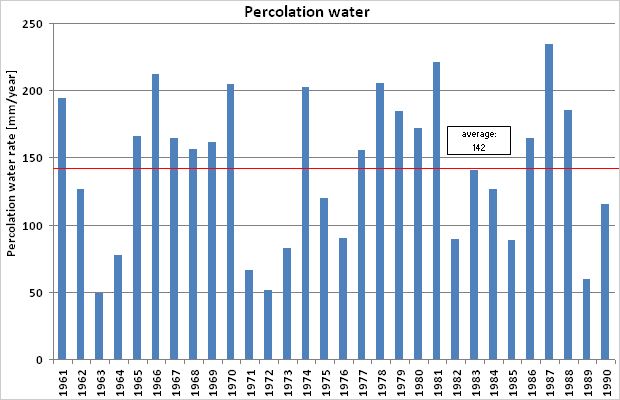 Fig. 6: Annual values of percolation water rates in Berlin for the period 1961 to 1990
Image: Umweltatlas Berlin 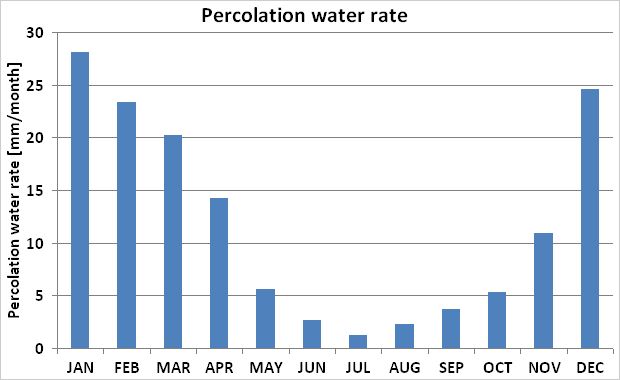 The period 1961 – 1990 was used for the model calibration of the INKA BB research project, Subproject 23. Subsequently, changes of percolation water and groundwater new formation were calculated with the model based on the climate scenarios developed by the PIK. A comparison was then undertaken between the T-0 scenario (the reference scenario assuming no climate change) and the T-2 scenario (assuming a temperature increase of 2°C). The calculations show a clear reduction of groundwater new formation for the future, attributable to climate change (DHI, 2012).