Soil is the topmost layer of the crust of the earth formed on the surface by weathering and the influence of all other environmental factors. The mineral and organic substances of soil are pervaded with air, water and life forms. Natural soil originates through the combined interaction of parent material (basis rock), climate, water, relief, flora, and fauna. Depending on the conditions at each location and the developmental periods, different soil types with characteristic profiles and specific physical and chemical properties are formed.

Along with air, water, and sunlight, soil is the basis of life for plants and animals, including humans. Soil is not only a manufacturing base for foodstuffs, feeds, renewable raw materials and a source of raw material itself, but has regarding its multiple functions an outstanding importance in the ecosystem and is an important natural resource.

However, soil is translocated, altered, made impervious and destroyed by human activities (e.g. in agriculture or by construction of buildings).
Thus, soil represents a limited and non-renewable resource that must be protected and dealt with responsibly. 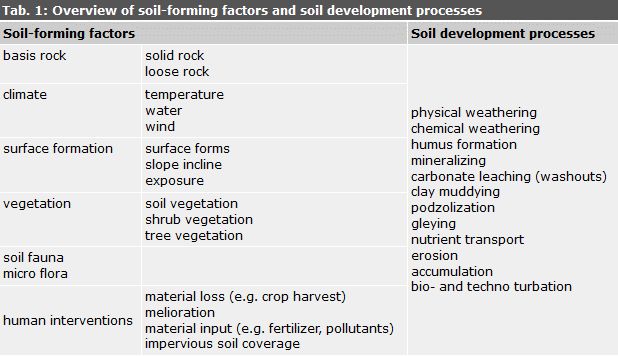 Soil is formed from basis rock; it is a mixture of 3 components and 3 phases of solid, fluid, and gaseous constituents:

Soils are systematized in divisions, major soil groups, soil types, soil units, and soil forms. (Translator’s note: Soil systems vary across countries and languages. This translation is based on the FAO/UNESCO system as much as is possible. The terms in parenthesis are common terms to assist non-specialist readers.)

Tab. 2 demonstrates the classification at the example of the division of terrestrial soils and the major soil group of cambisols (brown soils) in particular. A detailed description of the soil classification can be found in the German Bodenkundliche Kartieranleitung (1982, 1994 and 2005).

Soil types are considered stages of soil development often encountered under certain environmental conditions. They unify soils with the same or similar profile structures (horizon layers), due to similar processes of material transformations and translocations.

The mineral topsoil A horizon is characterized by the accumulation of organic substances and/or a loss of mineral substance; washouts of clay, humic materials, iron oxides and aluminum oxides. Material-specific accumulation and translocation processes enable further divisions of the A horizon. This differentiation in horizon terminology is indicated by a trailing lower-case letter; e.g., Ah, h stands for humus; Al, l stands for clay lessivation (washout).

The mineral subsoil B horizon is characterized by the accumulation of materials washed out of the topsoil horizon, as well as weathering and transformational processes, e.g., brunification, formation of clay, etc. This produces colours and material compositions different from that of the basis rock. Further differentiation of the B horizon parallels the A horizon, e.g. the v in Bv stands for weathered, brunified, clayey; whereas the t in Bt stands for accumulated clay.

The mineral undersoil C horizon is formed by the relatively unaltered basis rock underneath the soil.

The soil profile of soils characterized by several material translocational or transformational processes thus features several A and/ or B horizons layered on one another.

Anthropogenic alterations of the soil are increasing with progressing use of technologies and the use of ever larger areas.

Nowadays, there are hardly any untouched soils with horizon structures unaltered by humans. Soils are categorized as near-natural where horizon sequences remain largely unchanged in spite of influences by human use such as is the case with forest plantations, predominantly. Soils are categorized as anthrosols (anthric, anthropogenic soils, soils influenced by humans) when the horizon sequence has been destroyed. It has proven extremely challenging to categorize soils into these two groups, due to the difficulty in identifying the exact transition point to anthropogenic influences. The upper 20-30 cm of soils used for agriculture are usually mixed by plowing. Soils used for military training or for cemeteries can retain near-natural soils which can alternate with highly anthropogenic soils within small areas. The degree of anthropogenic influence and/or the degree of destruction is difficult to estimate without appropriate soil studies. The effect use has on the soil is also influenced by whether the whole area was used or not.

A developmental point of view sees soils as relatively “young” or “old”. Soils relatively unaffected by use have a developmental period of up to several thousand years. The primary development of soils in the young moraine area around Berlin occurred in the Holocene period, which began about 12,000 years ago. A favourable climate, and the quick spread of vegetation connected with it, caused a stronger formation of soils. Various soil-forming processes took place during the long developmental period, and these processes are reflected in the formation of typical horizons. The horizon sequences of these soil types are thus much more greatly differentiated than those of “younger” soils.

The quantity of soil as a natural resource is endangered by the progressive impervious coverage of soils. Industrial, commercial, traffic, and residential uses of soil are increasing more and more. Pervious soils once used agriculturally are found at the edge of the city; these soils have largely near-natural properties. Building construction caused soils to be translocated, mixed, made impervious over extensive areas and destroyed.

The quality of soils is altered by pollutants. Soils are permanently damaged by pollutant inputs from unregulated waste disposal, accidents, spills and leakages, improperly conducted storage depots, as well as emissions from industry, commerce, and traffic.

Soil can only store and filter a certain amount of pollutants. If soil storage and filter capacities are exceeded, pollutants can pass through soils and enter the groundwater.

These “area use” problems are more intense in metropolitan areas like Berlin based on e.g. the quantitative problem of impervious coverage, and the qualitative problem of material loads on soils from old contaminated sites and other pollutant inputs.

The discussion and considerations on soil protection at federal and state government levels in West Germany first really got underway at the beginning of the 1980s. Soil protection was first anchored in law in the Federal Soil Protection Act of 1998. This law was supplemented by a Berlin law in 2004.

The goal of the Berlin Soil Protection Act is “to protect the soil as the basis of life for humans, animals, and plants; to avert damaging alterations and to take precautions against the origin of new ones”. Long-term effects to soil are to be avoided, and the natural functions of soil are to be protected.

A prerequisite for effective soil protection is knowledge about the spatial condition of soils, as well as impairments in their quantity and quality. In some cases, information on soil use, degree of impervious coverage and material load has been compiled in Berlin for decades. This information forms the basis for assessing the anthropogenic load on soils. A cadastre of impacts on soil was developed, and a Map of Degrees of Impervious Coverage, and a Map of Use were prepared.

To plan soil protection measures and to consider soil protection concerns at individual planning levels, it is necessary to determine soil value, suitability, and sensitivity. Complete data about distribution of soils and their ecological characteristics must be available. The Map of Soils may be used to derive ecological parameters in order to assess soil properties and functions.