On October 23, 2007, Directive 2007/60/EC of the European Parliament and the Council on the assessment and management of flood risks (FRMD) was passed; it came into force on November 26, 2007. The 1st cycle to implement the FRMD was completed with the publication of the Flood Risk Management Plan (FRM Plan 2015) at the end of 2015. The 2nd cycle is to be implemented by 2021. Its first phase involved reviewing the flood risk assessment and the risk areas in Berlin in accordance with Section 73 of the Federal Water Act (WHG). This phase was completed by the publication on December 22, 2018 (SenUVK 2018). The second phase to implement the FRMD involves preparing flood hazard maps and flood risk maps. These form the basis for the subsequent update to the Flood Risk Management Plan to be completed by the end of 2021.

Pursuant to Article 74(1) of the Federal Water Act, the relevant authority of the State of Berlin prepares the flood hazard maps and the flood risk maps. According to Article 74(2) to (4) WHG, the contents of the maps must comply with the requirements of Article 6(5) FRMD. In order to produce maps that are largely uniform in terms of content and design, the German Working Group on Water Issues of the Federal States and the Federal Government (LAWA) has published “Recommendations for the establishment of flood hazard maps and flood risk maps” (LAWA 2018) for this purpose. They contain standardised minimum requirements defined in the FRMD applicable both to flood hazard and flood risk maps.

Flood hazard maps show flood extent and the water depth for different flood scenarios. The hazard maps illustrates flooding caused by high water levels of a body of water itself. Floods that are caused by sewage plants exceeding their capacity or groundwater surfacing, failure of dams installed for water-management purposes or heavy rainfall are not included in flood hazard maps. Flood risk maps indicate potential adverse consequences associated with floods with reference to the protected assets defined in the European FRMD (LAWA 2018).

In Berlin, flood hazard maps and flood risk maps are reviewed and, if necessary, updated based on the LAWA recommendations for the establishment of maps and criteria of significance (LAWA 2017, 2018) as well as the implementation concept of the River Basin Community Elbe (RBC) (FGG 2018). For a more detailed description of the methodological design and the steps involved, please refer to these two documents (LAWA 2018, FGG 2018). This was accompanied by a close bilateral collaboration between the State of Berlin and that of Brandenburg, as they share a state border. The flood risk assessment in accordance with Directive 2007/60/EC of the European Parliament and of the Council on the assessment and management of flood risks (FRMD) revealed that there is a potential significant risk of flooding in the following areas: Tegeler Fließ, Panke, Erpe, Lower Havel / Lower Spree and Müggelspree, including the Gosener Gewässer with the Seddinsee. These were therefore defined as risk areas in accordance with Section 73 WHG (see Figure 1). For these areas, flood hazard maps and flood risk maps were developed or updated by December 22, 2019.

The flood hazard maps and flood risk maps constitute a preventive tool for flood protection in Berlin that outlines the extent of flooding and its effects during specific flood events. 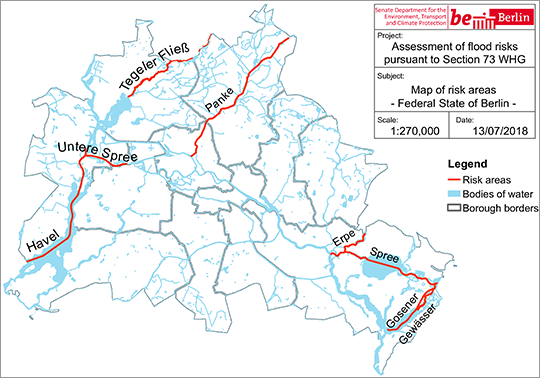