During the recording period of 2003-2013, 38 species of fish were verified in the state of Berlin, including nine non-local species. Compared with 2003, the species inventory was expanded by five more species, of which four are neozoans (foreign species). These include the brook trout, the stone moroko, the pumpkinseed and the gold orfe. Moreover, the native stone loach, a species which had disappeared from the territory of the state of Berlin since 1920, was attested again for the first time in 2010 in the Berlin segment of the Neuenhagen Millstream (Erpe).

On the other hand, one non-indigenous species, the rainbow trout, can no longer be ascertained.

As in the 2004 edition, the systematics of European freshwater fish by Kottelat (1997) has been used here. Also used in the definition of non-indigenous species. As a result, the scientific species names of several fish species have been changed, by comparison with the last edition of the map. Besides this editorial change, the view of a species as not local (non-indigenous, neozoans) has been fundamentally changed. As the result of an international working group on Neozoans/ Neophytes, the year 1492, the official discovery of the "New World" by Columbus, has been established as the threshold year for the determination of a species as non-indigenous, since after this, the exchange processes of goods, commodities and also biota increased immensely between the continents. Species of fish naturalized after 1492 are regarded as non-indigenous, not local (Kinzelbach 1996, Kowarik 2003).

In contradiction to this, the Berlin State Fishing Regulation (LFischO Berlin) has, for purposes of simplification of economic stocking measures of the fish industry (abolition of approval requirements), established all species of fish naturalized since 1900 as native. With reference to finish stocking regulations, stocking of native fish species is legally subject to notification, and for non-native and nonindigenous species, authorization is required from the Subordinate Fishing Authority.
The species carp and gibel carp, which are economically significant in Berlin, particularly for fishermen, are no longer viewed as non-indigenous, as they were in the 1993 Edition, since they demonstrably settled the Elbe watershed area, including the Havel and Spree, between 530 and 1100 (Hoffmann 1994). 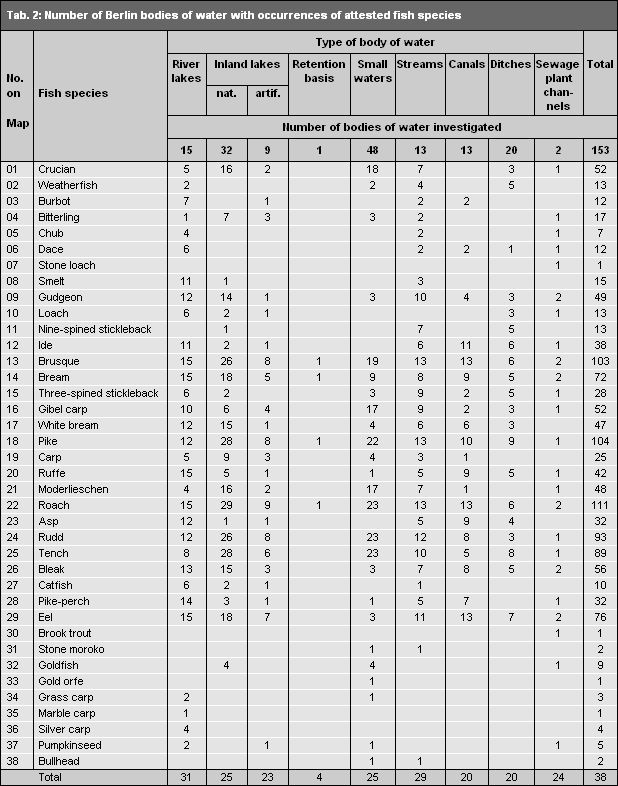 The most frequent species of fish in Berlin bodies of water are still the roach, brusque and, for the first time in 2013, also the pike. These three species are followed closely by eel, bream, tench and rudd, all of which show different development tendencies (Tab. 1).

The current Red Data Book of fish and cyclostomata in Berlin shows a positive development tendencies compared with the Red Data Book of 2005. A total of eleven species were assigned a lower threat level, i.e., their populations have developed positively, and twenty-three species have remained unchanged. For not one single species has the categorization, and hence the assessment of threat level, become worse (cf. Tab. 1, SenStadtUm 2013a).

The most dramatic population decline involved the crucian, with 16 eliminated occurrences over the past ten years, for which reason this species is still classified as endangered in the current Red Data Book. Under the most recent amendment to the Berlin State Fisheries Regulation (LFischO) in 2012, a year-round protection period for the crucian was introduced.

The decline in occurrences of the neozoans the grass carp, marble carp and silver carp was comparably dramatic, albeit from a conservationist viewpoint not undesirable. These species cannot reproduce naturally in Berlin waters, and may no longer be stocked.

Two other Habitat-Directive species, the loach and the weatherfish, also showed a strong increases in Berlin.

Since Berlin’s bodies of water have hardly changed at all structurally – the degradation of the Spree has even increased in the government district construction area – the increase in fish species can particularly be explained by an improvement in water quality. One reflection of this is the relatively high number of species moved to lower-threat categories in the Red Data Book, and also that the "mass fish problem," widely discussed in 1993, is now a thing of the past. Today, the so-called white fish show good to very good individual growth, which is particularly also due to good white fish management.
Here, the use of phosphate-free detergents, the full-scale introduction of phosphate elimination or precipitation in sewage treatment plants, as well as reduced agricultural fertilizer use in the Spree and Havel watershed areas have had a positive effect on the reduction of the nutrient burden in the bodies of water. How considerably the phosphate load has been reduced can e.g. be seen from the fact that the estimation of per capita daily use has been corrected from 4.2 g of phosphorus per day (g P/d) to 1.8 g P/d, as a result of the widespread availability of phosphate-free detergents and efficient phosphate elimination in sewage-treatment plants (Behrendt et al. 1999). Moreover, the ongoing measures for the rehabilitation of the Berlin mixed-water sewage system are contributing to further relief for the bodies of water. Mixed-water overflows, during which untreated sewage water and polluted rain water during heavy rainfalls flow directly into the bodies of water, may lead to fish kills. In the water, bacteria immediately decompose the organic material, consuming oxygen in the process. During heavy rainfall and the accompanying massive mixed-water overflows, the consumption of oxygen is so high that whole sections of waters are free of oxygen. Fish kills are unavoidable. Due to extensive measures during recent years, the mixed-water overflows have already been reduced considerably, so that situations critical for fish are significantly less common than has been the case in the past. The rehabilitation measures will last through 2020. Moreover, the Berlin Senate operates an aerating ship, which provide artificial input of oxygen if the values drop during the summer. The regular monitoring of summertime oxygen conditions are carried out by stationary online-measuring probes supplemented by longitudinal profile cruises during critical weather periods.

In addition to these direct measures for the improvement of water quality and oxygen conditions, the fish have also profited from the Berlin reed-bed protection programme, the efforts to plant and service pike-spawning meadows, e.g. in the Tiefwerder meadows, and the carp, tench and pike stocking measures financed by all licensed fishing people through the sale of fishing tickets. In addition restocking with the European eel are carried out within the framework of an EU-funded project.