Ascertainment of the Number of Storeys in Buildings

For buildings for which the number of storeys has not been entered, an estimated value was used to calculate the floor space index: 2 for ruins, and 8 for towers.

Ascertainment of the Land to Building Ratio

The land to building ratio (LBR) states the built-up proportion of a lot. The LBR is a decimal number with one or two fractional digits. Thus, the formula for the calculation of the LBR for the preparation of the present map is derived as follows: The sum of all built-up areas on a lot – here, the block area – is divided by the total area.

Ascertainment of the Floor Space Index

The floor space index (FSI) states the number of square metres of floor area per square metre of lot area, compiled at the level of the total block area.
For the ascertainment of the FSI, the following applies:
The sum of all floor spaces of the buildings or building parts located on a block area is divided by the block size. The floor area of a building is thus calculated from the sum of the area of all full floors. Generally, this means: number of full floors multiplied by the base area of the building.

Consideration of Structural Facilities as per § 19, Sec. 4 BauNVO in the Ascertainment of LBR

According to § 19, Sec. 4 BauNVO, garages and carports, including their driveways and ancillary and structural facilities, have to be counted in the ascertainment of the base area.

As a first step, the so-called “main facilities” as per § 19, Sec. 2 BauNVO, were ascertained. In the second step, the base areas of garages, carports, underground car parks and ancillary structures listed in the ALK were added. The buildings of the types shown in Table 1 were categorized as ancillary structures if they had less than two storeys. These facilites do not affect the ascertainment of the FSI.

For the values of the land to building ratio (LBR) represented in the map, only the main systems as per § 19, Sec. 2 BauNVO were ascertained, hence without the ancillary structures, parking spaces etc. The values with ancillary structures, parking spaces etc. (§ 19, Sec. 4 BauNVO) are not shown on the map; however, they too were ascertained, and can be seen in the factual data display. 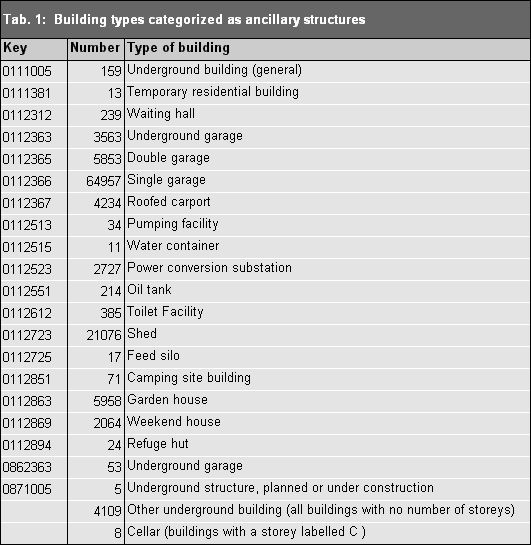 Slightly divergent values of urban structural density per block emerge, depending on whether the orientation is towards Sec. 2 or Sec. 4 of §19 BauNVO. Figure 1 shows the distribution amongst the chosen LBR density classes for the two methods of computation. 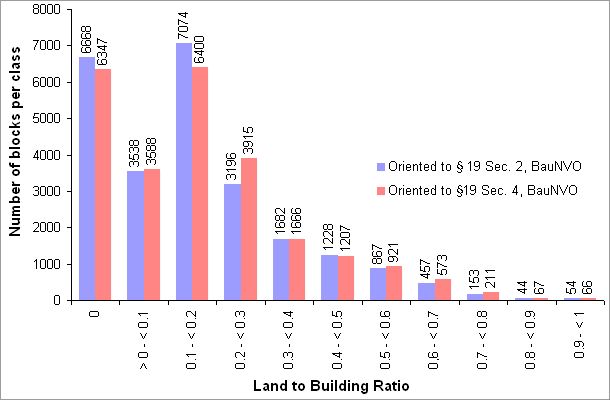 Fig. 1: Comparison of land to building ratio (LBR) depending on orientation towards § 19, Sec. 2 of BauNVO or § 19 Sec. 4 of BauNVO
Image: Umweltatlas Berlin

Hereinafter, LBR always refers to an LBR based on § 19 Sec. 2 BauNVO.

Overall however, it turns out that these differing considerations of ancillary structures have only a slight effect on the results of the presentation of the LBR.