For West Berlin, the data from the 1990 Forsteinrichtung (Forest Establishment) were evaluated. The Forsteinrichtung is conducted at ten-year intervals as the basis for the Management Plan; however, no projections are made for the interim years. The data is stored at the State Forestry Agency.

The data for the East Berlin forest and the city forest areas in the state of Brandenburg were taken from the data base of the Forest Fund (DSWF) in the Forest Planning Facility in Potsdam. This data base was maintained centrally for all forestry-run areas in the former East Germany, and contains extensive data on the condition and for the planned management of the areas. The data on conditions were collected every ten years, and projected annually for the interim years with the help of a growth model. The data evaluated for the map show the 1991 status on the basis of the 1990 survey.

Despite different data bases, the data prepared for the illustration of the wooded areas are comparable for both sections of the city, since similar parameters were used for the compilation process. For the presentation shown in the Map, the features listed in Table 2 were evaluated. 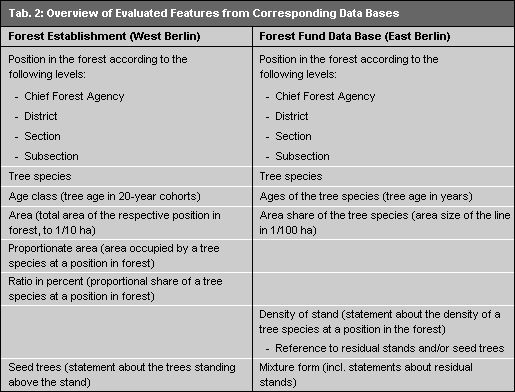 The ratio of tree species (in %) at a given position in the East Berlin forests could not be taken directly from the statistical base, but had to be calculated separately.