For the ascertainment of depths to groundwater, a model of the altitude of the free potentiometric surface level above sea-level was first calculated for the month of May 2006, from data collected at the groundwater measuring sites. The procedure is described in the text of the Map of Groundwater Levels for May 2006 (cf. Map 02.12).

For areas with confined groundwater, the depth to the water table is defined as the distance between the lower edge of the covering mantle (or the upper edge of the groundwater aquifer) and the surface of the terrain. In these areas, the groundwater-level data of the measurement sites were therefore replaced by the support points which represent the lower surfaces of the covering layers (Fig. 5). A small area in the north of Berlin, where the cohesive rupelium formations are present directly at the earth’s surface (near the Ziegeleisee [“Brickworks Lake”] in the Hermsdorf and Lübars areas,) and hence no usable aquifer is available, was exempted from the calculation, so that no groundwater depths were determined here.

The drafting of the uniform stock of grid data on the potentiometric surface from the basic data described was carried out in the course of several work steps. During processing in 2003, it had become apparent that the uniform regionalization of the entire base of support points, consisting of the groundwater-level measuring points in the unconfined areas and the support points to the subterranean levels in the confined areas, can result in an effect exceeding the limits between various confinement states recognized as significant, which can locally in some cases be very far-reaching. Since however there are also usually major differences between the depth positions of the surface of the groundwater at these limits (the surface is usually considerably deeper on the confined side than on the unconfined side), the uniform regionalization proceedings here yield unsatisfactory results.

For this reason the Kriging procedure was carried out separately in unconfined and confined areas, and the two separate partial grids then brought together. In this way, the hydrogeologically caused differences, or “jumps,” at the groundwater-confinement borders could be better shown. This had a positive effect primarily on the edges of the glacial valley, where it borders the adjacent plateaus to the north and south areas, since the potentiometric surface is no longer “pulled down” in the unconfined areas. 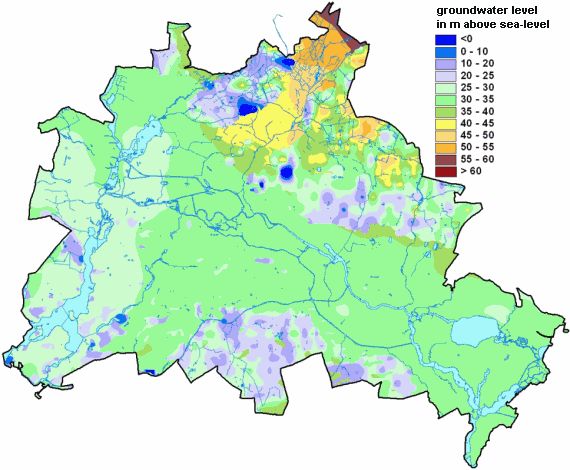 This overview of the potentiometric surface is a synthetic calculation result, and hence an intermediate result. The representation and interpretation of this intermediate result is moreover an important plausibility check for the determination of the depth to the water table, since by the integration with the altitude model incorporates new, independent information into the model. Any uncertainties in this result may then stem from implausibilities in one or the other of the two independent information sources.

The southern part of the Teltow Plateau (Marienfelde, Buckow) is characterized by maximum depths of the potentiometric surface of about 10 meters above sea level. Very deep-lying areas are also recognizable in the area of the plateau sands of the Teltow Plateau east of the Havel; locally they drop roughly to sea level here. This is also the case west of the Havel; mostly however, the potentiometric surface in the confined areas here is between 10 and 25 meters above sea level.

The highest levels of the groundwater are found at altitudes between 55 and 60 meters above sea level in the northeastern, unconfined area of the Panke Valley in Buch, on the Brandenburg state line. The unconfined area of the Panke Valley contrasts sharply with the surrounding confined areas, with altitudes of the potentiometric surface of mostly 40 to 50 meter above sea level. The largest “jump heights” in potentiometric surface are also recognizable at the edges of the Panke valley, locally reaching up to 40 meters in vertical difference over a horizontal distance of only a few hundred meters (e.g. on the eastern edge, at the level of Blankenburg). Thanks to the initially separate calculation of depths to groundwater which were then aggregated, no mutual effect due to the regionalization process – which does not exist in nature – occurred here.

The potentiometric surface reflects the groundwater contour lines in the glacial spillway. It shows a continuous drop of the potentiometric surface in the direction of flow for both the significant tributaries to the main aquifer, the Spree and the Havel, i.e., from east to west and from north to south, respectively. This reflects the hydraulic contact between the surface and the groundwater, which exists everywhere in this area.

Subsequently, a difference model was calculated from the Model of the Upper Surface of Groundwater and the Terrain Elevation Model. The grid width was 100 meters. The depths to groundwater were broken down into seven depth classifications and published as a map of different levels of groundwater. In order to differentiate depths to groundwater in the range of up to 4 meters, especially in areas important for vegetation, an irregular classification was chosen.

For smaller areas, it is possible to obtain more precise results with the digitalized data available, using smaller grid widths to interpolate the data, provided that the density of the Terrain Elevations Model permits this. The classification boundaries between the categories of depths to groundwater can also be chosen arbitrarily, and are also available with discrete information in the calculated data base.