In the past, reduction of industrial and domestic fuel emissions was at the center of air monitoring planning. In these areas sizeable reductions of air borne pollutant emissions could be achieved through broad scale successful redevelopment programs and closures. Enhancements could also be achieved in the area of transportation. Notwithstanding these facts – not only in Berlin – transportation is the largest single source of both current and future air pollutants, and determines the course of action for air monitoring strategies.

Historical development conditions caused the physical layout of Berlin-Brandenburg to be organized in a travel-efficient way. No other region of Germany approaches such favourable conditions. Markedly characteristic of Berlin are the substantial multiple central structures and high utilization of limited space in the inner city, as well as in the centers of the outer city, with intensive large and small scale multiple uses resulting in less suburbanization than in other large cities. Only 20% of the population lives in the surrounding area. However, large sections of the peripheries of the city lay within the administrative borders of Berlin as a result of the implementation of the amalgamated community of “Greater Berlin” in 1920.

Since 1990, the city, with its tight interconnectedness with Brandenburg, has experienced considerable changes to its topography: the dispersion of population, businesses, and new jobs; and the establishment of important locations for shopping and leisure activities, especially evolving in the eastern part of the city and in the neighboring surrounding area. The dynamics of change continues, but at a reduced rate.

The increase in traffic is caused by, among other things: the continuing expansion of the common living and commercial areas of Berlin-Brandenburg; the intensification of international economic interdependence; and, especially in Berlin, the expanded strengthening of the interdependence with Eastern Europe.

The Contribution of Motor Vehicle Traffic to Air Pollutant Concentrations: Origins and Trends

For some years now, in important problem areas, Berlin’s motor vehicle traffic has caused not only substantial noise emissions (see map 07.02, Street Traffic Noise (2005 Edition)), sondern auch der Luftverschmutzung, but air pollution as well, especially since other groups that originally contributed to air pollution have been substantially reduced. Table 1 shows the combined emissions of all of Berlin’s sources of major pollutants since 1989.

Since the fall of the Berlin Wall in 1989, many industrial enterprises have been redeveloped or closed, and the use of coal for fuel for the furnaces to heat Berlin’s residences has been replaced with heating oil, natural gas, or community heating. In 1989 domestic heating and industry were significant sources of sulphur dioxide and fine particulate pollutants, but these have been reduced substantially. As well, between 2000 and 2002 the total emissions of nitrogen oxides have declined almost 25%, while fine particulates have declined over 10%. 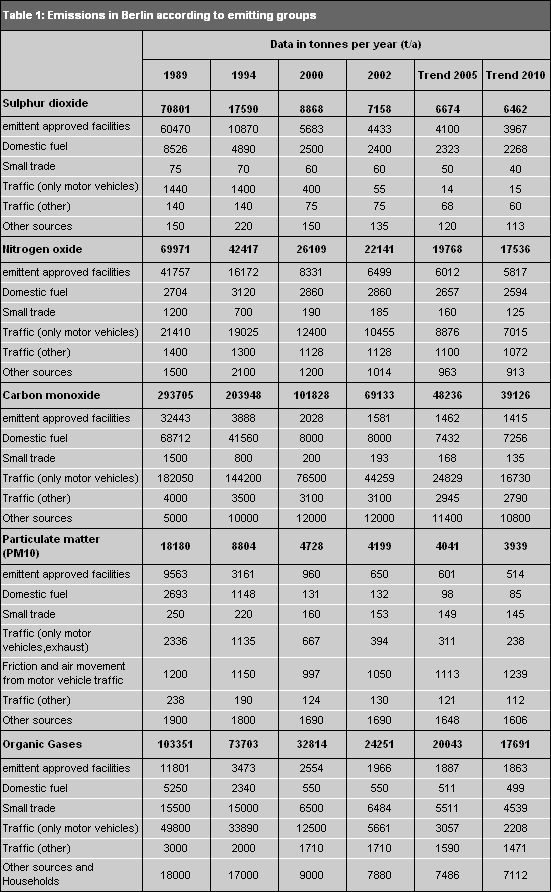 Tab. 1: Emissions in Berlin According to Emitting Groups 1989 to 2010 (Trend)
Image: Umweltatlas Berlin

In addition, fine particulate emissions from motor vehicle exhaust between 1989 and 2002 have decreased by more than 80 %. This rings true with the readings of measured diesel soot in street ravines – the main component of motor vehicle exhaust emissions: the measured soot concentration on the Frankfurter Allee, in the Berlin district of Friedrichshain, at monitoring station 174 of the Berlin air quality observation network BLUME has fallen by almost 40 % within the last 6 years. However, since fine particulates from friction and air movement caused by street traffic have barely decreased during this time, after other sources, street traffic is the main source of particulate matter in Berlin. Street traffic causes 34 % of the fine particulate emissions in Berlin, while other sources cause 40 %.

Noticeably high in comparison are the pressures from motor vehicle traffic in the inner city center, where over one million people live in an area of 100 square kilometres. Especially here, if current trends for use of and competition for space continue, motor vehicle traffic will increase. If current conditions continue, especially freight transport will encounter increased bottlenecks in the streets.

In order to influence these partially incompatible but health-relevant developments for the city, Berlin has developed two planning strategies that compliment each other:

With the City Development Traffic Plan, the Berlin Senate (with a resolution from July 8, 2003) has presented an action plan which combines the possible and necessary steps to further develop the Berlin traffic system for the coming years with a long term strategic orientation. The essence of the action plan forms a catalogue of measures that were previously analyzed in detail and balanced according to their effectiveness, acceptance and financability. The investigations of the Clean Air Preservation Plan Berlin are based on this long term action plan in regard to the future development of traffic in Berlin and the surrounding area.

“Health and Safety”, one of the central strategies of the City Traffic Development Plan, already considers a number of important strategies to limit the increase of motor vehicle traffic resulting in the reduction of air and noise pollution in the main traffic network.
The implementation of the measures of the City Traffic Development Plan is expected to be completed by 2015.

The Clean Air Preservation Plan at hand discloses information about the legal framework, information about the prevailing situation, and describes the causes of air pollution. The measures take into account future atmospheric changes until 2010. The focal point is the presentation of a broad range of potential measures and their evaluation. Based on the effectiveness of these measures a strategy for the Berlin Clean Air Preservation Plan will be developed. The Clean Air Preservation Plan documents that Berlin, as do many other large German and European cities, is challenged to meet the new EU limits.
The important results came from the “made in Berlin” measures which reduced fine particulates from the urban background and other sources by about half. Urban background pollution is mostly caused by street traffic (16% of the total pollution of PM10). The rest (11%) is made up of approximate equal parts from Berlin residential heating, industry / power plants, construction, and other sources within the city.

The results of the measurements from last year and those carried out with the year 2002 calculation model lead, among other things, to the following conclusions:

Nitrogen oxides are acidifiers. They are harmful to human health, cause damage to plants, buildings, and monuments, and significantly contribute to the excessive formation of ground level ozone and various noxious oxidants during summer heat waves.

Nitrogen oxide, and especially nitrogen dioxide lead to irritation of the mucus membranes of the air passages in people and animals and can increase the risk of infection (see Kühling 1986). As well, cell mutations have been observed (BMUNR 1987). Various epidemiological studies have shown a correlation between the deterioration of the lungs’ respiratory tract symptoms, and increased nitrogen dioxide (see Nowak et al. 1994).

Diesel soot is a major component of fine particulate matter (PM10) in motor vehicle exhaust. It is a carrier for polycyclic aromatic hydrocarbons (PAK), a cancer risk, and, on their own, are also possible causes of lung and bladder cancer (see Kalker 1993). Moreover, ultra fine particles such as diesel soot which are smaller than 0,1 µm, are suspected to increase the risk of cardiovascular disease.

Air pollution from motor vehicle traffic could only be evaluated by emission control authorities starting in 1985, after the European community, in the “Guideline Advice of 7 March, 1985, About Air Quality Standards for Nitrogen Dioxide” (Guideline 85/203/EWG), specified limits and goals for this pollutant. In addition, it prescribed measurements of concentrations of nitrogen dioxide in street ravines and at focal traffic points.
In 1996, due to a multiplicity of new findings regarding this, as well as other air pollutants, “Guideline 96/62/EG About the Evaluation and Control of Air Quality” (the so-called “Framework Guideline”) was written and brought into force.
In this guideline the Commission is called upon to submit, within a specified time period, so-called “Sub Guidelines” specifying limits and details for measurement and evaluation of a given list of components.

In the meantime, three Sub Guidelines have come into force:

Two years were allocated to enact the first two Sub Guidelines into law. The first Sub Guideline was enacted in September 2002 in the Seventh Amendment of the State Emissions Protection Act (BImSchG), well beyond the allotted two years. The new Ozone Guideline was, in the meanwhile, enacted into German law in the new 33rd Ordinance of the BImSchG.

The essence of the air quality Guidelines is the emission limits , which “must be achieved within a certain time frame and are not to be exceeded thereafter”. The pollution concentrations, and the time in which the limits must be met, are stipulated in the Sub Guidelines, i.e. in the 22nd Federal E Protection Law.
Table 2 shows the stipulated limits for the two air pollutants which are the largest potential problem for Berlin: PM10 and nitrogen dioxide.

According to Paragraph 1 of the 22nd BlmSchV, Berlin is a conurbation in which the air quality must be evaluated annually and, if necessary, steps must be taken to comply with the limits. The complete city was designated as a planning area for the possible establishment of a plan to preserve air quality. Exceeding the limits occurs everywhere in the city, especially on main traffic streets. Therefore it is not sensible to limit the planning area to parts of the city , or to divide the city into distinct planning areas.

Problems In Applying Guideline 99/33/EG and 22. BImSchV, For Example, PM10 Pollution in the City

In the proximity of high pollution emissions, such as on street ravines, high concentrations of emissions are evident. Unlike in most industrial areas, there are many people on traffic filled streets, whether they be residents, customers or workers, who face an increased exposure to pollution. In order to meet the EU Guidelines for emissions at the locations of highest concentrations, quantification of damaging pollutants must be as accurate as possible. In addition, in Berlin the said measurements are supplemented with model measurements for all traffic congested streets in which limits could potentially be exceeded.
However, even on a traffic congested street ravine, pollution, whether from other sources or transported from a distance, plays an important role. Therefore, for the planning of measures to improve air quality in Berlin, a model system was used. The model applies to:

and calculates the effect of pollution from the surrounding area as well as the effect of all emitters within the city, even on traffic congested street ravines.

From the said investigations of the origin of particulate matter in Berlin, a simplified diagram shown in figure 1 was developed to show the spatial distribution of PM10 concentrations in Berlin and the surrounding area. 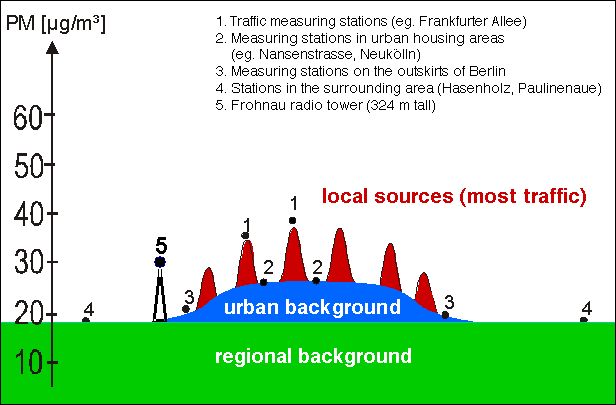 Fig. 1: Diagram showing the concentration of fine particulate (PM10) pollution in Berlin and the surrounding area
Image: SenStadt 2005b

In 2002, widely distributed baseline measures (green space) exists that almost amounts to 20 µg/m3 on the basis of measurements at several rural stations in Brandenburg. The portion described as regional background pollution is, outside of the city, relatively evenly distributed, as the widely distributed model results show. Added to that, the “made in Berlin” sources of pollution cause part of the PM10 pollution. It can be divided into:

In summary, in Berlin, barely half of the PM10 pollution measured at stations near traffic in the inner city comes from the regional background and the remaining, “made in Berlin” portion, is fine particulate pollution equally divided between contributions from local traffic and the pollution sources in the remainder of the city. Only this portion can be influenced by local measures in Berlin.