The sealing of the natural soil by construction has a number of negative effects on the ecosystem and the human habitat. In the following, the soil is considered sealed if it is covered with solid material. Sealed areas are categorized as either built-up or non-built-up sealed areas. In addition to structures and surfaces completely sealed with asphalt or concrete, surface sealed with more permeable coatings are also considered “sealed,” although, as in the case of lawn pavers or wide-seamed pavement, they may still permit reduced plant growth.

The effects of sealing are primarily noticeable in cities and urban areas, where a high share of the total area is sealed.

Effect of Sealing on the Ecosystem

The effects of sealing on the climate, the water balance, the soil, the flora and fauna and the human habitat will be described briefly below.

Sealing contributes to the creation of a specific urban climate, with the high heat-accumulation capacity of buildings and asphalt streets causing the air to heat up. Especially during the summer, this reduces nighttime cool-off (cf. Fig. 1). 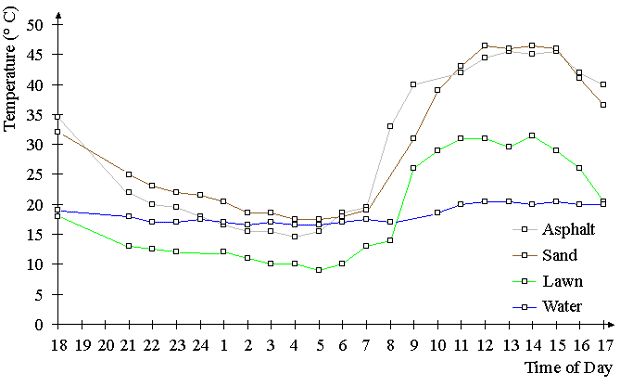 At the same time, the relative atmospheric humidity is also reduced, since vegetation surfaces and the resulting evaporation are lacking (cf. Maps 04.04, 04.05, 04.06, 04.07 SenStadtUm 1993). This can lead to the occurrence of extreme values, which can impair human well-being considerably.

The effects of sealing on the Berlin urban climate are shown in detail in various maps in the Climate section.

In this regard, non-sealed areas such as parks play a major role; even areas of one hectare in size can demonstrably have a positive climatic effects on human well-being. Vegetation-covered areas also affect the dust and pollutant-content levels of the air, since their large leaf surfaces can bind dust and other air pollutants.

The sealing of the soil also causes significant changes in the water balance, due to the loss of seepage surface for precipitation. Groundwater recharging, which is necessary for water supply, is reduced. Rainwater which falls on sealed areas is heavily polluted by tire abrasion, dust and dog excrement, and is then drained into the river tributaries via the sewage system, either directly or through a treatment plant (cf. Map 02.09, Disposal of Rain and Waste Water). In municipal areas with separate systems for rainwater and sewage, the rainwater flows directly into the local bodies of waters, and pollutes especially smaller bodies with its high load of pollutants. In areas with mixed-sewage systems (common treatment of rainwater and sewage), overloading of the sewage system or pumping stations may occur at times of strong rainfall, which will also cause untreated mixed water to enter directly into the local bodies of water. In addition, the increased degree of sealing can lead to aggravated danger in flood-prone areas; this is a considerable factor in areas such as the catchment area of the Panke (Geiger 1992).

Sealing and compression strongly affect the functions of the soil. Blocking of the water and oxygen supply destroys soil organisms. Since no more water can seep away, pollutant immissions from the air are no longer held in the soil, but are washed into surface waters by precipitation.

The total sealing of a segment of soil causes the complete loss of flora and fauna there. Partial sealing, however, also always causes habitat loss. Biotopes are cut off or fragmented, and sensitive species are replaced by more adaptable species.

In addition to the above-described effects on the ecosystem, the degree of sealing of a municipal area also has an immediate effect on human habitat. Thus, a high degree of sealing usually goes hand-in-hand with a low supply of green and open spaces per capita of the population. And endless row of buildings, interrupted only by asphalt or concrete surfaces, can have a depressing, monotonous effect on residents. People can no longer experience such factors of nature as the change of the seasons directly in their immediate surroundings. In order to recapture some part of the experience of nature, it is necessary to make relatively long trips to the outskirts of town or to the surrounding countryside.

The description of the development of sealing in the text of the 1993 Version was based on the expansion of developed and transportation areas as recorded in the statistics of the State Statistical Agency. However, these quantitative facts on land consumption provide only limited informational value for the description of actual soil sealing. For example, green and open spaces within developed areas are not recorded, so that if they are later built upon, such activity is not included as an increase in sealing. Even if no further increase of settlement and traffic areas were to take place, sealing of the city could nevertheless increase, e.g. by densification of existing developed areas.

Since the Land Register is the basis for the survey, actual land coverage will continue to be inaccurately assessed in the future. Thus, many large lots identified as a “buildings and open areas” do not in fact currently contain buildings.

The figures for developed and transportation areas are thus more suitable for the characterization of the increase in the developed area as such. Land consumption thus means purely and simply the development of woodland and farmland. Since the wooded areas in Berlin are largely protected, land consumption in effect means the reduction of farmland; building on allotment gardens and parks is not included.

For the time period before 1989, for West Berlin, these figures provide at best a rough summary of impacts within developed areas, and hence of a potential increase in sealing.

For the time period after 1989, no comparable data of the State Statistical Agency on residential development are available, because of the differently defined statistical quanta for West and East Berlin.

The text for Map 06.03 Green and Open Spaces describes the development of land consumption through 2000 on the basis of higher-resolution block-referenced data from the Environmental Atlas and the GIS “Areas with Change Potentials of Overall Urban Significance.” This shows that land consumption within the city boundaries of Berlin was reduced dramatically during the decade 1990-2000 (from 370 hectares per annum between 1980 and 1990 to 48 ha/a). At the same time, however, a major increase in land consumption could be ascertained in the nearby surrounding countryside.

Aside from the development of land consumption, the development of the overall degree of urban sealing is of interest with regard to this Map. The data now available make possible the calculation of changes carried out in the interval. However, it should be noted that the methodologically-based differences in data collection allow only a limited comparison of firm values. The data base for sealing is primarily based on a calculation of environmentally-related models, with greater importance attached to the precision and topicality of the recorded data than to its methodological comparability with that from earlier time periods.

The block-based sealing degrees (cf. Methodology) of the present updated Map, ascertained for the time period between 1990 and 2001, show only a very low increase in the level of sealing, which corresponds to the low land consumption during that time period. It must be taken into account that any changes carried out in the meantime in the not-updated stock have not been included. The main-focus update carried out concerns only the approx. 20% of the blocks the use of which was fundamentally changed during the time period stated.