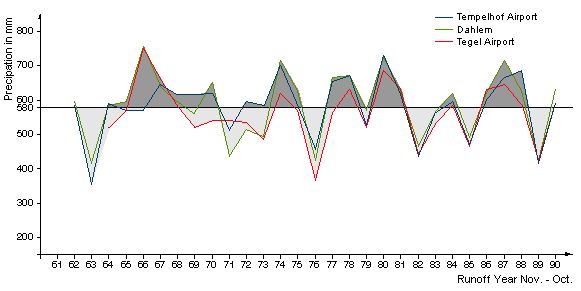 The distribution of winter snow and rain differ both from the total annual as well as from the summer half-year distribution. The variations are generally lesser than in the time periods of observation mentioned above. Areas with the largest precipitation quantities of 275 mm are concentrated within the Tegel and Grunewald forest areas only. Values fall under 240 mm in the eastern urban area and west of the areas of maximum quantities. This distribution pattern shows the influence in the winter half-year of mainly eastern continental prevailing winds carrying little precipitation. The influence of urban development shows its first effects west of the Neukölln, Schöneberg, Charlottenburg, Reinickendorf boroughs. Urban development effects then combine with the roughness effects of the forested chain of hills. Precipitation distribution in the summer half-year (May to October) is very similar to the annual total distribution. The Grunewald forest range of hills and the effects of urban development both influence maximum precipitation here too. In contrast, areas with minimums under 300 mm can be recognized in adjacent eastern and southern areas. In comparison to the winter half-year, (Map 04.08.1) an average of 80 mm more precipitation falls in the summer months. This is due to the marked influence of maritime west wind weather conditions in these months.

The highest values (>600 mm) clearly appear in the western urban areas of the Grunewald and Tegel forests. This chain of hills, although only weakly formed, produce slope rains (orographic precipitation) from prevailing western currents. Lower precipitation quantities to under 540 mm are registered in the lee of the heights in the Spree river lowland area, and in the central municipal boroughs of Charlottenburg, Tiergarten, Wedding, Mitte, Kreuzberg and Schöneberg. These lee effects continue in the city’s southern area and in the adjacent surrounding countryside, where values under 540 mm are again found in the Grossziethen/ Wassmannsdorf area. The influence of urban structures is clearly seen east of a line from Prenzlauer Berg, through Lichtenberg, the northern areas of Treptow, and Köpenick. The increased roughness effect of buildings causes an effect similar to that at the Grunewald hills. Rain levels here are also barely 600 mm. The urban heat island effect is visible in convective precipitation. Decreasing amounts of precipitation due to the lee effects of the city appear again in the eastern adjacent surrounding countryside.