Treptow-Köpenick has the lowest degree of sealing among the boroughs, with 19%, while Friedrichshain-Kreuzberg and Mitte are the boroughs with the highest degrees of sealing, 68 and 61%, respectively. The share of built-up areas is also highest in these boroughs.

The highest degrees of sealing appear within the urban-rail ring line in the old residential buildings. Residential areas which still have predominantly closed dooryards show degrees of sealing of more than 90%. But the major industrial and commercial districts are also sealed to a high degree. Particularly the areas of long-standing industrial us along the Spree from Spandau to Köpenick, and the extensive industrial areas in Lichtenberg, Marzahn and Hohenschönhausen are more than 90% sealed

Overall the degree of sealing drops as one moves from the center toward the outskirts. This corresponds to the fact that the density of buildings is reduced toward the outskirts, and these outskirts are either completely undeveloped (woods, farmland), or characterized by detached housing. Certain exceptions stand out: The traditional centers of cities like Spandau and Köpenick, which were independent until 1920, are more than 60% sealed, climbing to over 90% sealed in their core areas. The major new development areas in the outskirts, such as Marzahn, Hellersdorf and Hohenschönhausen, Gropiusstadt in Rudow, or the Thermometer District in Lichterfelde, are between 50% and over 80% sealed. 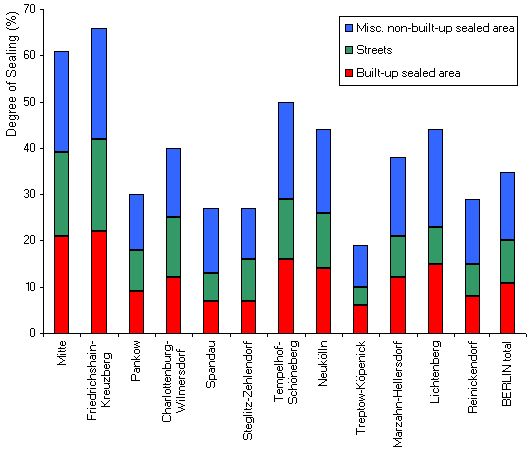 In order to permit comparison with the 1993 Version, the values under Data Bases are also referenced according to the borough division that existed prior to the local-government reform of 2000 (consolidation of 23 boroughs to the present 12).

The more loosely-built developed areas at the outskirts have differing degrees of sealing. Remote areas such as Heiligensee, Frohnau, Kladow or Müggelheim show the lowest densities, with degrees of sealing of between 10 and 30%. The classic single-family and row-house areas like Lichterfelde, Marienfelde, Kaulsdorf, Mahlsdorf, Karow or Blankenburg have degrees of sealing of around 20-40%, while areas which include more municipal functions, like Dahlem, Westend or Friedrichshagen are up to 60% sealed.

As a rule, woodland and agricultural land is unsealed. Nevertheless, here too there are uses which have a notably high degree of sealing. Especially the Grunewald looks like a patchwork on the map, due to its many and various uses. Military and former military areas (the Teufelsberg, the shooting range and the ammunition depot), a tree nursery, allotment gardens and riding facilities have in some cases high degrees of sealing. Notably high degrees of sealing are shown by the communications tower on Schäfersberg hill in the Düppel Forest, and the two big excursion restaurants with a large-scale parking lot on the southern shore of Müggel Lake in the Köpenick Heath.

Of the total sealed area of Berlin, 9.3% are occupied by roadways. These accounts for a full 20% of the area of the borough of Friedrichshain-Kreuzberg, approximately the same amount as each of the other two categories, built-up and non-built-up sealed. In the outer borough of Treptow-Köpenick, roadways occupy only 4%, or approximately half the area attributed to built-up and non-built-up sealed areas, which is in effect an expression of the considerably lower development density of that borough.

Comparing these 2001 figures with those of 1990 (1993 Version), the forecast made at that time of an increase in the overall degree of sealing has failed to materialize. As has already been stated, land consumption has been greatly reduced in this decade, so that available figures do not indicate any major increase in the overall level of sealing.

However, we should stress once again that such factors as greater density in detached-home areas with hitherto looser building patterns, or de-sealing measures in inner-city developed areas in the non-updated stock, have not been included in these figures.