Heavy rainfalls can thus contribute to small-scale changes in the connected annual or semi-annual means. Considering the long-term period from 1981 to 2010, however, the impact of individual events is rather insignificant, as heavy rainfalls are quite rare and random in their distribution.

The weather conditions in an area are greatly influenced by its topography (surface structure of the earth). Mountain ranges, smaller hill chains, and even lower ridges already have an impact on the amount of precipitation. Other influencing factors include forests, lakes, fields and such (cf. Flohn 1954, only in German). Furthermore, cities with their agglomerations of buildings influence the quantity and distribution of precipitation once they reach a certain size.

Increased precipitation due to, for example, relief rainfalls within a confined area are mainly caused by the influence of soil friction, i.e. the surface roughness parameter. Soil friction slows down the lower air layers, causing subsequent air masses to accumulate and rise. Adiabatic cooling may effect the formation of clouds and precipitation. Additionally, aerosols tend to accumulate above urban areas more often. As condensation nuclei, they influence the formation of clouds and precipitation. In addition, the heat emanating from urban areas may contribute to convective precipitation, if additional constraints come into play.

In contrast to the evaluations of the previous update of 1990 for the reference period from 1961 to 1990, the evaluations in the current update are based on grid data provided by Germany’s Meteorological Service (DWD). Due to the different data bases and resulting differences in methodology, the current results and these of the long-term mean precipitation distribution between 1961 and 1990 of the Berlin Environmental Atlas may only be compared to a very limited extent.

Precipitation is an essential component of nature. Animals, plants, and indeed us humans cannot survive without it. To analyse the effects of precipitation, however, a differentiated approach is needed. On the one hand, precipitation causes a cleaning process of the air. On the other hand, highly impervious surfaces and their according use cause precipitation to flush out a variety of pollutants. The latter are then able to enter rainwater drains and combined sewerage systems and eventually make their way into our bodies of water, too.

A lack of precipitation affects animals and plants alike, which may lead to permanent damage. This is especially true if dry periods occur increasingly, as has been the case in recent years. The simultaneous increase in heavy rainfalls, however, does not compensate for the lack of precipitation in the water balance. Soils, especially when dry, are unable to absorb this copious amount of precipitation. The precipitation therefore largely runs off superficially and does not contribute to the regeneration of the soil water store. What is more, heavy rain can also cause soil erosion. Flash floods resulting from heavy rain also pose a danger to people, animals and property.

Berlin is located in an area of transition, where the climate shifts from continental to predominantly oceanic. This is reflected in Berlin’s precipitation conditions on a regional scale. Berlin is one of the drier regions of Germany. Incidentally, the annual mean precipitation for Germany was 789 mm per square metre for the standard reference period from 1961 to 1990, whereas it ranged between 551 and 600 mm per square metre for Berlin for the same period (cf. Fig. 1). 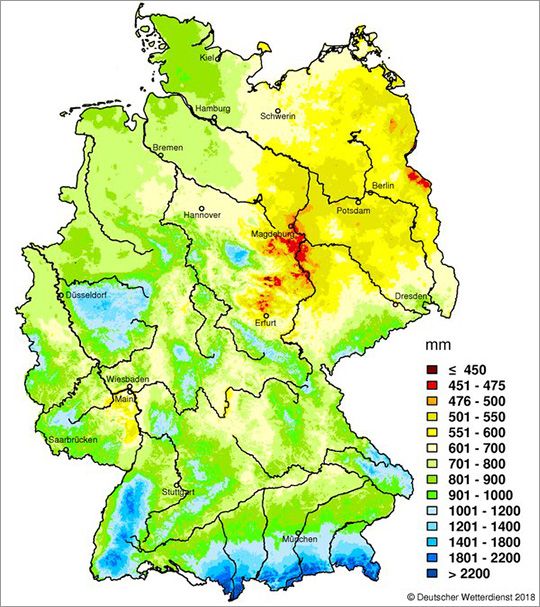 This chart was produced on May 23, 2018 using data of all stations of the network of DWD.

In addition to the above-mentioned factors, the global climate change is also expected to influence our regional water supply more and more in the future. Over the past 10,000 years, changes in climate have altered the geographical distribution of precipitation dramatically. Forecasts of potential developments largely depend on future greenhouse gas emissions and are being studied by authorities such as the DWD (cf. DWD 2020, only in German). According to the DWD, the annual precipitation is predicted to increase slightly (+6%) in Germany by the end of the century. The winter months and the transitional seasons are expected to see an increase in precipitation. Depending on the scenario, precipitation is predicted to remain unchanged or even decrease during the summer.