Water Conservation Districts and Groundwater Use 1990 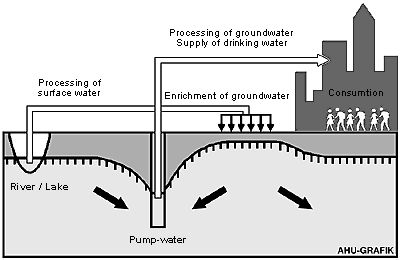 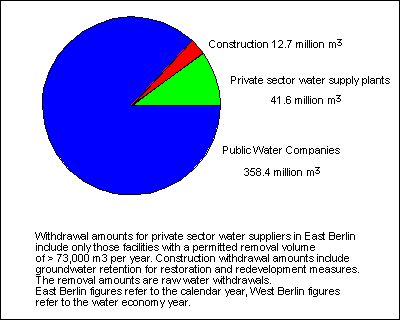 Fig. 2: Groundwater Withdrawal Amounts in Berlin According to Use in 1989 (including Stolpe waterworks)
Image: Umweltatlas Berlin 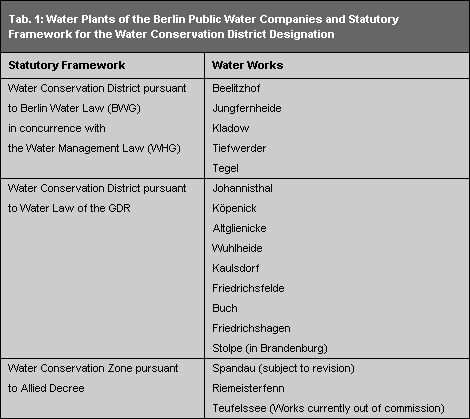 The remaining nine, 8 in East Berlin and the Stolpe waterworks north of the Berlin city limits, are protected by the GDR Wassergesetz (Water Laws) and its 3rd Durchführungsverordnung (Implementation Regulation) of 2 July 1982. The technical basis is the TGL 24348/01-02 .

A depiction of East and West Berlin in the same map must take their different criteria in the definition process into account and thus the prohibited and limited permissible actions in individual protection areas.

West Berlin water conservation districts are defined according to both the Water Management Law and the Allied Water Zone Protection Regulation.

Water conservation districts are determined by Section 19 of the Wasserhaushaltsgesetz (Water Management Law) or Section 22 of the Berliner Wassergesetz (Berlin Water Law). They are divided into 3 protection areas with differing protection status; certain actions are forbidden or permissible with limitations. The borders of protection areas and descriptions of limitations of use are defined in the respective regulations for the respective areas.

The size of the protection areas is measured according to the DVGW Regelwerk (DVGW Regulatory Rules) "Richtlinien für Trinkwasserschutzgebiete" (Guidelines for Drinking Water conservation districts). The areal extent of Zone I is generally at least 10m surrounding the extraction well. Zone II reaches from the border of Zone I to a line at which groundwater requires 50 days to seep into the extraction well feed area. Zone III comprises the area between the outer border of Zone II and the border of the subterranean watershed. If the watershed is larger than 2 km, a subdivision into conservation district III A and III B is possible.

This guideline, however, is only a recommendation and has not been implemented in this form in West Berlin. Zone II here has an areal extent of 100m around the extraction well. Zone III reaches only from the border of Zone II to a 500m radius around the extraction site. The enforcement of the guidelines mentioned above in the definition of water conservation districts would have led to considerable conflicts regarding land-use.

The rigid radius drawn around the extraction well does not take into account the differing hydrological and geological conditions in the watersheds of the individual water withdrawal sites. Regulations are currently being revised for this reason. The water conservation districts of Tegel and Jungfernheide have recently been redefined. Their borders were determined by different criteria, according to the isochronic concept (cf. Fig. 3). The isochronic concept determines the size of water conservation districts and their geometric forms in pure hydraulic terms: from the flow time of water to the removal site. Lines of identical flow time are called isochrons. The determination of the isochrons, and thus the conservation district boundaries, proceed from hydrogeologic examinations of a given area. A regional groundwater flow model is developed for this area. The goal of the concept is to have sufficient time for damage control should soil be contaminated. 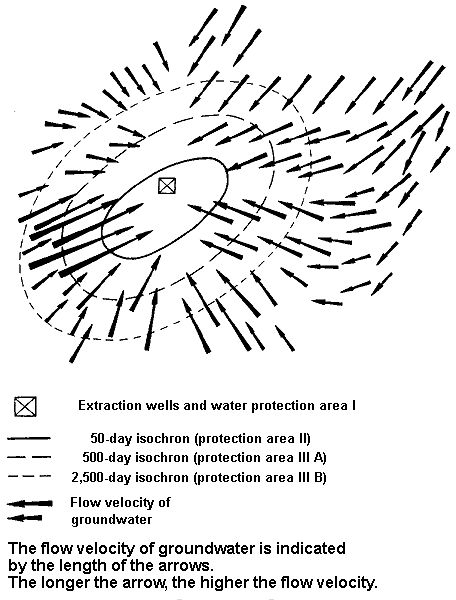 Fig. 3: Example for Definition of a Water Protection Area According to the Isochron Concept
Image: Umweltatlas Berlin

Supplements and extensions of use-limitations within protection areas resulting from the application of the isochron concept are being undertaken in a new draft of the Water Conservation District Regulations.

The Berlin Landscape Program of 1988 defines water production areas in West Berlin to be Priority Areas for Groundwater Protection. These planning definitions are binding for public authorities but are not legally binding. They are to serve the priorities of restoring existing polluted areas and/or to prevent facilities which present a potential threat to groundwater from being established within 2 km of withdrawal wells.

The water conservation districts in East Berlin were defined under GDR law. The legal basis is the Water Law of the GDR in its 3rd Durchführungsverordnung (Implementation Regulation) of 7 February 1982 in regard to protection and reserve areas. The East Berlin protection areas enacted at the 14th Berlin city council meeting on 19 October 1984.

The technical basis for the definition of water conservation districts in the GDR was [TGL 24348]{.underline}/01-02 (effective 1 Sept. 1980). This differentiated 3 or 4 conservation zones, but 3 zones are usually used. Conservation zone I includes the direct area around the well or well gallery. The areal extent is at least 5m around the well. Conservation zone II should be large enough that possible microbial and biological degradation pollutants which might contaminate water are eliminated by the time the water enters the well. This is usually accomplished after unpurified water has been in the ground for 30-50 days before it is used again. The borders of Zone II are defined by calculations of the groundwater flow velocity. The borders thus vary according to subterranean conditions and run about 300-600m from the well. The areal extent of Zone III reaches maximally to the subterranean or surface watershed. Zones II and III are substantially larger than in West Berlin.

The GDR also determined reserved areas for future water supply production, where no groundwater is currently withdrawn. Special use limitations are in force in these areas, provided in the Water Law of the GDR or in TGL 43271 of Sept. 1984.

Water conservation districts in the surrounding areas of Berlin are also defined according to GDR law. New delineations and changes in conservation areas, and changes in protective status or area associated with a new definition, can only take place after the enactment of a Brandenburg state water law.

Use Limitations in Water Conservation Districts

Substantial discrepancies between requirements and use limitations exist beyond the differing procedures used in East and West Berlin to determine protection area borders, and their different resulting sizes.

All actions – except measures necessary for maintenance of the water supply – are forbidden in Zone I in federal German law. The GDR permitted agricultural use as a meadow to be mown and short-term pasturing of sheep, depending on local conditions; the use of solid organic manure; and the use of forests, in accordance with specific, basic management principles.

GDR law permitted mining and drilling in conservation zone II under certain conditions, but not for the purposes of water supply. Development was possible under certain restrictions. Storage and transport of liquid organic manure were not strictly forbidden; nor was construction of traffic ways (and its consequences, such as winter anti-icing salts and grit).

Protective ordinances for Zone III allowed the mining of clay, sand, gravel, and stone quarries. Depot operation for residual products was permitted, as was handling oil, oil products, and other water endangering liquids.

These actions, permissible in certain conservation areas under certain conditions, are examples from the TGL of December 1979. The new TGL of April 1989 (TGL 43850) was more precisely formulated in many points. It also set considerably wider use limitations and bans. Some of these went further than West German law. Yet they have not been the basis for defining any water conservation districts in East Berlin. The protective status for individual conservation zones in East and West Berlin is not comparable, because the older TGL in East Berlin defined considerably fewer use limitations.

There is a number of smaller groundwater supply facilities in the private sector, usually for industrial purposes, or commissioned by public facilities. Water is withdrawn and treated in these private sector water supply plants by users themselves. This water is not drawn as a finished product from the Berlin Public Water Companies. These plants are usually established and run by industrial and commercial operations, but also by public institutions such as hospitals and swimming facilities. The groundwater they withdraw is used as drinking, operating, and cooling water, and to water plants, lawns and meadows. Both the Berlin Public Water Companies and private sector water supply plants require official permits or special approval with specified use conditions and restrictions. These are mandated by the Berlin Water Economy Law or the Berlin Water Law for Water Supplies.