The parameters observed the “Environmental Atlas – Methodology” and are to characterize local and regional surface waters quality. Characterization of waters by the “LAWA Method” (Länderarbeitsgemeinschaft Wasser 1991) proceeds on the basis of a variety of parameters and is summarized for a total evaluation. For this work, however, 5 of the parameters most important for eutrophication of Berlin waters were considered, separately evaluated and presented. They are orthophosphoric-phosphorus, ammonium-nitrogen, the oxygen saturation index, oxygen minimum, and Titer for Escherichia coli. A clear and differentiated presentation of the relatively small investigation area of Berlin can thus be made.

Following the example of water quality maps of the Federal Republic of Germany, classifications were made into 4 quality classes with 3 intermediary levels. Class limits for the 2 oxygen parameters followed water quality mapping classes chosen for use by the LAWA. Concentrations of orthophosphoric-phosphorus and ammonium-nitrogen nutrients are categorized into quality classes so that load levels of the various parameters can be compared. Phosphorus amounts are the limiting factor for algae growth. The eutrophication threshold for dumping up running waters is generally given as 0.01 – 0.03 mg/l. The value 0.01 mg/l is thus the upper limit of quality class 2, “moderately polluted”. The classification for ammonium-nitrogen was taken from the Rhine River report of 1978, in which ammonium-nitrogen was classified into 7 categories (IWAR 1978).

Bacteriological parameters of Escherichi coli (E. coli) are observed here in the presentation of water quality for many waters in Berlin used for swimming and water recreation.

Only the most important running waters in Berlin and some running water sections in the state of Brandenburg directly bordering Berlin are included in the appended map. Waters were divided into 99 sections, each usually with a measuring point in the middle of the section. The study results of these measuring sites are considered representative for the entire section.

Values appearing in the summer half-year (1 May to 31 October) were used in order to measure the time-span of biological activity particularly critical for polluted waters. Parameters observed for orthophosphoric-phosphorus, ammonium-nitrogen, and the oxygen-saturation index were mean values of the summer half-year. The most unfavorable single value in this time span is given for oxygen levels and E. coli Titer.

Measuring results are evaluated and depicted in differentiated colors, according to a 7-step scale from “practically unpolluted” to “extremely polluted”, similar to earlier presentations of other outflow years in the Environmental Atlas.

Phosphates exist in water in various forms, but phosphates can only be taken up and used by plants to build up their own physical biomass in the form of dissolved orthophosphoric ions.

The majority of phosphates in Berlin waters come from domestic effluents, particularly from feces. The use of cleaning agents containing phosphates also contributes to phosphate loads.

A large portion of Berlin sewage waters is dephosphorized in sewage treatment plants today by biological phosphate elimination or by chemical phosphate removers. 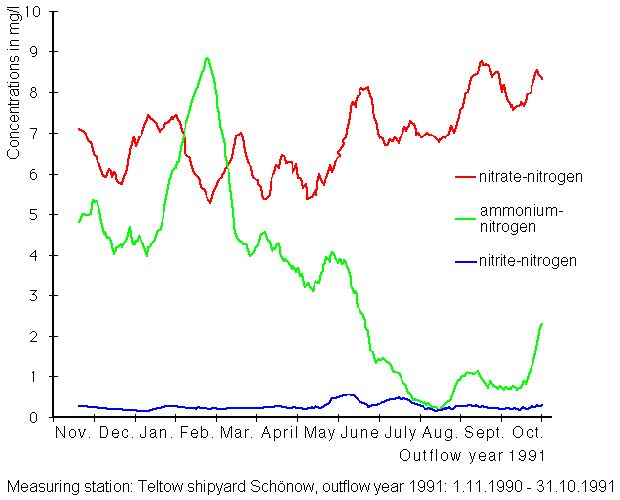 Fig. 1: Concentration of Ammonium-Nitrogen, Nitrate-Nitrogen and Nitrite-Nitrogen in the Teltow Canal for the Outflow Year 1991 (floating medien over 20 days)
Image: Umweltatlas Berlin

Organically-bound nitrogen is present in waters as proteins originating from dead organisms. Plants can use the nitrogen needed to build up their own proteins usually only in the form of nitrates and ammonium ions. Nitrogen compounds in water must first be transformed. This is done by micro-organisms that decompose protein substances in water. Other micro-organisms transform the resulting ammonium under aerobic conditions (in the presence of oxygen) first to nitrites and then to nitrates.

During the spring to autumn period of high biogenic activity, the substance transformation process proceeds faster, so that parallel to low ammonium amounts, higher nitrate amounts exist in the waters. Nitrite is only a transitional product in this transformation, so nitrite amounts in waters usually remain low. Figure 1 shows amounts of ammonium, nitrites and nitrates at the Teltow shipyard Schönow measuring station. The depicted substance transformation process in waters at this measuring station were substantially influenced by the discharge pipelines of the sewage treatment plant. Low ammonium loads in summer at this sampling station, behind the Ruhleben sewage treatment plant, are mainly due to the better clarification performance of this treatment plant in summer. The fact that ammonium levels in summer drop more strongly than nitrate levels rise is explainable by the binding conversion (fixing) of nitrates by algae.

The greatest portion of nitrogen compounds in Berlin waters originate from domestic effluents. Sewage treatment plants have particularly negative effects on the oxygen economy of water. They discharge a high proportion of ammonium-nitrogen and the decomposition process to nitrate takes place in the waters themselves. The transformation of 1 mg/l of ammonium-nitrogen to nitrate-nitrogen requires about 4.4 mg/l oxygen. 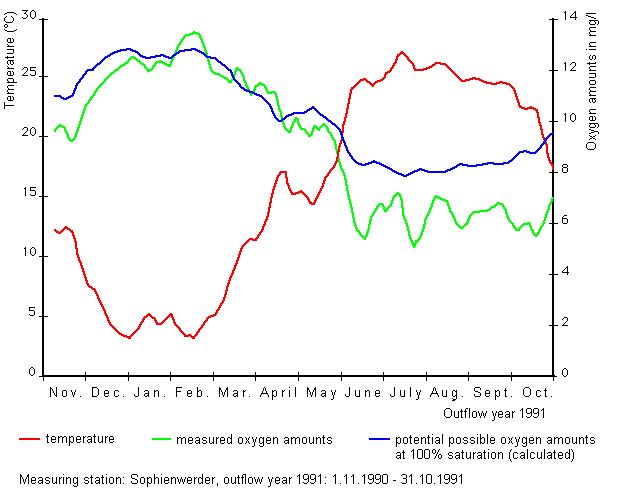 Fig. 2: Water Temperature and Oxygen Levels in the Spree for the Outflow Year 1991 (floating medien over 10 days)
Image: Umweltatlas Berlin

Besides high temperatures in summer, the warming of waters by cooling water discharges leads to a further impact on the oxygen economy. All chemical and biological processes are accelerated; oxygen demand increases while the capability for absorption of oxygen drops. Increasingly critical oxygen levels are then shown precisely in slowly-flowing waters that form large surface areas, lake-like broadenings of running waters.

Oxygen needed for the respiration of all organisms is given into water through the air or through photosynthesis by water plants. Oxygen amounts of impacted, slowly-flowing waters are subject not only to climatic changes (wind speed, temperature, light penetration, etc.) but also to annual and daily variations due to excess algae growth. Additional oxygen by the assimilation capabilities of algae can only be produced in the upper layers of water. The penetration depth of sunlight into a body of water is a critical factor.

Individual types of fish each require certain environmental conditions for their survival. One such condition is a minimum amount of dissolved oxygen in waters.

Highly critical oxygen conditions can always occur in waters with large rain water or mixed rainwater and sewage system discharges after heavy rainfalls. Organic substances transported by inflows are decomposed by bacteria with considerable oxygen demand. More oxygen in waters may be used than can be reaerated from the air or from biogenic production. Oxygen amounts below a certain limit (about 4 mg/l for carp) are critical for fish. Any further drop in oxygen amounts will cause fish to die.

The complex and quickly occurring changes in the oxygen balance in waters with high levels of nutrients and intensive phytoplankton development can be only incompletely registered by measurements every month or every 14 days. The tense situation of oxygen conditions in Berlin waters is reflected in the fluctuations of oxygen amounts, which vary considerably depending on the time of day, at continually measured monitoring points.

Tests for Escherichia coli (E. coli) are made to determine bacteriological qualities of waters – particularly their suitability for swimming and water recreation. E. coli itself does not usually cause disease. Its presence, however, gives an indication of the pollution of a body of water from animal and human feces. If large amounts of E. coli are present, the water is heavily impacted with fecal effluents. That means the probability that disease bacteria are present increases with increasing amounts of E. coli. The measurement scale is Coli-Titer, the minimum amount of water in which E. coli can be detected.

EU bathing water guidelines for surface waters suitable for swimming give an E. coli Titer of 10-1 ml as barely tolerable.

Chlorophyll a amounts in waters are also presented separately. This depiction is in keeping with the Environmental Atlas standard because one of the main problems in Berlin waters is high nutrient impacts.

The pigment exploitation of the diatomic algae, which appear in spring and late autumn, is somewhat higher by the same wavelength in tests than that of blue-green algae, which form primarily in summer. The comparison of chlorophyll a values with counts determined by census of algae biomasses is thus recommended at special measuring points.

The development of phytoplankton composition varies according to the time of year and depends on various factors, including temperature, light penetration, zooplankton development, and level and type of nutrients. While diatomic algae (Bacillariophyceae) develop primarily in spring, blue-green algae (Cyanophyceae) dominate the phytoplankton make-up in high-summer (cf. Fig. 3). Precisely the higher temperatures and intense light penetration in high-summer facilitate algae growth. If excess loads of nutrients are present at the same time, massive algal bloom can occur. 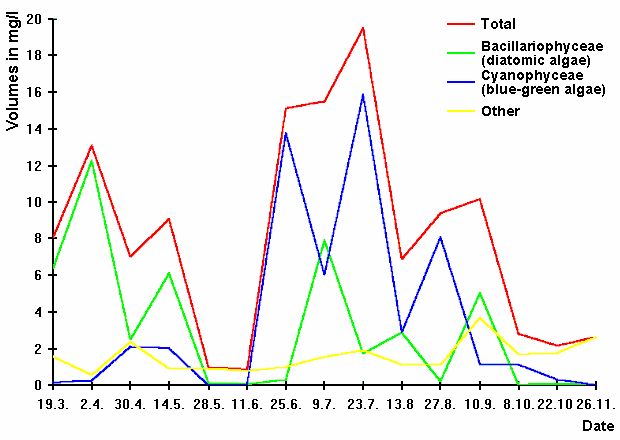 The phytoplankton minimum principally occurs in May and June and depends on many factors, such as weather, composition of algae types, and especially zooplankton structures. If the spring algae community is dominated by edible types (diatomic algae), then a mass development of zooplankton can occur which are capable of filtering great amounts of algae biomass. A high water transparency can be reached (cf. Fig. 4). This “clear water stage” is observed more frequently in the Spree, the Upper Havel and somewhat in the Lower Havel, but not in the Dahme, where thready, hardly edible blue-green algae appear as early as spring. 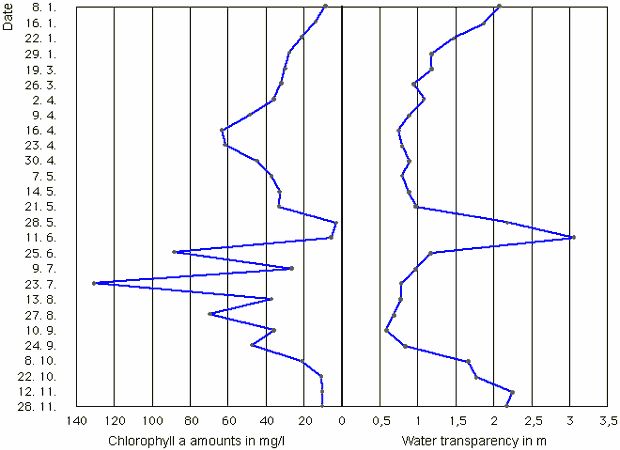 The measured values for April to September 1991 are represented in the maps. The maximum and minimum values of this period for single water sections are displayed beside the mean values. The strips depicting the average value of the months April to June and July to September reflect the development of phytoplankton in spring and high-summer. Algae development also influences the turbidity of water, so the 6th strip depicts the water transparency with the average value of the summer half-year, April to September.

Measurement values are ordered in a 7-stage evaluation scale. The value of 30 mg chlorophyll a per liter is considered as the restoration goal for Berlin waters. This value is used as the upper value of quality class 1 and 2. Quality classes 1 to 3 follow a linear graduation of measurement values. The linear graduation in quality classes 3 and 4 was not used because a of greater imprecision of measurement process at higher measuring values.