The groundwater temperature in the agglomeration of Berlin is significantly influenced by man.

Temperatures measured, in the near surface groundwater of the city center, shows that the average temperature has increased more than 2°C over the thinly populated surroundings outside the city. The evidence also indicates that long term groundwater temperatures will continue to rise. 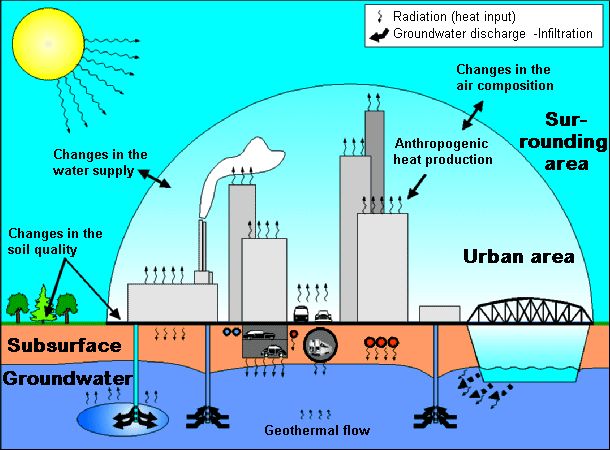 The causes for the rising temperature are varied and are directly connected with the increasing urbanization of the land. There are many influences from direct to indirect for the change in groundwater temperature (cf. Fig. 1):

In comparison to the surroundings a change of the heating regime has been caused by the above mentioned reasons. The city heats itself slowly, storing altogether more heat and gives this again slowly to the surroundings, that means it is being generally considered as a huge heat saver. In the long term this process increases the average of the air as well as soil temperature ( cf. maps of the topic 04 climate).

One hundred percent of Berlin’s drinking water comes from groundwater, which is being extracted almost exclusively from the city area. The groundwater also supplies a large percentage of the needed water for industrial uses. Therefore, the protection of the groundwater from hard changes like the raising of the groundwater temperature, is of high importance-specifically in the context of sustainable water use.

Since 1978 the deep groundwater measurements points from the entire city have been processed and evaluated to strengthen received temperature profiles that include both a chronological and spacial depiction of the groundwater fields.

The presented map should be:

Additionally it can be combined with other map topics (for example: geological, hydrological) for decision making and preplanning of an energetic management of the groundwater.

With help from heat pumps or probes the surplus heat can be used. Fossil fuels are being saved in this way, as a contribution to progressive energy politics by the reduction of harmful climate gas emissions.

The substantial heat source for the earth is Solar radiation, which is responsible for the surface temperature. The radiated solar energy warms the near surface ground and this in turn warms the atmosphere and the underground. The regular energy from the sun on the surface of the earth amounts to an average of ca. 0,75 kW/m2. Different surface types and elevations, as well as both seasonal and daily changes to the amount of sun exposure, lead to local and time deviations from the median value.

The surface temperature penetrates with decreasing intensity into the ground. The penetrated depth and the speed in which the heat is transported depends on the heat transfer ability of the ground.

During the convective heat transfer the heat movement occurs through the material (for example ground and seepage water), on the other hand the conductive transfer results from the transportation of energy through push "processes" between molecules.

There is also another form of surface heating, that comes out of the earth and passes to the surface. It is called the earth heat flow. It originates in the production of heat from the decay of radioactive isotopes. However this form of heating is much weaker than the sun.

The near surface groundwater temperature is therefore essentially caused by the exchange of heat between the sun, the earth’s surface and the atmosphere, with a much smaller amount from the earth heat flow directed at the surface.

The regional average annual temperature at the surface in Berlin, under anthropogenically unbiased conditions, is ca 8,5 to 9°C.

Daily fluctuation affect the ground only up to a depth of about 1,5 m, while seasonal fluctuations affect a depth of ca. 20 – 30 m. Below this depth the seasonal influence is no longer registered, This is the beginning of the so called neutral zone. At this point temperatures rise depending on the heat transfer ability of the rocks and the regional heat flow density (Fig. 2).

In the Berlin area the average rise in temperature in this region, until a depth of ca. 300m, is 3°C per 100m. 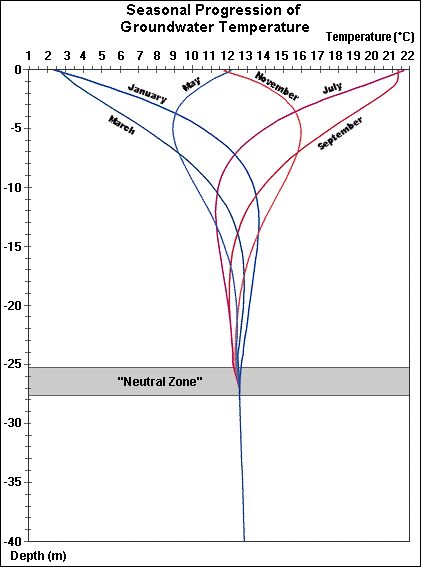 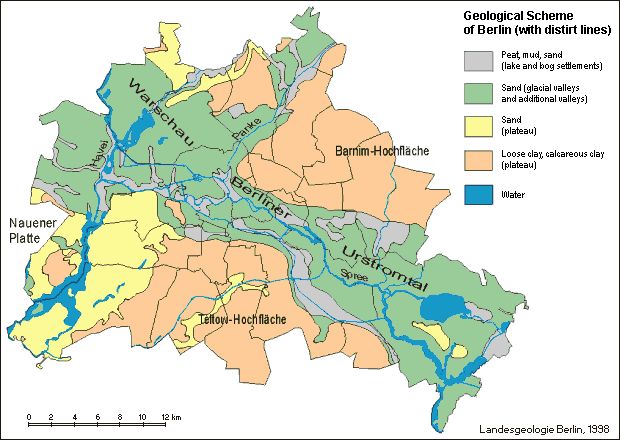 In Berlin the pore space of the predominantly sand and gravel sediments are, over 150-200 meters, completely filled with groundwater until just below the surface. This is used as the drinking water supply for the city. The distance from the groundwater to the surface fluctuates depending on the morphology and geology between 0 m and a few meters in the glacial valley as well as five to over 30 meters on the plateaus (cf. map 02.07, SenStadtUmTech 1997).

The city of Berlin has a polycentral settlement structure that is characterized by the existence of two main centers, smaller city centers and dense areas of living, green, trade and industry areas. Larger business and industrial areas normally lie on settlement and development axes directed by the city radials from the center to the outskirts as well as on canalized surface waters.

Here is a largely simplified look at the city (Fig. 4): 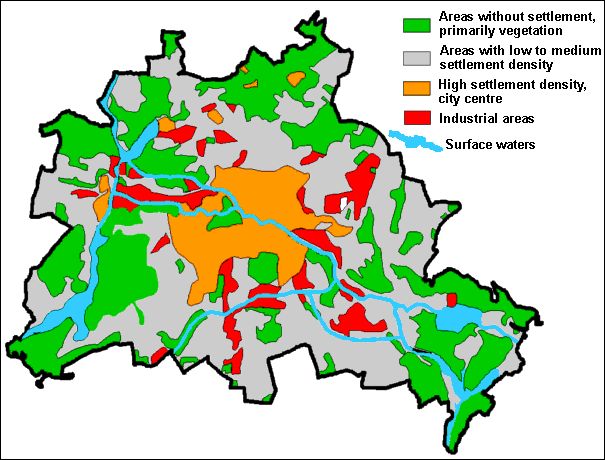 The local climatic situation in Berlin shows above all that the structurally high-condensed city center has profound changes in the heat regime compared to the surroundings. By anthropogeneous activities, energy passes as heat into the city-atmosphere. So the middle year air temperature in the outskirts (Dahlem) amounts to 8,9 °C. In comparison the average temperature in the city center is over 10 °C (cf. map 04.02, SenStadtUm 1993b).