The present edition of the map is different from the 2008 in that a considerably improved elevation model was available for the calculation of the depth to groundwater. The State of Berlin now has a high-resolution and reliable model of the surface of the terrain to serve as the basis for information on terrain elevation.

For the area of the State of Berlin, the data of the digital terrain model DTM5 with a grid interval of 5 m and a level of precision of +/- 0.5 m was used. These are the results of the evaluation of data from laser-scan aerial photography.

For the area of the State of Brandenburg, the data of the digital terrain model DTM25 with a grid interval of 25 m and a level of precision +/- 2 m was used. Since the model was available only in the system ETRS89, the grid points were transformed to the Soldner (new) system (max. error: 20 cm); subsequently, a new 5 m grid was calculated by means of the software Surfers. 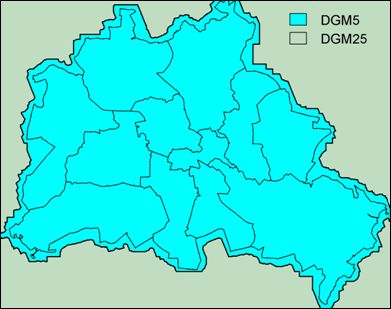 The ascertainment of groundwater levels is based on data taken from 1496 groundwater measurement sites (piezometers) of the Berlin State Groundwater Service and the Berlin Water Utility of May 2009. In addition, measurement data from the Brandenburg State Environmental Agency and water-supply companies in the areas surrounding Berlin were integrated into the process.

Areas in Berlin with confined potentiometric surfaces were investigated using the digital information on hydro-geological sections of the Geological Atlas (SenStadt 2002) of Berlin, as well as selected bores from the drilling archives (cf. Fig. 6). At these measurement points, it was not the water levels, but rather the lower surfaces of the aquitards that were ascertained digitally. Drillings and additional depth-related information from the stock of hydro-geological maps were also used for areas in the surrounding countryside in Brandenburg which are within the “Berlin Special Sheet-Lines” area (ZGI 1983).

Moreover, numerous auxiliary support points for water elevations along the surface waters were included in the determination of the regional distribution of the potentiometric surface. These points were used only in areas undisturbed by water-utility activity. In Berlin, such locations are found exclusively in the outlying areas (e.g. along the Dahme or the upper Havel). The reason for the inclusion of these support points is to avoid calculating groundwater levels above the table along these waters. Thus, even such small streams as the Große Kuhlake in the Spandau Forest or the Tegel or Neuenhagen Mill Streams (Erpe) were considered in this context.

The derivation of the two-dimensional information on groundwater confinement here described is based on the one hand on the existing invariant data on the spatial distribution of subsurface aquifers and aquitards, and on the other, on the data, which is variant in time, on the free top surface of the groundwater in areas without impeding surface layers for the near-surface groundwater. Since the level of the unconfined potentiometric surface can vary in Berlin by several decimeters, depending on the time intervals of comparison, it is also possible that there could be an area marked as “unconfined” in May 2006 which could prove to be “confined” in May 2009, and vice-versa.

For this reason, the above-mentioned analysis of the spatial distribution of groundwater confinement had to be checked with the aid of the information on the groundwater levels in May 2009, or repeated. The result is shown in Fig. 6. 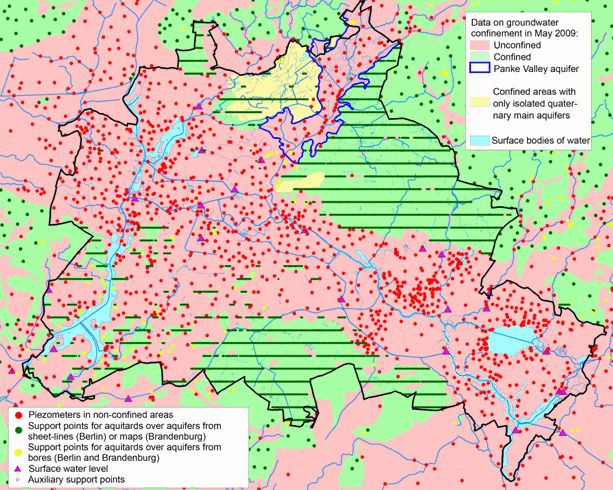 Fig. 6: Distribution of selected measurement points for the investigation of the potentiometric surface in May 2009
Image: Umweltatlas Berlin

The differences in the results of the analyses for the two time periods, in May 2006 and May 2009, are only slight, due to the fact that the groundwater levels have usually only varied by a few centimetres. Some areas which were unconfined as of 2006 and were shown as confined in 2009 can be along the southern edge of the Barnim Plateau, and also to the south, at the northern edge area of the Teltow Plateau. In the area of the Panke Valley as well as the “Confined areas with only isolated quaternary main aquifers”, the State Geological Survey undertook extensive spatial modifications in recent years, so that no direct comparison with the time period around May 2006 is any longer possible here.