Green and open spaces are defined as non- or minimally built-up areas, such as woods, fields, allotment gardens, sports areas, parks, cemeteries and fallow areas. They are of great importance for the quality of life within a city. The existence of a variety of open spaces, from near-residential parks up to farmland and wooded areas, is a key prerequisite for the fulfilment of the needs of residents for relaxation.

Green and open spaces enrich the urban features by their contribution to the residential structure of a city. They serve as habitats and retreats for plants and animals, and fulfil important compensatory functions for the urban ecosystem. They improve the urban climate by promoting air circulation and air exchange, and moderating warming. They relieve surface waters by retaining and permitting the evaporation of rainwater.
As areas that are largely pervious, they enable undisturbed soil life, with all the ensuing effects for the ecological balance. The soil is a decomposition, compensation, and construction medium for processes of material transformation; its filtration, buffering, and metabolic qualities also serve, particularly, the protection of the groundwater. Increased impervious soil coverage and substance input into the soil may destroy its functions permanently or even irreversibly.

In the context of the environmental discourse, there is a great need for a basis to assess the extent of land consumption, and its developments during recent decades. Balances regarding land consumption are needed both to define quality goals for soil protection, and as indicators for the discourse on sustainability. In particular, the aim is to reduce land consumption and to monitor the development over time. Its continuous observation also serves as an indicator with regard to sustainable development at federal, state or municipal level.

According to the Federal Statistical Office, which uses the only figures available for a nationwide comparison from the statistical offices of the German states, a continuous increase in residential and traffic areas to 130 hectares per day could be observed in Germany up to the turn of the millennium. It is important to note that the residential area category does not only include impervious but also pervious open and green spaces in the city, such as parks, campsites, cemeteries and playgrounds, and even gardens and front yards, which are categorised as buildings. Land consumption, primarily at the expense of farmland and forest, dropped to 99 hectares per day in 2003, only to increase to 131 hectares per day again in 2004. Since then, land consumption decreased to 77 ha per day in 2010 and to 45 ha in 2019 (German Environment Agency (UBA) 2020). The Federal Government’s goal in the German Sustainable Development Strategy is to limit the average increase to under 30 ha per day by the year 2030. By 2050, the aim is to establish a closed-loop land-use regime, which means that the total land consumption is reduced to net zero by land recycling and by reducing new land consumption (cf. Federal Statistical Office 2021).

Figures on the development of residential and traffic areas are also available for Berlin. The Statistical Office for Berlin-Brandenburg (AfS) regularly publishes figures on the municipal area, broken down by borough and type of use, and compiles them together with information on the residential and traffic areas. The figures are based on the evaluation of the real estate cadastres in the borough land survey offices. Up until 2015 (inclusive), the data was supplied based on the AdV (Working Committee of the Surveying Authorities of the Laender of the Federal Republic of Germany) – land use directory. Since 2016, the data is generated by evaluating the Official Real Estate Cadastre Information System (ALKIS) (Amt für Statistik Berlin-Brandenburg 2020b). 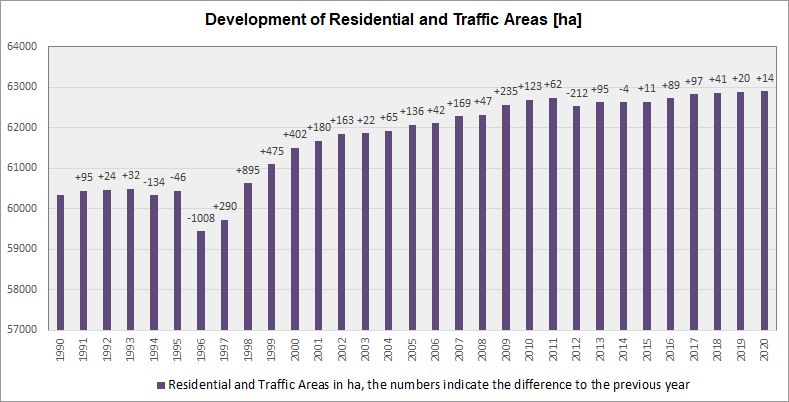 As described above, urban green uses may also fall into the categories of residential and traffic areas. The figures of the official statistics on residential and traffic areas are therefore only suitable for providing insight into the development of land used for residential purposes and its associated green uses. Regarding the development of residential and traffic areas, the analysis of the official land use statistics only quantifies the consumption of forest areas and farmland, although detailed figures are also available for inner-city green uses and calculations would be possible. For non-city states or for Germany as a whole, such figures may be suitable for describing the land consumption of these use categories. Since successfully and permanently harmonising the methodology throughout Germany based on ALKIS data, the foundations for appropriate monitoring have been created.

For the State of Berlin, reducing the open space uses to “Forest” and “Farmland” is not a suitable solution to representing the use of green and open spaces. Since forest areas are largely protected, land consumption would thus be limited to decreases in farmland. With regard to the above-mentioned important functions of all green and open spaces, it is necessary to monitor any loss of green and open spaces as well as any gains in their entire range, i.e. including allotment gardens, fallow areas, greenery along roads, cemeteries and parks as well as larger contiguous green spaces on areas associated with construction use. For this reason, a comprehensive basis for monitoring the entire green and open space inventory, consisting of the open-space development map data, has been developed and published as part of the Environmental Atlas for more than three decades.

The two approaches to ascertaining land consumption differ greatly in their objectives and their methodologies. This becomes apparent in a comparison of the land use categories they employ. Table 1 presents the land use categories of the Environmental Atlas’ open-space development map on the one hand and the data on the development of residential and traffic areas according to the Statistical Offices of the Federation and the Länder (Statistical Office for Berlin-Brandenburg) on the other. The table lists land-use categories that are grouped as construction use or residential areas on the one hand and green or open-space use on the other. It only includes categories for which statistical evaluations are also available. 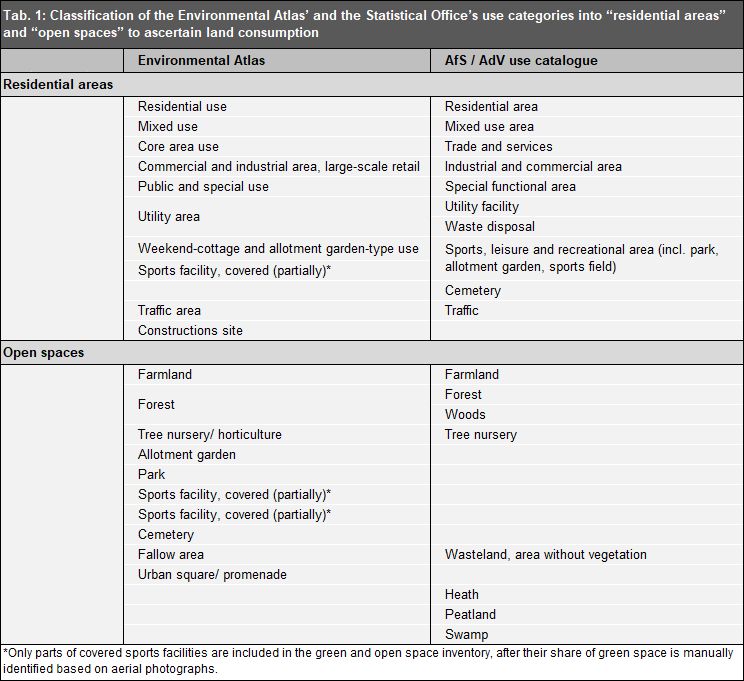 The table illustrates the fundamentally different classifications of the two approaches, especially with regard to the open space categories.

According to the Environmental Atlas approach, all areas, which have been assigned to an “open space” use category listed in Table 1, are regarded as open spaces. This applies regardless of whether dual use applies for the area according to the use mapping of the Urban and Environment Information System (ISU), i.e. simultaneous construction use and green use or not (cf. Environmental Atlas maps “Actual Use of Built-up Areas” (06.01) and “Inventory of Green and Open Spaces” (06.02)).

In a metropolitan area like Berlin, the increase in residential and traffic areas according to Federal and State statistics is therefore not a suitable indicator for the consumption of open space. For this reason, the indicator “soil imperviousness” was defined as part of 40 core indicators for Berlin, for the purpose of sustainability monitoring. It aims at documenting the economical use of the resource soil in the context of sustainability. Data from the Environmental Atlas (Statistical Office for Berlin-Brandenburg 2021) is also used to illustrate how the degree of imperviousness develops over time.

The indicator of soil imperviousness, however, is equally unsuitable for drawing direct conclusions about the development of green and open spaces in Berlin. Thus, the Environmental Atlas provides the only continuously updated basis for such monitoring, its open-space development map, which has been published since the mid-1980s.
To grasp the methodological approach that is outlined later, it is crucial to understand the definition that the term “open space” is based on here and its limits in terms of representation.

Green and open spaces may be assigned to economic use (e.g. agriculture), horticulturally designed as recreational areas (e.g. parks) or largely unused (fallow areas with or without spontaneous vegetation). Typical green and open space uses include forests, farmland, meadows and pastures, but also urban open spaces such as parks, allotment gardens, cemeteries or sports facilities as well as fallow areas. Urban open space uses are thus also classified as open spaces rather than residential and traffic areas, which differs from the use system employed by the Statistical Office for Berlin-Brandenburg.

The green and open space inventory as a whole includes larger contiguous areas of the city’s green potential, which do or may potentially serve as unique habitats for animals and plants and fulfil recreational, landscape and abiotic functions in the ecosystem.

The level of detail of the areas presented in the open-space development map is based on the level of blocks and block segment-areas of the Environmental Atlas’ use maps. The specification of a minimum area size of about 1 ha leads to a generalised representation, which always allows the key areas of urban development to be located and interpreted. The Environmental Atlas provides additional datasets (“Urban structure – Area Types Differentiated” (06.08), “Impervious Soil Coverage” (01.02), “Vegetation Heights” (06.10.2) and “Green Volume” (05.09)) that provide insight even on a smaller scale, i.e. below the 1 ha limit. This includes insight into the green structure within residential and commercial areas or into the parts of construction use/ green and open space use areas that are actually impervious.

The reason for presenting open space losses at longer time intervals, i.e. every decade for periods since 1970, is that more frequent presentations – e.g. on an annual basis – would require a disproportionate amount of effort.