The penetration depth of seasonal temperature fluctuations, and hence the depth position of the neutral zone (NZ), is determined by such geogenic factors as the depth to groundwater, the thermal conductivity and heat capacity of the rocks, and the formation of new groundwater. In Berlin, the neutral zone is located at depths between approx. 15 and a maximum of 25 m, depending on the conditions mentioned above (Henning & Limberg 2012).

Fig. 5: Seasonal Change of Temperature of the Subsoil in the Groundwater Saturated and Unsaturated Soil Zone, i.e. above and below the groundwater level.
Image: Umweltatlas Berlin

Fig. 5 shows the variation over time of the temperature progression for three special temperature measurement points for different urban climatic zones, in the first 40 m under the terrain surface, in groundwater saturated and unsaturated subsoil. The depth to groundwater amounts is 5 to 10 m.

Depending on the location of the groundwater measurement point, considerable differences can be seen in the observed temperatures, as well as in the temperature progression at increasing depth below the neutral zone, between 10 and approx. 15 m below terrain surface.

In the near-surface area (< 5 m depth), the lowest subsoil temperatures as a rule appear in the spring (February through May), and the highest in the autumn (September through October).

Table 1 shows a tabular overview comparing the key temperature values obtained from the above measurement points during the observation period of February 2008 through March 2010 (Henning & Limberg 2012). 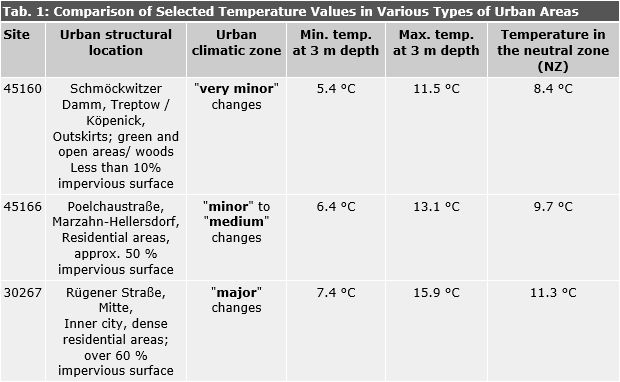 Table 1 shows that in general, with increasing density of structures, as expressed by the urban structural location, an increase in groundwater temperature in the neutral zone (NZ) (cf. Fig. 5) can be ascertained.

As a result, the following categorization of residential areas can be made (Tab. 2):

Figure 6 shows an extreme example for a temperature progression in the middle of a dense industrial park with several major waste heat producers. Moreover, in the immediate proximity, there is a surface body of water (the Spree). The highest groundwater temperatures can be found in winter, and the lowest in summer. Since the surface waters are warmed strongly by the input of cooling water, particularly during the winter months, the groundwater temperature also rises, particularly due to infiltrating surface water. In 1991, a temperature anomaly with seasonal temperature fluctuations throughout the entire year of only about 1 K, between approx. 14.5 and approx. 15.5°C, was observed at depths of between 10 and 20 m below the surface. 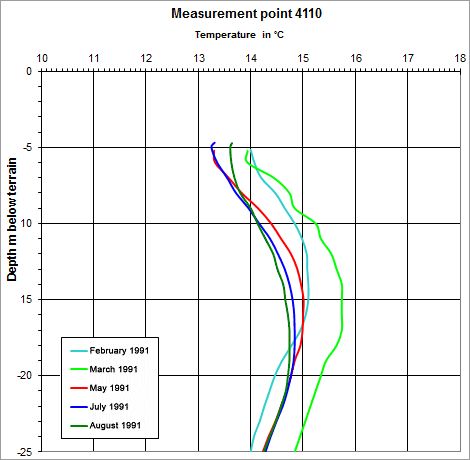 Fig. 6: Seasonal Temperature Fluctuations of the Groundwater at Measurement Point 4110, Wiesendamm in Spandau in the area of a dense industrial settlement with several large producers of waste heat and in the catchment area of the Spree.
Image: Umweltatlas Berlin

In Figure 7, the temperature profiles of 5 selected measurement points in the borough of Mitte are shown for an area of approx. 3 × 3 km, with data obtained in 2012/13. The figure shows a clear effect on the underground temperature to a depth of more than 100 m below terrain surface. The measured temperatures range between 11 and 15°C. The measurement point showing the greatest influence on the temperature is located near a surface body of water (between Spree and Kupfergraben, the purple line in Figure 7). 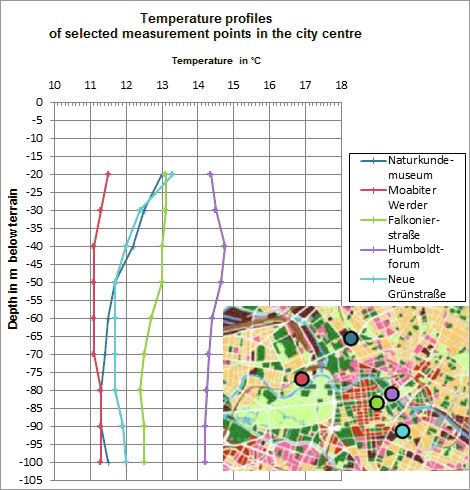 The evaluation of a long-term investigation at measurement points in the inner-city area have, according to Henning Energie- und Umweltberatung (2010), showed that even over the long term, an effect on groundwater temperatures at great depths must be assumed. Figure 8 shows this clearly using the example of temperature profiles recorded at a groundwater measurement point at various points in time. 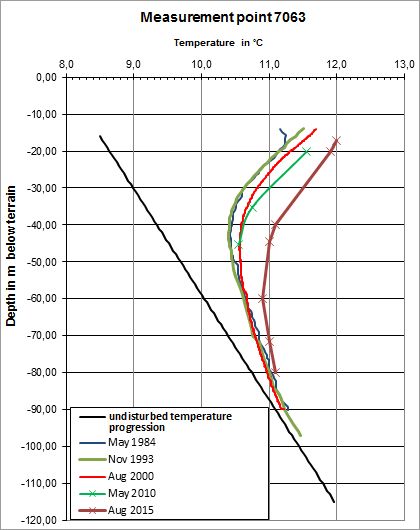 An additional temperature rise of approx. 0.7 K could be observed in the neutral zone between 1993 and 2015; it can currently be ascertained to depths of approx. 80 m. Since in this case, there were no significant changes, such as construction / surface sealing, in the area around the measurement point during this time period, which could have caused changes in the local climate, there is probably a connection with the effects of general climate warming. 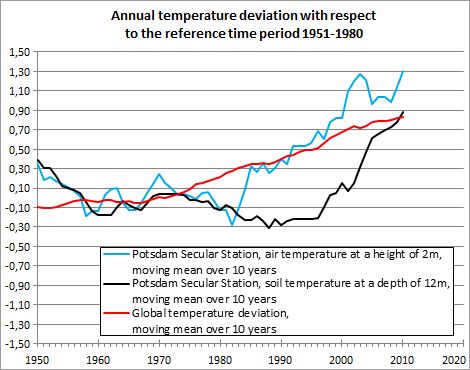 Fig. 9: Temperature Deviation of the Air Temperature and the Soil Temperatures at a Depth of 12 m at the Potsdam Secular Station, by Comparison with the Global Temperature Progression, with Reference to the Period 1951-1980.
Image: Umweltatlas Berlin

Figure 9 shows that since the beginning of the 1980s, a clear rise in air temperatures has been observable in the state of Berlin and surrounding areas, as has been the case at a global level (red line). This temperature rise of approx. 0.5 K in 1995 and of more than 0.8 K in 2010 leads to a noticeable disturbance of the temperature balance in the near-surface subsoil, which can also be observed below the neutral zone at numerous measurement points in the state of Berlin. One example for this is shown in Figure 10. 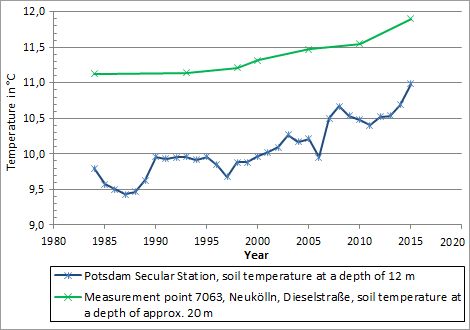 For the State of Berlin, the maps show the temperature distribution in the subsoil for five different depths for the reference horizons 20 m, 40 m, 60 m, 80 m and 100 m below terrain surface and the average temperatures for the depth ranges 0 m to 50 m and 0 m to 100 m. It should be taken into account that the results shown represent the temperature distribution not as point-referenced information, but rather as a tendency, since the isothermal contours may be subject to relatively large uncertainties, depending on the density of available measurement points. The continuous isotherms are regarded as relatively certain, whereas the dashed isotherms are to be regarded as "conjectured".

The map information on temperature distribution should always be used in cases where no representative temperature measurements exist for the site. It should be taken into account that the results of a temperature measurement only apply precisely for the depth profile ascertained. Depending on the variability of the site characteristics, other conditions may well prevail only a few hundred meters away which could lead to changes in the temperature of the subsoil. Without taking these changes into account, a transfer of information even to a site very close to the measurement point could lead to considerable false assessments of temperature conditions.

Temperatures 20 m below the terrain surface

Basically, though, an initial estimate of temperature conditions at a site which can be used for geothermal energy is possible on the basis of the present maps.

Generally, a tendency towards higher temperatures from the outskirts to the city centre can be observed. The temperature progression shows a continuous increase from the northeast toward the city centre, while in the other areas of the city, the appearance of several smaller positive and negative temperature anomalies is characteristic.

The densely built-up city centre with its highly impervious surface is enclosed by an 11.5 °C contour line 20 m below terrain surface (Map 02.14.1). The heat island with temperatures of more than 12.5 °C which is apparent in the city centre is interrupted by the Great Tiergarten, a large green space in the centre of the city. Within this heat island, temperatures anomalies greater than 13.5 °C can be observed.

Outside of the city centre, too, positive temperature anomalies correlate with highly impervious areas, such as secondary centres and industrial areas.

Below the extensive woodlands on the outskirts to the southeast, the north, the northwest and the southwest as well as in the area of the Grunewald, the temperatures are in the range below 10.5 °C. The temperature anomalies observed in the past, with less than 10.5 °C in the municipal area, e.g. the Britz Gardens, or the Tempelhof Field, both areas with a high proportion of vegetation, do not occur in the current map. This is partly due to the considerably lower density of measurement points. In this case, no measurements were carried out in the catchment area of these two areas.

Groundwater temperatures in the densely populated inner-city area are generally more than 4 K higher than in the open countryside.

The other maps (02.14.3 – 02.14.6) show the groundwater temperature distribution for the reference horizons 40 m, 60 m, 80 m and 100 m below terrain surface in the State of Berlin. At these depths continuous, partly anthropogenic temperature variations which e.g. are caused by a changed structural development or climatic changes can, however, manifest themselves in the long run.

Such temperature anomalies can be observed particularly in the inner-city areas in the borough of Mitte, but also at the southern edge of the city in the Lichterfelde neighbourhood at the Teltow Canal, with its long-term building use and its intensive industrial utilization (groundwater temperature distribution for the reference horizons of 80 m and 100 m).

Other temperature anomalies, such as those in the south-western part of Berlin at the border with Potsdam, in the northern portion of the Grunewald forest in the area of the natural gas storage area, and in Lübars, at the northern border of Berlin, are caused by geological structures in the deeper subsoil. These temperature anomalies are assumed to be connected with the salt dome structures in the deep subsoil that are known to exist in the Berlin area.

The current map does not exhibit the temperature anomalies that occurred in the 2014 edition in the deep subsoil more than 80 m below terrain surface, such as in the Rudow/Altglienicke area in south-eastern Berlin, in the Lichtenberg, Marzahn und Hellersdorf neighbourhoods in the east of the city. Here, too, the reason lies in the missing measurements. The temperature statements in these areas still involve relatively great uncertainties.

As a supplement to the maps for the groundwater temperature distribution for the different reference horizons, two maps were additionally compiled for the average temperatures in the depth ranges 0 m to 50 m and 0 m to 100 m. The two maps also serve as an aid for estimating the specific power of ground heat exchangers.

In summary, it can be ascertained that groundwater temperature increases in the densely populated inner-city area of more than 4 K compared with the open countryside can occur, which thus constitutes a considerable degree of warming. There is a clear connection with urban climatic conditions at the surface. The results of regular investigations at selected special temperature measurement points in locations of varying urban structures also confirm this.

Overall, the near-surface groundwater temperature distribution in the State of Berlin generally shows a connection with the distribution of industrial facilities, major buildings, waste heat producers, impervious surfaces, open spaces and surface waters warmed due to anthropogenic activity (see also Henning 1990). Taking the groundwater flow field into consideration, it can be assumed that these factors have a substantial influence on the change in groundwater temperature. Since there is generally an overlapping of such factors in the city, these quanta are mutually reinforcing.

On basis of data from long-term investigations, it can be shown that due to progressive structural development and also to general climate change, a further very considerable warming of the near-surface (< 20 m depth), and also in the deeper subsoil (to 100 m depth) subsoil, and hence also of the groundwater, can be assumed.