The level of the groundwater surface and the groundwater piezometric surface is relevant to various issues in water management, ecology and structural engineering. This is especially true for its maximum value, the highest value that the groundwater level can reach, which is primarily needed for designing buildings. This value is indispensable as a basis for planning and designing how to waterproof a building against water under pressure or for dimensioning its foundations. 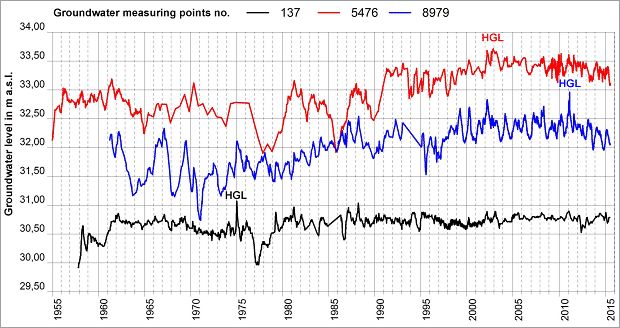 In many cases, knowing the highest groundwater level that occurred in the past is very useful but not always fully satisfactory or sufficient. For instance, if the HGL is to be used for measurements in waterproofing a building against water under pressure, this value observed in the past must of course also not be exceeded in the future, i.e. within the useful life of the building, and must occur only in extremely wet situations. If the observed history of the groundwater level is essentially determined by natural causes (seasonal differences in new groundwater formation, alternation of years with low and high precipitation), it can be assumed to behave similarly in the future. This also applies in the case of anthropogenic interventions with consequences for the groundwater surface, if these are permanent and will thus not change in the future.

In large parts of Berlin, groundwater conditions have not been natural for a long time. The level of the groundwater surface is subject to artificial influence due to both permanent and temporary interventions in the groundwater balance.

Temporary measures and those that may vary considerably in their impact include:

This multitude of potential artificial measures that affect the groundwater illustrates that in some cases it is difficult even for specialists to judge whether and to what extent an observed (= measured) highest groundwater level (HGL) is anthropogenically influenced and whether such a value can also be used for addressing future issues.

In order to further increase the quality of the HGL value and to make it more readily available to the user, a map has been developed that directly specifies the “expected highest groundwater level”, abbreviated “EHGL”. This is defined as follows:

The expected highest groundwater level (EHGL) is the maximum that can arise due to weather effects. It can occur after extremely wet periods if the groundwater level is neither lowered nor raised by artificial interventions in the vicinity.

According to this definition and current knowledge, this groundwater level will not be exceeded after very heavy precipitation events if the following geohydraulic conditions apply: the natural conditions (e.g. water permeability of the subsoil) on the one hand and the permanently artificially modified conditions (e.g. impoundments of the watercourses, see above) on the other hand.

Groundwater levels higher than the EHGL can theoretically occur, but only as a result of further artificial interventions. Of course, such interventions (e.g. discharges into the groundwater) are not predictable in the long term. However, they do not need to be taken into account for most questions, as they require permission or approval from the water authorities.

In this context, it should also be noted that the responsibility of determining design groundwater levels for construction measures generally lies with the constructor or their specialised planner or surveyor. In some cases, individuals are unable to determine these by themselves, or only with great effort, based on groundwater investigations at the construction site or in its immediate vicinity only. Berlin’s groundwater conditions are extremely complex and strongly influenced by humans; therefore, the State of Berlin is sharing groundwater level information with the public.

The Geological Survey working group (“Landesgeologie”) of the Senate Department for the Environment, Urban Mobility, Consumer Protection and Climate Action has been providing information on the groundwater for decades, including the highest groundwater level (HGL), which is determined by specialists on the basis of the available groundwater level data. As the HGL, according to its definition (see above), is not necessarily an uninfluenced groundwater level, the aim is to develop a city-wide map of the EHGL, which is more conclusive regarding future matters (e.g. waterproofing of buildings). Accessing the map through the Internet allows the user to obtain the EHGL for their site of interest. Thus, waiting periods previously caused by written inquiries can be avoided.

The EHGL map is available for four areas of Berlin (see Figure 2). 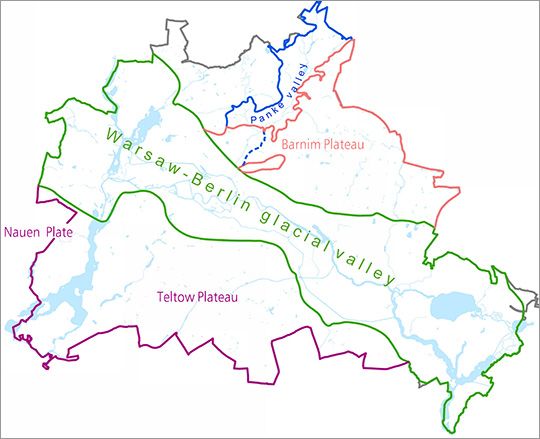