All information about actual land use is managed and processed at the ISU (Informationssystem Stadt und Umwelt: Urban and Environmental Information System). This makes possible a graphic data processing of the factual data on basis of a uniform spatial reference system.

The spatial reference system (edition 2007) is provided by the Block Map, 1:5000 – the Urban and Environmental Information System (ISU5), which is in turn based on the Block Map of the Statistical Office of Berlin-Brandenburg (AfS). Each statistical block is as a rule delimited by streets. The numbering and the limitation of blocks is handled by the AfS.

Some 13,000 of these areas correspond to the statistical units of the Office of Statistics, while some 3000, mainly large and vacant blocks from the AfS map, have been subdivided into some 12,000 ISU block segments.

The uniform reference system makes possible a clear spatial identification of all factual data. By means of a common key, which contains, among other things, borough, block and block segment numbers, these data are assigned to the spatial reference system.

The Environmental Atlas Map 06.01 Actual Use of Built-Up Areas and 06.02 Inventory of Green and Open Space, record the actual land use in Berlin on the basis of 22 different categories, which are described in greater detail in the following sections. The procedure for the determination of the various land use categories is detailed in the report which documents the mapping unit and the updating of the database. 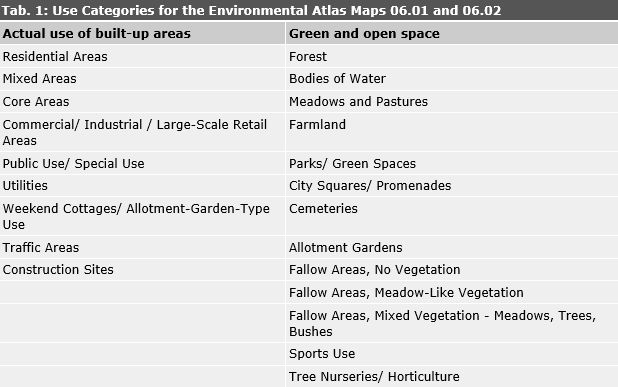 Tab. 1: Use Categories for the Environmental Atlas Maps 06.01 and 06.02
Image: Umweltatlas Berlin

The Maps 06.01 Actual Use of Built-Up Areas and 06.02 Inventory of Green and Open Space together constitute a comprehensive representation of actual land use.

For Public / Special Uses, Utilities Areas, Commercial / Industrial Uses, Mixed Uses with commercial character and Traffic Areas, it is possible to simultaneously map certain of green and open space use categories, in order to also permit ascertainment of any unusual vegetation-determined character of certain areas. Thus, in addition to their actual use, these areas are also characterized in terms of the type of their vegetation cover. As a result, for some areas with these uses, there is an overlap – so-called dual use1 – of the two maps. For other uses, no dual use is allowed, since building use by definition, due to its high intensity, either excludes green use (e.g., core area use), or else may intrinsically include a large green or open space share (e.g., Weekend Cottages and Allotment Gardens).

Examples of the application of dual use include:

Since in many applications, only one piece of usage per area can or should be processed, it is necessary to aggregate the information of the two use mapping procedures in order to have only one piece of usage information per area throughout. For most applications in the environment area, green and open space usage is of particular interest, since this is the dominant feature of the ecological nature of an area (e.g., vegetation structure and evaporation behaviour). Other applications, however, are more interested in building use (e.g., when comparing the actual-use profiles for a proposed land use plan, or in assessing the impact of the effects of noise on people). Therefore, beginning in 2010 the use is additionally represented in the two maps Actual Use (06.01.1) and Actual Use and Vegetation Cover (06.02.01), in which both the uses of Map 06.01 and those of Map 06.02 are shown together. In Map 06.01.1, in case of dual use (currently about 1600 cases), the construction use is shown, i.e. the presentation exhibits construction priority. By contrast, in Map 06.02.1 the presentation exhibits green priority, i.e., in case of dual use, green and open space use is shown. Since when drawing a balance of the shares of the city’s territory occupied by the categories, each category can be taken into account only once, this procedure ensures that the area share can be calculated separately, depending on the goals of a particular assessment.

Updating the Geometry and Usage Data

In addition to the primary updating process in the context of the update of Block Map 1:5000 (ISU5) of Berlin, the focus of the continuation of the 2011 Edition was on the research and analysis of digital data collected by the sections of the Senate Department for Urban Development in other contexts, by means of which a more extensive, semi-automated update and review of the entire data set could be accomplished. In this context, the mapping units of both the actual-use and the urban-structure mapping processes were subjected to a revision, and some adjustments or clarifications were made. Moreover, the rules on the admissibility of combinations of various land uses and types of areas have been revised, and, based on these rules, plausibility checks implemented for the entire data base.

The block boundary changes carried out between 2005 and 2010, including the current area key of the Berlin-Brandenburg Office of Statistics, have been adopted into the geometry of the ISU5. For all newly created blocks, and for the area monitoring areas (SenStadt Dept. I), a use mapping procedure was carried out with the aid of aerial photography and other documents (see Statistical Base). In this process, a further subdivision of the block areas into homogeneous-use block segments was implemented, corresponding to the presentation in the land-use and area-type system of the Environmental Atlas.

There were also correction areas, where “random observations”, e.g., during examinations of adjacent areas, local inspections, analysis of aerial photography or local knowledge on the part of persons involved, etc. had revealed that the land use had changed.

Revision of the mapping units and the classification methods

The descriptions of the mapping units were subjected to detailed examination and in some cases adapted to the changed data bases. Thus, for example, several mapping units were merged, since no distinction was any longer possible using the current data base,2 or their differentiation no longer seemed useful for some other reason.3 Certain mapping units which still distinguished between the former eastern and western parts of the city have now either been merged to form uniform categories, or have been re-mapped. In this process, two use categories of built-up areas and six categories of green and open spaces have been abolished and completely reassigned to different categories.

Plausibility checks were performed using a database analysis, in which areas with unacceptable combinations of land uses and area types were identified and reviewed. In addition, there has been an evaluation of various spatial data bases that have in recent years been compiled in the Senate Department for Urban Development for a variety of specialized tasks. These data bases were either already available as ISU block data, or they could be merged and compared with the information of the ISU map, and thus provided indications of particular cases in which the use data needed to be examined.

In addition, all areas categorized in the 2008 Edition as Fallows or Construction Sites were subjected to a check, because they were subject to greater change dynamics with respect to structure and vegetation.

Scope of the update

In the current update, 6,239 areas were checked. Of these, 5,010 received a new use assignment. The review included a total of some 23 % of the area of Berlin.

A detailed documentation, which contains not only the report on the current continuation of the real use and urban structure mapping, but also a representation of the conceptual basis, mapping instructions, and a comprehensive description of all mapping units, can be downloaded at the following link:

2 For example, the categories Mixed Areas with Predominantly Commercial and Service Use, and with Primarily Manufacturing Use were merged for this reason.

3 For example, the use category “camping sites”, which had a very small number of areas, was reassigned to the Public/ Special Use category; and also the various forest use categories, including Fallows with Forest-Like Vegetation, were merged to form a single area use category.