The penetration depth of the seasonal temperature fluctuations, and hence the depth of the neutral zone, is largely determined by geogenic factors. These include depth to the water table, the thermal conductivity and heat capacity of rocks, and the formation of new groundwater. In Berlin, the neutral zone is located at a depth of between approx. 15 and 20 m, depending on the conditions mentioned above (Henning & Limberg 2012).

Fig. 6 illustrates how temperatures develop over time in the first 25 m below terrain surface in the unsaturated zone and the groundwater-saturated zone for three temperature measurement points in different urban climatic zones. For each measurement point, 6 measurements are displayed from the year 2020. The colour intensity increases as the year progresses. The measurements are usually carried out in February, April, June, August, October and December. The depth to the water table ranges between 5 and 20 m, depending on the geomorphological position. 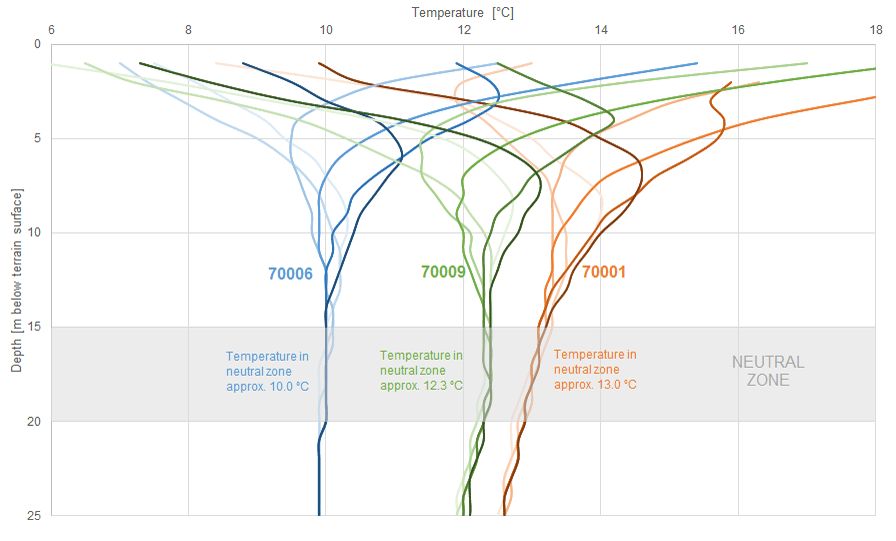 Depending on the location of the groundwater measurement point, considerable differences can be seen in the observed temperatures, as well as in the temperature development at increasing depths below terrain surface. In the near-surface area (< 5 m depth), the* lowest subsoil temperatures* generally occur in spring (February to May), whereas the highest temperatures occur in autumn (September to October).

Table 1 compares characteristic values of temperature in a tabular overview, based on measurements recorded during the observation period from January 2020 to December 2020 (Henning & Limberg 2012) for the measurement points presented above.

Tab. 1: Comparison of selected characteristic values of temperature, recorded at temperature measurement points in various types of urban areas in the year 2020

Table 1 shows that with an increasing structural density, represented by “location in urban structure”, the groundwater temperatures in the neutral zone generally also increase (cf. Fig. 6).

Based on the available temperature maps (cf. Table 2), a rough temperature range can be derived for different settlement areas and different points in time. It is evident that all areas have experienced a rise in temperature over the period studied

Tab. 2: Temperature development in the neutral zone, depending on various

The analysis of long-term investigations carried out at measurement points in the inner city indicates that groundwater temperatures will likely be influenced also at greater depths in the long run. Figure 7 illustrates this using the example of temperature profiles, which were recorded at a groundwater measurement point between 1984 and 2021. 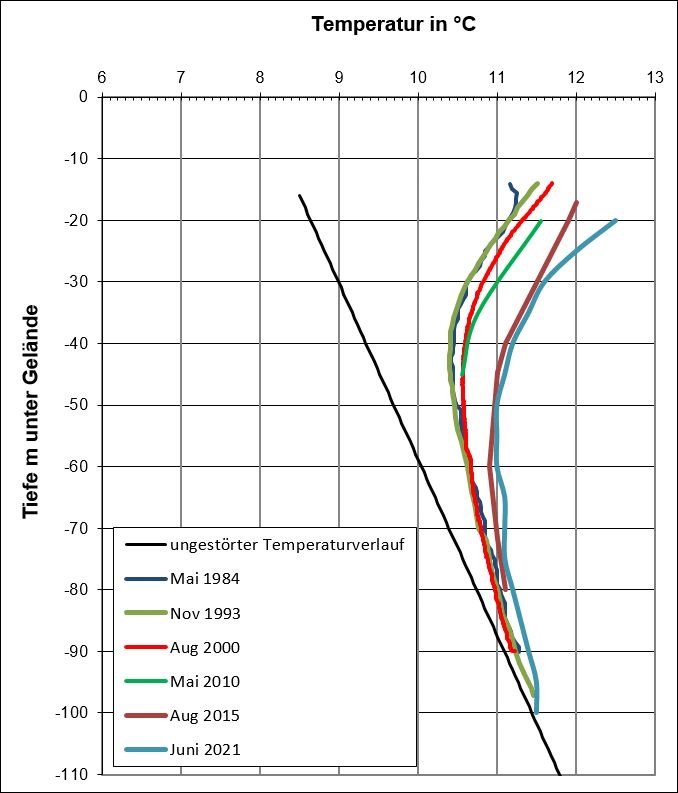 The temperature profiles recorded in 1984 and 1993 exhibit roughly the same temperature development from a depth of approx. 20 m. Subsequent measurements in 2000, 2010, 2015 and 2021 indicate an increase in near-surface temperatures, which decrease as depths increase.

The measurements from 2015 and 2021 show a further increase in temperature. This temperature increase may be observed down to depths of around 80 m.

During this period, no major changes were observed in the vicinity of the measuring point, e.g., due to building development/ impervious soil coverage, which could have affected the local climate. Hence, it seems likely that this increase is connected to the effects of the global climate change. 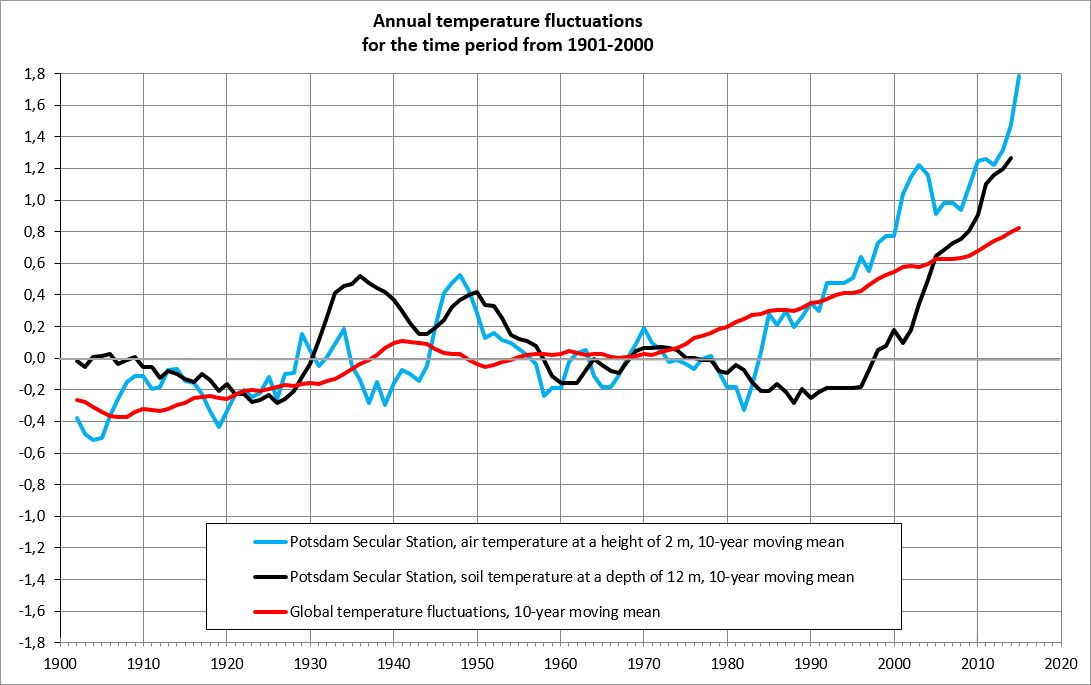 Fig. 8: Air and soil temperature fluctuations at a depth of 12 m at the Potsdam Secular Station, compared with the global temperature development for the period from 1901 to 2001
Image: SenUVK 2021

Figure 8 reveals that, since the beginning of the 1980s, there has been a clear increase in air temperatures in the State of Berlin and its surrounding areas, as well as at a global level (red line). As a consequence of this temperature increase, about 0.5 K in 1995 and more than 0.8 K in 2010, the temperature balance in the near-surface subsoil is noticeably disrupted. This may also be observed at numerous measuring points below the neutral zone in the State of Berlin, an example of which is presented in Figure 9. In the period between 1984 and 2019, the soil temperature rose by approx. 1.4 K at a depth of 12 m in Potsdam (blue line). At groundwater measurement point 7063 (green line) in Berlin Neukölln, the temperature also rose by 1.4 K at a depth of 20 m in the reference period from 1984 to 2021. Soil temperature measurements at a depth of 12 m were discontinued at the Potsdam Secular Station in 2019. 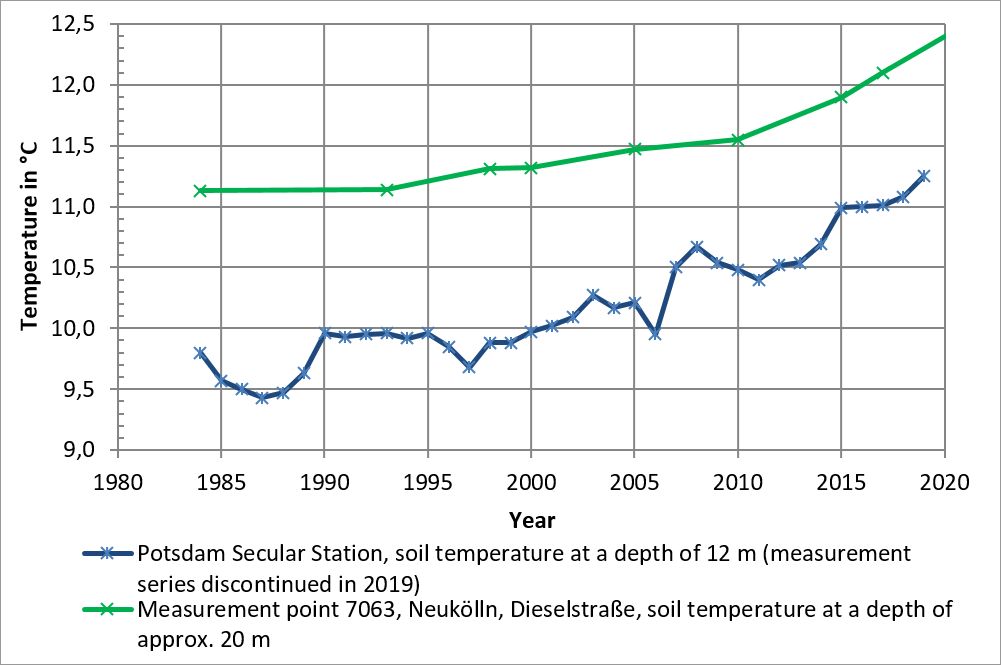 Fig. 9: Soil temperature development at the Potsdam Secular Station at a depth of 12 m and at measurement point 7063 in the borough of Neukölln Dieselstraße, at a depth of 20 m, between 1984 and 2021
Image: SenUVK 2021

The maps present the temperature distribution in the subsoil for five different depths, i.e. the reference horizons 20 m, 40 m, 60 m, 80 m and 100 m below terrain surface in the State of Berlin. They also show the average temperatures for depths from 0 m to 50 m and 0 m to 100 m. It should be noted that the isothermal lines may be rather inaccurate, depending on the density of the existing measuring points.

The map information on temperature distribution should be used in cases where no representative temperature measurements are available for the site. It should be noted that the results of a temperature measurement apply to the recorded depth profile only. Depending on the variability of the site characteristics, other conditions may well prevail only a few hundred metres away, which could lead to changes in the temperature of the subsoil. Without taking these changes into account, applying the data even to a site very close to the measurement point could seriously distort the assessments of temperature conditions. In general, however, the maps presented may be used to obtain initial insight into the temperature conditions of a site and its potential use for geothermal energy.

The influence of bank filtrate in the vicinity of multiple well galleries of the Belin waterworks (Berliner Wasserbetriebe) on the near-surface temperature field was found to be substantial. Due to seasonal temperature fluctuations of the surface waters, measuring points located between production wells and surface waters are particularly influenced. For this reason, these measurements were disregarded during map development.

The current temperature distribution (measurements from 2020) shows considerable differences compared with the previous edition of the map from 2015 for the reference horizon 20 m below terrain surface (Map 02.14.1). This is due to the fact that a lot more measuring points, especially in the east of the city area, were used to determine the temperature distribution, among other things.

A contour line of 12.5°C encircles the densely built-up city centre with its highly impervious surfaces 20 m below terrain surface (Map 02.14.1). The heat island located in the city centre has temperatures of more than 12.5°C and is interrupted by the Großer Tiergarten, a large green space in the centre of the city. Temperature anomalies exceeding temperatures of 14.5°C may be observed within this heat island.

Outside of the city centre, positive temperature anomalies also correlate with highly impervious areas, such as secondary centres and industrial areas.

Below the extensive woodlands in the south-eastern, northern and north-western outskirts of the city, as well as in the Grunewald area, temperatures are below 10.5 °C. Some temperature anomalies with less than 11.5°C occur in the urban area, such as the Britzer Garten, Tempelhofer Feld or Jungfernheide. These areas have a high proportion of vegetation. A reason for the number of negative temperature anomalies that have now been detected/ proven, in contrast to that of the previous map edition from 2015, is the higher density of measuring points. In general, the groundwater temperature in the densely populated inner-city area is more than 5 K higher than that of the surrounding areas.

The other maps (02.14.3 – 02.14.6) show the groundwater temperature distribution for the reference horizons 40 m, 60 m, 80 m and 100 m below terrain surface in the State of Berlin. At these depths, daily and seasonal fluctuations can be ruled out. However, long-lasting and, for example, anthropogenic changes in temperature, that may have been caused by changes in building development or the climate, may manifest themselves at these depths.

Such temperature anomalies can be observed particularly in the inner-city areas in the borough of Mitte, but also at the southern edge of the city, in Berlin Lichterfelde along the Teltowkanal, with a history of construction use and intensive industrial use (groundwater temperature distribution for the reference horizons of 80 m and 100 m).

Other temperature anomalies, such as those in the south-west of Berlin on the border with Potsdam, in the northern portion of the Grunewald forest, in the area of the natural gas storage area, and in Lübars, on the northern border of Berlin, are linked to geological structures in the deeper subsoil. These temperature anomalies are assumed to be connected to the salt dome structures in the deep subsoil that exist in the Berlin area.

The presented temperature distributions in the deeper subsoil at more than 80 m below terrain surface, e.g. in the boroughs of Lichtenberg, Marzahn and Hellersdorf in the east of Berlin, may be rather inaccurate, due to the small number of measurements available.

In addition to the groundwater temperature distribution maps covering the different reference horizons, another map was developed focussing on average temperatures at depths between 20 m and 100 m. This map may also be used as a tool in the design of geothermal plants.

In summary, it was found that the groundwater temperature may more than 5 K higher in the densely populated inner-city area compared to the non-built-up surrounding areas. There is a clear connection between groundwater temperatures and the urban climatic conditions above ground. Regular measurement results at temperature measuring points, which are located in areas with different urban structures, prove this further.

The results of long-term studies indicate that, based on the progressing building development and the global climate change, it seems inevitable that the temperature of the subsoil near the surface as well as the groundwater will continue to rise substantially.