Management of Rain and Waste Water 2001 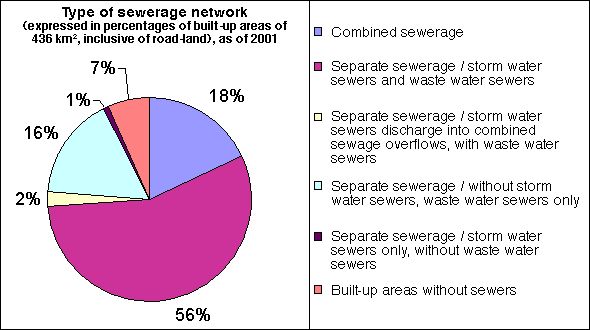 The inner city districts of Wedding, Tiergarten, Mitte, Prenzlauer Berg, Friedrichshain, Kreuzberg, Schoeneberg, parts of Neukoelln, and of Wilmersdorf, Westend, as well as Spandauer Altstadt are connected to the combined sewerage system.

A few city areas where rain water drains were provided without foul water drains are situated in the eastern parts of the city such as Blankenburg, Biesdorf-Sued, Kaulsdorf, Mahlsdorf, Koepenick-Nord and Bohnsdorf.

To reduce the load on combined sewers, some areas to the north of the municipal motorway rain water sewers were built which discharge into the rain overflow drains of the combined sewerage system. Sewage continues to pass through these combined sewers. This also holds true of the city area of Weissensee and sections of Schlossstraße in Charlottenburg, north of Bismarckstrasse.

Parts of Berlin which have foul water drains but leave stormwater to percolate into the ground are to be found mainly in surburban areas, such as in Gatow, Spandau, Konradshoehe, Heiligensee, Frohnau, and in a few other parts of the outlying city areas.

Lakes which are a part of the landscape and of parks, as well as ponds and other blind drainage water bodies are spread over the entire city area.

As a combined system prevails within the inner S-Bahn circle line and this area mostly does not have any separate sewers, this part of the city was not allocated to any stormwater sewerage catchment area. The only exceptions are Tempelhof airport and parts of Wilmersdorf to the north of the motorway, draining into the canals south of the Spree river (Neukoellner Schifffahrtskanal and Landwehrkanal). 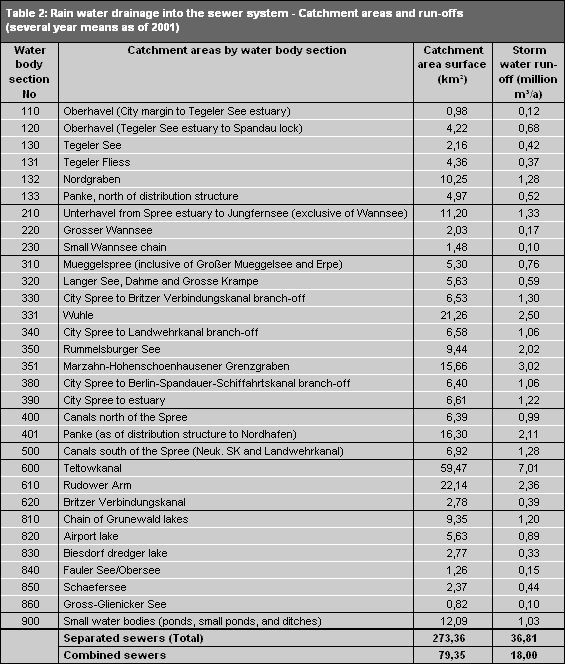 In some instances, very small water bodies have to cope with rain water quantities of very extended city areas. In case of heavier rainfalls this quantity is by far larger than the normal water volume. Examples of this are offered by the Schaefersee lake and the airport lake in Reinickendorf, the Dreipfuhl lake in Zehlendorf, the Obersee lake in Hohenschoenhausen, den Biesdorf dredger lake in Marzahn or small running waters like the Tegeler Fliess, the Nordgraben, the Zingergraben and the Panke in Reinickendorf und Pankow, the Wuhle in Marzahn/Hohenschoenhausen or the Neuenhagener Muehlenfliess in Koepenick.