The following steps were taken to evaluate the source grid data of the air temperature (2m) for the purpose of the Environmental Atlas (cf. Figure 2): 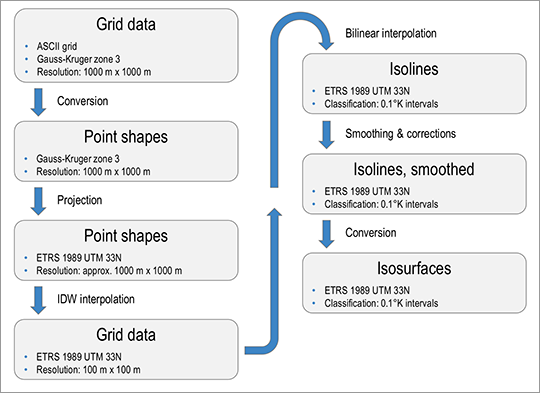 Fig. 2: Diagram of how the multi-annual mean grids of air temperature are processed for Berlin, 1981-2010
Image: ProAqua using statistical base from DWD 2018

The source data was available as ASCII grid data in the Gauss-Kruger zone 3 projection. The grids were converted into the ESRI shape format and then projected into the ETRS1989 UTM 33N coordinate system that is used in Berlin.

Technically, the data is grid data. According to DWD documentation, however, the temperatures should be considered point data, which refers to the centre of each grid cell (grid point). The temperature distribution is a physiographic process. It is continuous and steady. Therefore, the transitions between the mean temperatures in the individual grid cells should also be smooth. To this end, the source data (1 km x 1 km resolution) was interpolated to a resolution that is ten times higher, i.e. 100 m x 100 m.

Spatially, the mean temperatures differ only slightly with a range of less than 2°K. They are distributed relatively homogeneously. The source data is rounded to 0.1°K. This means that the spatial distribution only contains few distinct value expressions. Due to these constraints, an inverse distance weighted (IDW) interpolation with a search radius of 16 points was chosen as the interpolation method (cf. ESRI 2019a). The selected method is highly suitable here, as the data is smoothed without the interpolation fluctuating in the homogeneous value ranges.

Isolines were generated from the interpolated 100 m x 100 m grid data using bilinear interpolation (cf. ESRI 2019b). Isolines are lines that connect points of equal value. In relation to temperatures, these lines are also referred to as isotherms, i.e. they connect points of the same temperature. Isosurfaces comprise the areas between two isolines and thus indicate areas with temperatures within a specific range of values. However, the aforementioned properties of the source data increases the occurrence of artefacts/ display errors, e.g. along the edges of the grid or where values reach a plateau. The isolines were therefore adjusted manually afterwards and smoothed using Bézier curves. Subsequently, isosurfaces were generated from the smoothed isolines.