Standard parameters were chosen as indicators for the quality of near-surface groundwater: chlorides, sulfates, ammonium, nitrates, oxidibility, conductivity and levels of AOX and pesticides.

Ammonium and nitrate are considered parameters for pollution of near-surface groundwater by sewage water and feces. The oxidibility gives indications for organic pollution. Electrical conductivity, a sum parameter for dissolved substances in groundwater, is a parameter for contaminations of inorganic matter and a standard for general pollution of salts. The same is true for chlorides. ‘Chemically stable’, chlorides do not transform and can thus be followed over long distances. Groundwater deterioration from high sulfate impacts indicate debris underground or waste disposal sites with large amounts of building rubble. AOX stands for adsorbable halogenated hydrocarbons and serves as indicator for intensive industrial use. The presence of AOX is also characteristic for pollution from the storage of industrial waste (old contaminated sites).

The graphic depiction of results is oriented to legal limit values of the Drinking Water Regulations. It must be noted that limit values are valid in a strict sense only for drinking water (pure water). They are used here as critical parameter for groundwater because other criteria are lacking. Basically, a ground water quality without anthropogenic influences should be attained. Table 1 gives selected parameters and limit values set by drinking water regulations. 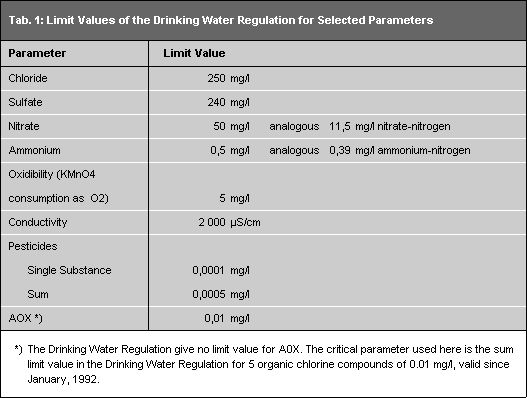 The detectable limit of AOX in the measuring program was 0.01 mg/l. No differentiation below the limit value could be made. Levels exceeding limit values by ten times are characterized separately.

Several substances were found at many locations during pesticide investigations. A sum limit value of 0.0005 mg/l was used for evaluation in the map.

Isolines (lines following identical concentrations of a substance) or contour maps which illustrate surface distributions of concentrations were not used in depiction. Test calculations with the aid of geostatic processes (Kannenberg 1992) have shown that, particularly for groundwater pollutions due to specific pollution points and thus locally limited, point data cannot be transferred to surface because of the insufficient density of measuring points. The estimation errors are too large. Better results are clearly obtained for materials that are introduced by diffuse sources, like sulfates. Measuring values are always point-referenced, in the interest of uniform depiction.

The map gives an overview of the distribution of tested substances in groundwater. Locally limited pollutions, such as those caused by old contamination sites, can not or can only be somewhat registered by the given measuring point density.