Management of Rain and Waste Water 2017

In Berlin, precipitation and waste water from private households, public institutions, industry and trade, as well as run-off from public road areas, generate large quantities of rain and waste water. These need to be piped away and treated, if appropriate. In 2017, the sewage plants treated some 717,000 m³ of waste water from private households, trade, industry and public institutions, as well as rainwater from Berlin and its suburban area every day. This quantity is equivalent to a little over 8 m³/sec., or about 15 % of the run-off of Unterhavel river below Berlin, given medium water flow. The amount of waste water generated in Berlin would be sufficient to fill the Great Wannsee lake within three weeks.

Waste waters are carried in a sewerage network with a total length of 9,725 km. The sewerage network is operated by the Berliner Wasserbetriebe (BWB, Berlin Waterworks). It was implemented in two different systems, the combined and the separate sewerage systems, and consists of a total of 4,403 km of waste water drains, 1,928 km of combined water drains and 3,324 km of rainwater drains, as well as numerous special drains and special structures, such as rainwater overflows, rainwater retention basins and culverts. Waste water collected there is pumped to the sewage plants by 163 pumping stations, through a network of 1,183 km of pressurized sewage pipes (Berlin House of Representatives 2015).

Berlin’s combined sewage canal system was built In 1873 according to a design by James Hobrecht, to drain the whole municipal area of Berlin as it was then. However, towns and communities surrounding Berlin, which retained their independence until 1920, mainly built systems based on separate drainage. After their incorporation into Berlin, their facilities were amalgamated into the present system. Drainage areas are oriented towards river courses and shipping canals, and also in accordance with the different terrain heights. The boundaries of drainage areas do not follow the borders of Berlin’s boroughs. About four fifths of Berlin’s drained areas are operated under the separate system, and the remaining fifth under the combined system.

In a system of separated drainage, waste water and rainwater are handled by two different systems. Waste water drains carry household, commercail and industrial waste water to the pumping stations. From there, pressurized pipes are used to take it to the Ruhleben, Münchehofe, Schönerlinde, Waßmannsdorf, Wansdorf, and Stahnsdorf sewage treatment plants. After treatment, sewage plants discharge purified water into Berlin’s bodies of water. 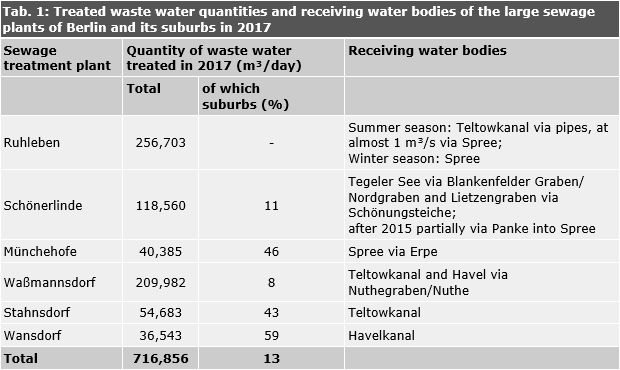 Tab. 1: Treated waste water quantities and receiving water bodies of the large sewage plants of Berlin and its suburbs in 2017
Image: Umweltatlas Berlin

Rainwater drains collect precipitation from impervious surfaces, cooling water from factories, and water from drainage ditches. This is carried directly to the larger or smaller surface waters. In some cases, very considerable areas of the city drain into very small receiving water bodies. Altogether, some 48 million m³ of rainwater per year are drained into water bodies by the separate sewerage system (SenStadtUm 2013). Rainwater from the separate sewerage systems is heavily polluted by dust, air pollutants, rubbed-off road surface and tire particles, leaked oil, leaves, animal faeces, road grit in winter etc. After more intensive rainfall, there have been repeated fish kills in smaller standing water bodies and canals with relatively little water. This is the result of oxygen-depleting processes resulting from the oxygen-consuming decomposition of drained organic substances that sets in immediately after the latter reach the water body. To reduce the pollution of water bodies, rainwater basins and retention soil filters for the treatment of rainwater have been installed at the main discharge points. Twenty-four facilities for rainwater treatment had been commissioned by the Waterworks by 2018; more than ten additional facilities were set up along the motorways.

This system almost single-handedly drains the old inner city of Berlin and Spandau also including the area surrounded by the inner circle line of the S-Bahn (city rail). In this combined sewerage system, household, commercial and industrial waste water is collected in a single drain together with the rainwater, and then fed to the next pumping station. From there, the combined sewage water usually takes the same route as the sewage from the separate sewerage system. The combined sewerage system includes not only rainwater relief facilities, but also water retention canals and rainwater overflow basins to retain combined sewage during periods of rainfall, and to thus delay its passage to the sewage treatment plant. In 2017, 18 such plants were in operation. In brief heavy rainfall, they are able to completely take up the combined sewage overflow. There are exceptions for situations of extended, intensive rainfall events. Once water then reaches a certain height in the drains, or if the pumping stations can no longer cope with the volume of water received, the combined sewage – which, in case of such downpours, consists mainly of rainwater (at a ratio of about 1:9 of waste water to rainwater) – flows untreated into the water bodies via rainwater overflow drains.

In order to achieve the environmental objectives of the Water Framework Directive and to meet the requirements of the water authorities‘ permission to discharge combined sewage into Berlin‘s bodies of water, the BWB and the Senate have launched a construction programme to create a total of 300,000 m³ of retention capacity (current storage capacity is about 235,000 m³) in the inner-city combined sewerage system by 2024. This will considerably reduce overflow frequencies and volumes of combined sewage flowing into the Berlin water network.

In the outskirts of the city, there are areas connected to sewerage systems, which do not include, however, rainwater drains. In these areas, rainwater seeps into the ground.

Despite considerable efforts by the Berlin Waterworks (BWB), not all inhabited areas have been connected to the sewerage network as yet. In those built-up areas of Berlin with no house connections, sewage is collected in septic tanks with no discharge, from where it is taken to sewage treatment plants by authorized transport companies.