Oxidibility is slightly high, with a mean value of 3.0 mg O2/l over the entire urban area. The limit value of the Drinking Water Regulations was exceeded in 25 cases. This is about 10% of all sampled measuring points. Causes are waste disposal sites and old contaminated sites, as well as the influence of operations of sewage farms and waste water processing areas. Higher values tended to appear in the area of the Pleistocene watercourse (= Urstromtal). A conspicuous frequency of high values is observed north and south of the large Müggelsee Lake. The influence of inflows from waste water processing areas and settlement areas without sewage treatment facilities is apparent here.

Electrical conductivity is considered a parameter for impacts of inorganic matter. The subsurface shows the effects of inputs containing salts such as nitrates, phosphates, chlorides and sulfates. Both East and West Berlin show similar conditions in reference to mean values. The mean value for the entire city area is about 1,000 mS/cm. Levels exceeding limit values were only found at 3 measuring points. However, if the lower guide value of 1,000 mS/cm from the EU guideline “Quality Requirements of Surface Waters for Drinking Water Use” is applied, there were values exceeding the limit at 92 measuring points.

Ammonium is produced as a decomposition product from animal and plant protein. Only traces of ammonium are generally present in unpolluted groundwaters. Its presence in near-surface groundwater usually indicates pollution from waste water and feces. Health dangers from ammonium ions are not currently known, but their presence in groundwater is hygienically disturbing, because of their usual origins in feces.

Causes for the relatively high ammonium concentrations in groundwater are primarily due to sewage farms which discharged large amounts waste waters into the groundwater for decades. Further impacts followed from percolation of effluents in settled areas without sewer systems and from leaking sewage pipelines. High ammonium values can also appear under natural conditions in low-oxygen groundwaters, such as under moors, because ammonium impacts cannot be oxidized there. Limit values of the Drinking Water Regulations were exceeded at 123 measuring points. This is about 45% of sampled measuring sites. The mean value for ammonium-nitrogen in Berlin is 1.2 mg/l, well above the limit value set by the Drinking Water Regulations. The significantly lower ammonium amounts in groundwater samples from flat uplands in comparison to the Pleistocene watercourse are clearly evident. It can be supposed that the covering layers of marl are significantly more able to hold back inputs of ammonium than the very permeable sands.

High nitrate impacts in drinking water in parts of Germany was a subject of public discussion in recent years. Nitrates in higher concentrations are considered toxic. It can be reduced to nitrite in the intestinal tract. Nitrite then binds with hemoglobin in the blood and restricts the transport of oxygen in the blood circulatory system. This leads to oxygen deficiency manifestations (methemoglobinemia) which can be deadly for children, especially infants. The transformation of nitrates can also release nitrosamines, which are carcinogenic.

Nitrate impacts in Berlin groundwater are generally low, with a mean value of 8 mg/l. Limit values of the Drinking Water Supply Ordinances were exceeded at only 13 measuring points, about 5% of measured sites. This is because intensive agriculture areas do not exist in the city, for all practical purposes. Agriculture and its considerable use of mineral fertilizers and liquid manure is considered a primary cause of high nitrate impacts in groundwater. The concentration of levels exceeding limit values in the north of the Pankow district is due to the large sewage farms, both closed and still operating.

Sulfate impacts in groundwater are relatively high in Berlin. Groundwater in sediment stone is generally high in sulfates, it’s true, but the high values in Berlin are mainly man-made. The cause is the underground distribution of building rubble – especially debris – over large areas (most of it war damage). Building rubble and debris contain sulfurous plasters, which are washed-out by precipitation waters. Thus there is a tendency for higher values in the city center than in outlying areas. High local values are also found in the sphere of influence of waste disposal sites which have a large proportion of building rubble and debris; such as the Teufelsberg. Values at 54 measuring sites exceeded the limit value of the Drinking Water Regulations, about 20 % of sampled measuring sites. The average value of 202 mg/l in West Berlin is higher than the 132 mg/l in East Berlin. The average value for the entire city is 181 mg/l.

Chlorides are not toxicologically alarming, but they can be considered a measure for general pollution. The chloride impacts in Berlin groundwater are relatively low in general. The limit value of the Drinking Water Regulations was locally exceeded at 12 measuring sites. The spatial distribution of chloride impacts is generally even. Only in Köpenick were there conspicuously high values, due to geological conditions. Groundwater containing salts sometimes climbs from deeper layers to the surface. Other exceeded limit values were found in the vicinity of waste disposal sites.

The presence of AOX (adsorbable halogenated hydrocarbons; AOX = adsorbierbare halogenierte Kohlenwasserstoffe) in groundwater is always due to anthropogenic activity – the effects of small business-industrial use and pollution from old contaminated sites. It has been demonstrated that more than half the groundwater measuring sites show levels that considerably exceed the selected critical parameter. There is a clustering of high values in Spandau. Sites with high AOX values are also located outside this area, which can be traced back to local polluters and old contamination sites. 14 measuring sites were determined to have values over 0.1 mg/l, 10 times the critical parameter.

A particular problem is presented by the group of highly-volatile chlorinated hydrocarbons (CHC – LCKW). This material is detected along with other materials in the determination of AOX. As the studies of Brühl et al. (1991) document, the boulder marl overlying the groundwater aquifer are not an effective protective barrier against this material group. In fact, the highly-volatile CHCs penetrate boulder marl overlappings relatively easily. Under the reduction conditions which predominate during this migration there is some transformation into degradation products that are even more strongly water-endangering.

Pesticide was found in 16 of 31 groundwater samples tested for pesticides in 1991. The value limit of the Drinking Water Regulations was exceeded 11 times at tested measuring sites. The sum limit value, used in the map as critical parameter, was exceeded twice. The Working Group of States for Water considers the simple presence of pesticides disturbing – in any measured concentration.

Measuring sites with the highest values are in the old border strips between East and West Berlin. The very great use of pesticides for many years to maintain border security boundaries (“death strips”) is noticeable. Pesticides were primarily detected in East Berlin at agricultural areas, but the concentrations are in a relatively low range.

Triazine and metabolites were usually detected, but Lindane and DDT also. A material from the phenoxycarbon acid group was found in 10 samples in East Berlin measuring sites. It is not certain that these impacts come from use of herbicides.

Data were also evaluated for cadmium impacts in groundwater. Cadmium is considered a representative indicator for heavy metal impacts in groundwater, because of its environmental behavior. It has a high accumulation rate in soils. Even the bare possibility of remobilization and washout is a considerable point of danger for groundwater. Cadmium is severely toxic to the human organism. Liver, kidneys and bone marrow are the most susceptible organs or accumulation points in chronic or acute cadmium exposure. Most cadmium absorption proceeds above the digestive tract.

A depiction in the map was declined, however, because data for East Berlin is insufficient, and no contaminations worth mentioning have been registered in Berlin groundwater. Cadmium was detected at only 14 measuring sites. The remaining 165 measuring sites were negative or below the detection threshold.

All groundwater resources in the Berlin area have been altered by anthropogenic impacts greatly beyond those of geological conditions and is noticeably polluted. A comparison of Berlin groundwater and unimpacted groundwater from a reference area in Lüchow-Dannenberg shows that the groundwater in Lüchow-Dannenberg clearly has lower levels of most of the tested substances, both in average value and in maximum value (cf. Tab. 2). 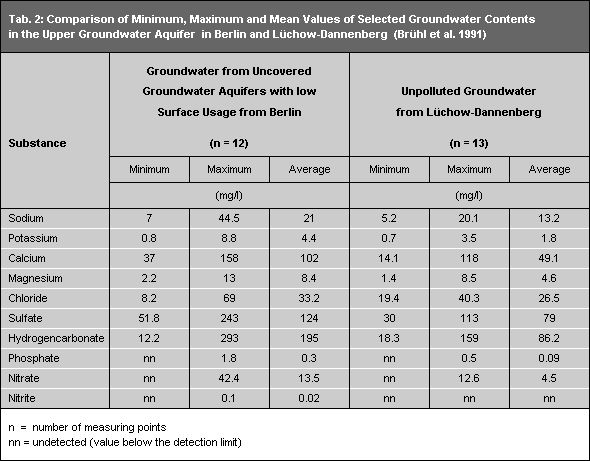 Tab. 2: Comparison of Minimum, Maximum and Mean Values of Selected Groundwater Contents in the Upper Groundwater Aquifer in Berlin and in the Lüchow-Dannenberg Area
Image: Brühl et al. 1991

Ammonium and AOX values are high in the entire city and exceed limit values of the Drinking Water Regulations or the parameter of valuation chosen for AOX. It must be taken into consideration that ammonium is oxidized to nitrates during processing at waterworks. The nitrate level is indeed raised, but is not disturbing at these low concentrations. Table 3 shows these changes during water processing, as well as data for raw and pure water at wells of the Berlin Waterworks. The values of raw water supplied from wells are listed across from the values of purified water fed into the drinking water network.

The situation for AOX must be judged more critically, for this material can be removed from water only with a great technical expenditure. Other substances which could give indications of industrial pollutants of groundwater, such as arsenic, PAK or mineral oil, have only been tested for at certain sites. They cannot be depicted in a map encompassing all areas.