The first regular recording of groundwater levels was initiated in Berlin as early as 1869, at 27 groundwater measurement points
The Berlin groundwater monitoring network grew rapidly. By 1937, there were already more than 2,000 observation wells. The monitoring network of, the State Geological Survey contains approx. 3,400 observation wells that are installed in five different aquifers.
In the inner-city area, which is not within the area affected by the waterworks, groundwater conditions have been influenced strongly by anthropogenic processes for over 100 years now. This can be shown by way of the example of the hydrographic curve of groundwater level at the observation well 5140 (Fig. 9) in the borough of Mitte, as following: 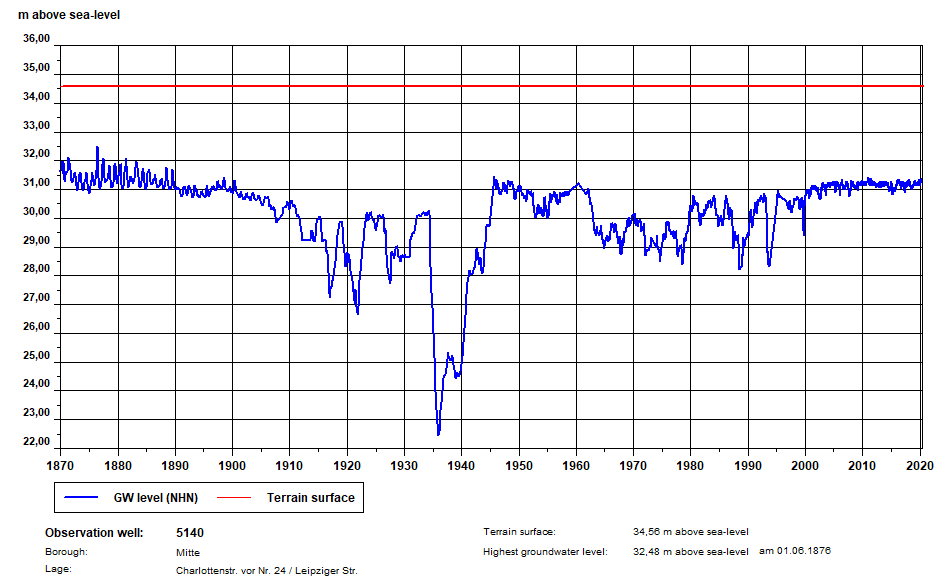 In around 1,000 groundwater observation wells, data loggers are installed since the late 1980s, which record the groundwater level on a daily basis. About 10 % of these data loggers are equipped with a remote data transmission module so that the data is sent to the Geological Survey of Berlin on a daily basis. The data from the rest of the data loggers is retrieved manually from the logger on a monthly to three-monthly basis and then imported into the database. The measured values of the city state wide groundwater measuring network are published on the website of the “Wasserportal” and are freely accessible to everyone.

In addition to the data from the network of the Berlin geological survey, the Berliner Wasserbetriebe and the Brandenburg State Environmental Agency as well as other waterworks operators in Brandenburg provide groundwater level measurement data for the Berlin area and the surrounding areas. If the groundwater has a direct connection to surface water (effluent situation, Fig. 4a), additional level data from surface-water measurement points are used.

The distribution of the groundwater observation wells is irregular: The monitoring network is densest in the city centre and in the immediate intake areas of the waterworks, and less dense at the outskirts of the city, especially in the surrounding areas in Brandenburg.