Groundwater tables in the Berlin area can generally be determined in their hydrogeological conditions in spite of the massive influences exerted on them today. Groundwater flows from the Barnim and Teltow flat upland areas into the Warsaw-Berlin Pleistocene watercourse, with the Spree river as receiving body of water, and from the Nauen Platte into the Haveltal. The extent of changes in this natural flow behavior as well as groundwater table levels depend upon precipitation conditions, but even more upon the influence of groundwater withdrawals and returns.

The water management year 1976 was characterized by low amounts of precipitation (70% of the 60-year average), and by comprehensive interventions in the groundwater economy.

Groundwater withdrawals reached a new record due to public water supply plants and diverse civil-engineering construction projects (cf. Tab. 1). West Berlin especially showed wide cones of depression resulting from subway construction (Line 7, Fehrbelliner Platz-Spandau) and the city freeway (Innsbrucker Platz). Lowering of groundwater levels in the southern areas of the Wedding borough is due to a private sector construction project. The high(est) values of public groundwater withdrawals in West Berlin are reflected in wide cones of depression under the Jungfernheide and Beelitzhof waterworks. All waterworks operated in their present size, except for the Kuhlake gallery of the Spandau waterworks. 315 larger private sector water supply plants also affected groundwater level gradients noticeably. 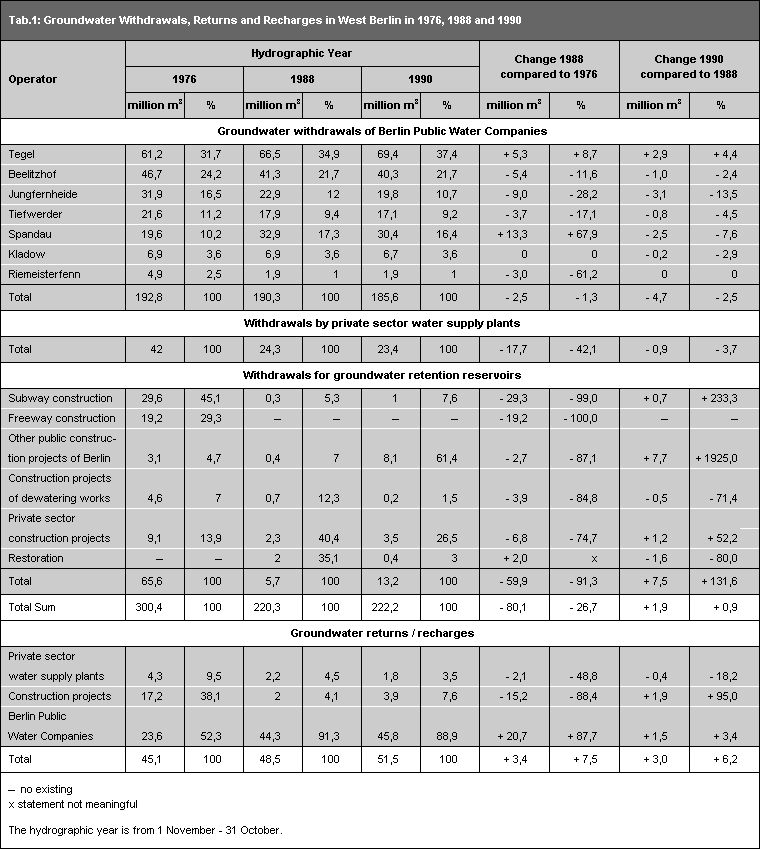 No depiction of the entire East Berlin area is possible due to insufficient data bases. The low degree of expansion of the largest waterworks in Friedrichshagen is remarkable. In 1976 only the A-D galleries north of Müggelsee (see = lake) existed (cf. Map 01.22). The large plants south of the lake were put into operation between 1982 and 1984, with increased demands exerted by construction of the new residential areas of Marzahn, Hellersdorf and Hohenschönhausen as well as reduced surface water withdrawals from Müggelsee. The galleries which existed in 1976 withdrew about 14.6 million m3 raw water in May 1976, a record for this month. There are correspondingly large cones of depression around the waterworks.

Large construction projects in East Berlin with groundwater retention reservoirs were mainly in the Mitte borough, at the construction site for the Palace of the Republic, the Charité hospital, various hotels, and the expansion of the Friedrichstraße boulevard. No information is available for amounts withdrawn by private sector water supply plants.

Measures for groundwater recharge and return at construction projects for the stabilization of the groundwater economy were performed in the entire city. This amounted to about 45 million m3 in West Berlin, 52% of it around the Jungfernheide waterworks, which fed lakes Kuhlake and Saatwinkel. Another 38% were returned at construction projects (cf. Tab. 1). A groundwater recharge by means of an earth basin was performed in East Berlin around the Johannistal waterworks between 1972 and 1976. Infiltrated amounts in 1973 were 1.5 million m3. Groundwater has been recharged by the Stolpe waterworks into the bordering Havelwiese since 1974. The amounts flow to recharge by natural slope and amount to about 6 million m3/year.

In comparison to the strongly lowered groundwater levels in May 1976, the picture changed for large portions of Berlin, differing in both parts of the city.

This favorable development was supported climatically by mild months in winter and spring with high amounts of precipitation.

Changes in East Berlin in comparison to 1976 are especially noticeable in the Köpenick forest area. The expansion of the south gallery of the Friedrichshagen waterworks at the beginning of the 80’s led to cones of depression. In later years this also led to a deterioration of vegetation in individual wetlands.

There is no information for private sector water supply plants or groundwater withdrawals at construction sites in East Berlin in 1976. Withdrawal amounts in 1988 by private sector water supply plants obligated to payment (excluding hospitals, sports facilities, zoos and similar public facilities) were 12.9 million m3. About 12.7 million m3 were pumped out by construction projects. Extensive construction projects in the Mitte borough led to lowering of groundwater levels similar to 1976. The new residential areas of Marzahn and Hellersdorf, on the other hand, are located on the Barnim flat upland. No lowering of groundwater was required because there were greater groundwater depths from the surface.

Groundwater recharges in East Berlin around the Stolpe waterworks were about 5.6 million m3 in 1988.

Groundwater levels in West Berlin changed only slightly in May 1990 compared to 1988. The hydrographical year 1990 was average climatically, with 628 mm of precipitation (measuring point Dahlem). Withdrawal amounts of public and private sector wells and groundwater recharges are at comparable levels (cf. Tab. 1). There were no important changes in groundwater tables.

East Berlin, including the Stolpe waterworks, showed a different development. East Berlin waterworks withdrew 31.3 million m3 less in 1990 than in 1989. This was a result of the economic effects of German reunification and the reduced commercial/industrial activity associated with it. The consequences of this reduction were smaller cones of depression around the galleries, and a more balanced situation with smaller gradients in the rest of East Berlin. Groundwater recharge in the Havel lowlands at the Stolpe waterworks remained unchanged at 6.2 million m3 compared to 1988.

The long-term assurance of a balanced groundwater economy requires such measures as: 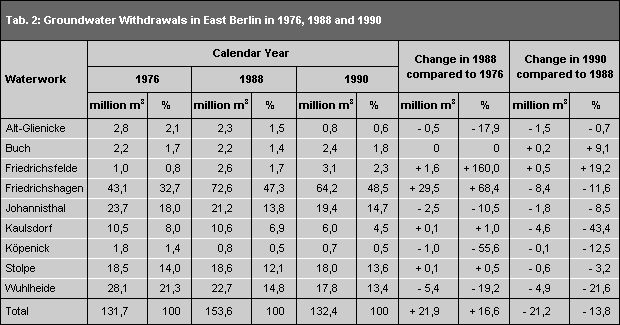