The table shows the populations of the boroughs of Berlin as used for the calculation process; their total populations; the number of residents not considered, i.e., in the blocks with population numbers below the threshold of 10 inh./ha. The remaining columns distinguish between the four degrees of availability ranging from “with good availability” to “without availability” and the inhabitants that fall into these categories (cf. Calculation of the Degree of Availability). “Inhabitants without availability” refers to those people, who, according to the availability analysis, do not have access to suitable green space close to their homes.

In the outlying boroughs, the situation is generally better. The available green spaces are frequently large; in some cases, forest areas are directly adjacent to residential areas. Due to the less dense development structure, the population density is considerably lower.

Availability development between 2011 and 2016

Since 2010, Berlin has seen a population growth of about 300,000. Based on this substantial increase, the state’s number of inhabitants amounts to 3,690,000 today (June 30, 2017). Berlin’s population, however, has not been growing evenly across the individual boroughs. Increases rather vary between almost 50,000 additional inhabitants in Mitte as compared to about 14,000 in Steglitz-Zehlendorf (Statistical Office of Berlin-Brandenburg 2017).

If these new inhabitants are not provided with access to newly built parks as part of compensatory measures, the availability of near-residential public green spaces in the boroughs decreases to a some extent. Densification measures within blocks also reduce the share of private and semi-public open spaces in residential areas.

The map of changes from 2011 to 2016 (PDF; 12.8 MB), shows availability increases/ decreases for each block or block segment area by 1, 2, or 3 categories. The grey categories “Analysis excludes 2011” and “Analysis excludes 2016” indicate block or block segment areas, which failed to meet the analysis limit of 10 inhabitants/ha for the year in question.

The map shows that only a relatively small number of areas throughout the city have seen a change in availability. Changes by one availability category prevail, however, some areas are affected by major changes. The availability change that can be seen in the Klixstraße planning area, and more specifically in the Reinickendorf/ Borsigwalde region, is based on the Green-Space Information System (GRIS) now listing the Wackerweg allotment gardens as a public green space. This increased availability, is regarded as limited, however, as the allotment garden paths have few recreational qualities only.

Both the positive effects of creating a new park, as well as decreases in availability, will be detailed in the following three examples:

Example 1: In the borough of Treptow-Köpenick, Altglienicke neighbourhood: north of the street “Zum Alten Windmühlenberg”, a park facility was created, which improved availability in the quarter by three categories.

Example 2: In the borough of Mitte, availibity deteriorated by one category, based on an increase of the population density in the area of the Panke, east of Chausseestraße and west of the S-Bahn line.

Example 3: Based on increased population numbers, due to, for example, the old hospital grounds “Am Urban” being repurposed for residential use, availability deteriorated by one category in the blocks north of Urbanstraße in the borough of Friedrichshain-Kreuzberg, comparing the years 2011 and 2016. 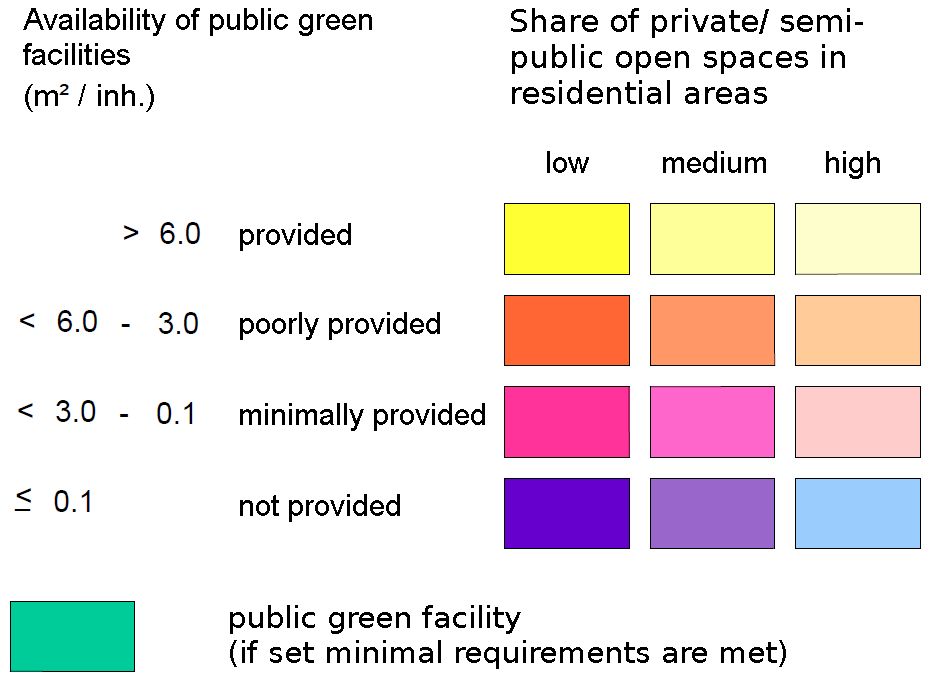