Wind climatic questions have long played a role on the plane of object-related investigations for the impact of planned developments. They can be solved satisfactorily with the aid of corresponding technical resources (wind tunnel studies), also without on site measurements. However this approach is hardly feasible for a metropolitan area. For this reason wind measurements were bound in the climatic investigations to the existing environment atlas. In addition, wind speeds were determined for selected building structures. These were set in relationship to the corresponding values for the reference station Tempelhof airport which is classified as undisturbed.

Since fundamentally in the course of the day the wind speed lies between the maximum at noon and/or in the early afternoon and the minimum in the night, day – and night measurements were evaluated separately. The two median values existing thus at the individual measuring points were collated with city structural types contained in the Environment Information System (UIS) of the Berlin Department of Urban Development and Environmental Protection (cf. Map 06.07, SenStadtUm, in preparation).

The city structural types consist of 14 groups, in which the wind speed conditions themselves are approximately comparable. A median value for the measuring trip results was calculated separately for each of these groups again by the times of day. As a result average values of the wind speed could be calculated for day and night periods in 2.70 m height and in reference to 14 structural types -groups.

As comparable values for relatively uninfluenced wind conditions – in reference to the points in time of the day- and nocturnal measuring trips – the medium wind speeds at the station Tempelhof Airport were collected (cf. Deutsche Wetterdienst 1992). As the values in Tempelhof are measured at 10 m above ground, a conversion was used, under consideration of the terrain roughness, to adjust the remaining measurements for those taken at a measurement height of 2.70 m resulted. As calculation result the mean lay for the periods of all ascent for the station Tempelhof in 2.70 m height with 3.6 m/s and/or that of the night excursions with 2.3 m/s.

In a further work step the medium values of the wind speeds of the individual structure types – groups were set proportionally to the values of the airport Tempelhof in relationship, whereby the day – and night values of Tempelhof were set respectively 100 %. The wind speeds in block courtyards and in forest areas could be determined from the above named research together with the monitoring trips (cf. Fig. 6). For the area the bodies of water was established because of general knowledge normatively the respectively least deviation compared to that of the reference station. 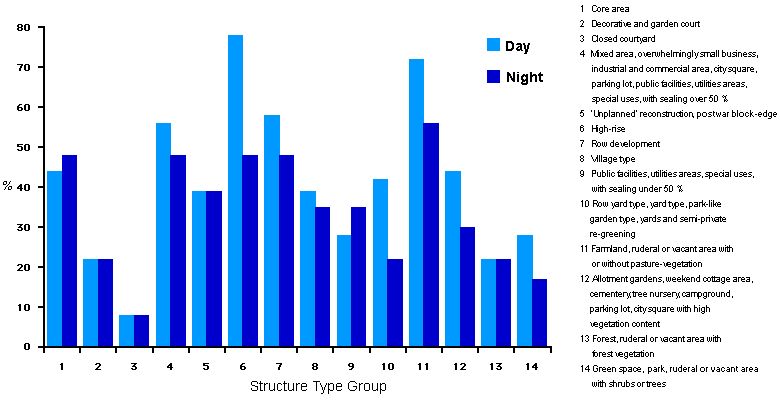 Fig. 6: Average Wind Speed of the Structural Types - Groups in 2.70 m Height Above Ground in Correlation with the Reference Station Tempelhof Airport in % (Tempelhof = 100 % daytime and at night)
Image: Umweltatlas Berlin

The methodological approach chosen presents average wind speeds for each group of urban structure types for selected, representative day – and night situations. Due to the respective surface contours, the particular vegetation structures, the situations in the urban area etc. individual surfaces within each group local peculiarities could only be taken partially into consideration. Here specifically targeted investigations for each individual case are necessary. So the wind speeds can be very different within the structure group farmland, vacant and barren areas without or with meadow-like vegetation. The great farmlands on the outskirts of town display as a rule very high daytime values. During the same time of day reduced speeds are typical for inner city, chiefly smaller areas of similar structure. Likewise at night these differences in area and situation play an essential role. The outskirts and wide-open areas promote the formation of stable near ground air layers and cause with it a considerable wind speed reduction. Inner city smaller surfaces are far less subject to this effect. The largely unstable air stratification here contributes mostly higher wind values, also at night. A similar situation is to be observed also at bodies of water. The large, lake-like bulges in the Havel and Spree admit higher speeds in comparison to the city Spree and to the canals. In order to take into consideration these fluctuations within a structure group, the wind speeds were classified for the depiction.