The graphic display of the evaluated heating structure data for the residential and work-places in Berlin provides information both on larger-scale contiguous areas and on block-segment areas.

The dependence of the fuel use on building structure and location in the city is clear even at the level of the 23 municipal boroughs. There is a clear predominance of coal in the inner city districts, or district heating in the East Berlin boroughs with a high share of large-scale developments (cf. Tab. 4).

Map 08.01.1 – District Heating Supply Areas, shows clearly the local proximity of heating plants and heating power plants to their respective service areas. The largest share of the total district heating supply in Berlin is provided by the BEWAG, with a network totaling some 1,000 km. The great majority of the 2,208 blocks provided with district heat show high proportions of district heat supply (greater than 60 %). In the new high-rise residential areas on the outskirts, such as Hohenschönhausen, Marzahn or the Märkisches Viertel, contiguous residential areas are completely provided with district heat. Altogether, the depiction makes clear the Berlin’s leading position in the share of district heat supply Europe-wide. However, there is great potential for additional connection of coal-heated old building at the edge of district-heating-supplied areas.

Map 08.01.2 – Gas Heating Supply Areas, shows the finely meshed distribution of the network over the entire built-up area of Berlin. The proportional shares of the total heated area in the respective statistical blocks are generally between 10 and 40 %. High gas supply shares are evident in only a few blocks, e.g. apartment blocks in Spandau, Zehlendorf, Britz, Reinickendorf, Pankow and Köpenick, as well as individual commercial, administrative and service locations distributed throughout the city. Due to the widespread distribution of natural gas lines in the urban area, a large potential for expansion exists, analogously to that for district heat.

Until the reunification of the two city halves, there was practically no oil-fueled building heating in the eastern part of Berlin. Map 08.01.3 – Oil Heating Supply Areas, which shows the supply situation as of 1993-94, still indicates this fact very clearly. While in the western part of the city, oil-fired heating supply plays a very dominant role (approx. 42 % of the entire heated area of West Berlin), the eastern part (approx. 3.5 % of the entire heated area of East Berlin) so far shows a clear increase only for single-family and duplex house areas (cf. Tab. 4 and Fig. 3). 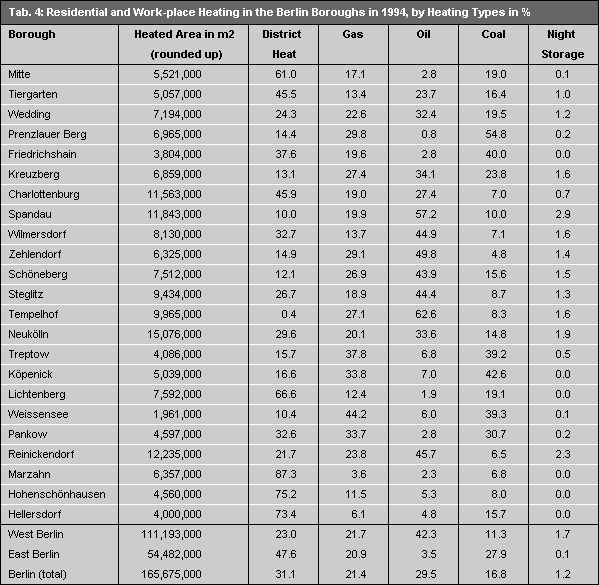 Tab. 4: Residential and Work-place Heating in the Berlin Boroughs in 1994, by Heating Types
Image: Umweltatlas Berlin

The further development will depend essentially on the extent to which the plan for district heat and natural gas supply precedence areas provided in the Berlin Energy Concept is implemented. 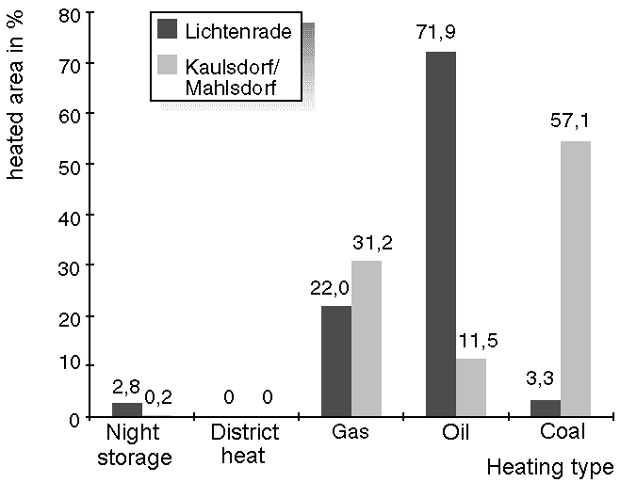 With the exception of the district-heating supply concentration areas, a certain degree of oil-fueled building heating can be found in nearly all blocks in West Berlin. Particularly commercial sites, modernized old building quarters and suburban housing developments show a high share of oil heating systems. In single-family and duplex house areas, oil is the predominant fuel for building heating; the oil share of the total heated area in these blocks is often far above 60 %.

Despite widespread conversion measures in the public and private areas, coal is still used for heating a considerable proportion of the city, especially in the inner city boroughs of East Berlin (cf. Fig. 4). 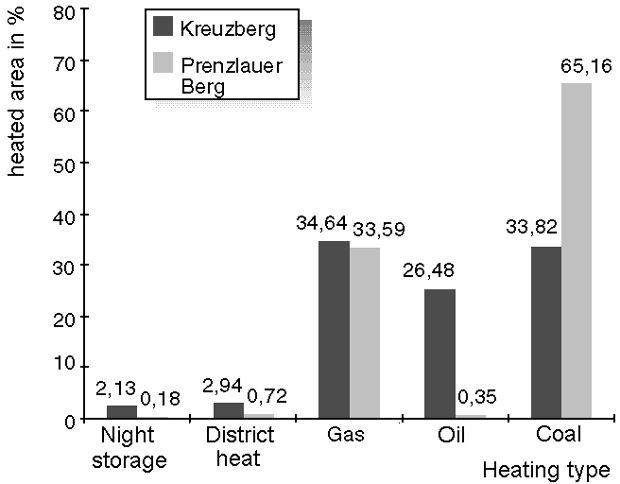 However, Map 08.01.4 – Coal Heating Supply Areas, also shows clearly that in the single-family and duplex housing areas in the eastern part of Berlin which, in 1989, were almost exclusively coal-heated, coal had, five years later, already been widely displaced by fuel oil or (liquid) natural gas. In the western part of the city, the use of solid fuels in the energy sector is proportionally only about a third of that in the eastern part, and will decrease further. What cannot be directly seen from the representation is the fact that in the area of district heat, the lion’s share of fuel for the large heating power plants of the BEWAG continues to come from mineral coal, occupying more than 80 % of energy carrier use (cf. Map 08.02.2).

In this map, the still very different heating structure of both city halves can be seen. In the western part, fuel oil is the dominant fuel for building heating. Generally, the same share of gas and district heat can be found in the East and West, albeit with clearly different distribution structures.

While in blocks in the western inner city area, the oil accounts for approx. 40 % of the total usage, the share of this heating type reaches levels exceeding 80 % in the western outskirts

In the eastern part of the city, in addition to the very high share of district-heat, coal continues as the predominant fuel used for residential and work-place heating, particularly in the old-building areas of the inner city, as well as in single-family and duplex house areas on the outskirts of town. Here, however, a further significant shift toward installation of other energy carriers can be assumed.

The fact that 21 % of all Berlin residential and work-place space is heated with gas does not emerge from the representation so clearly because of the relatively even distribution of the gas supply over the entire urban area. Aside from small concentration areas in Pankow, Treptow and Köpenick, such mixtures of heating types as gas/coal are the rule in East Berlin. As a result of the conversions of the last years, many blocks in single-family and duplex house areas on the outskirts of town already have a combination of gas, oil and coal, whereby the main energy carriers in the future will be fuel oil or gas. In the western part, mixed supply with gas and oil is predominant in areas with closed block development, for instance in Schöneberg, Tiergarten, Wedding and Tempelhof, and also in Spandau and Reinickendorf.

In addition to the outskirts areas of East Berlin with a high share of coal heat, the inner-city multi-story old building areas of Friedrichshain, Prenzlauer Berg and Pankow have a very high proportion of individual coal heating. These old building areas adjoin district-heat-supplied areas both to the east and to the west.

With regard to the further development of the heating stock, the most important areas, in addition to the mixed-supply areas, are those areas where different supply structures are directly adjacent. Due to the spatial proximity, good opportunities exist in both cases to develop the energy carriers district heat and gas further.

Map 08.02.2 – Fuel Use of Significant Heating Plants and Heating Power Plants shows the differences at the power plant level in the choice of energy carriers used. The over 80 %- market share of mineral coal use for heating at the eight BEWAG heating power plants in West Berlin contrasts with the four heating power plants in the eastern part of the city, with their natural gas share of almost 60 %. Moreover, in East Berlin, the lignite proportion of almost 40 % of solid fuels constitutes a relevant factor, compared with less than 1 % in West Berlin (cf. also Fig. 1).