Pollution due to noise in residential and work areas is extreme. However, even during free time, when people want to recuperate, noise harms their well-being. Many parks and meadows, but also large parts of the urban recreational areas are so noise-polluted that their usefulness for peaceful recreation is greatly limited.

In recent years, the driving noise caused by individually-owned motor vehicles has of course receded slightly due to technical innovations; however, due to the increasing numbers and greater speed of cars, the total noise level has climbed.

In addition to the noise of motor vehicles, railways and airplanes, noise pollution also occurs due to industry, trade and building activity. In addition, there is neighborhood noise (i.e., noise from household appliances, musical instruments and lawn mowers, etc.) as well as noise from sports and other leisure activities and events. The intensity of the annoyance from the different noise sources was investigated by the Federal Environmental Agency (cf. Fig. 1). 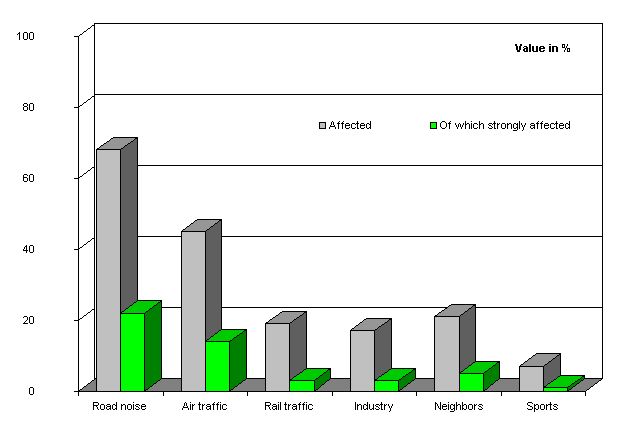 Noise can be defined as a sound-producing event which would be considered disturbing by the majority of persons.

Sound events are air pressure oscillations with an alternation of 20 to 20,000 Hz, which can be perceived by the human ear. The perceptibility of sound events by the human ear extend from the audibility threshold, with an effective value of the air pressure oscillation of 0.00002 Pascal (0.0002 µbar), up to the pain threshold, with an effective value of 20 Pascal (= 200 µbar).

To obtain a graduation scale conceivable to the human mind, the sound pressure is indicated in a logarithmic scale of sound pressure levels, by means of the unit “decibels” (dB). In this scale of values, the above-mentioned perceptibility range of the human ear extends from 0 to 120 dB. The sound volume perception of the person is determined by the interaction of the physical sound pressure level (0 to 120 dB) and the frequency (20 to 20,000 Hz). The greatest sensitivity of human ear is in the medium range, between 1,000 and 4,000 Hz. The frequency rating known as the A-rating is oriented toward this circumstance. Noises of low (20 to 1,000 Hz) or high (4,000 to 20,000 Hz) frequency positions are considered with a slighter weighting than medium frequencies when ascertaining the so-called A-sound level. A-sound-pressure levels are indicated in decibels (A) [dB(A)].

The typical A-sound levels occurring from different noise sources are shown in Figure 2. 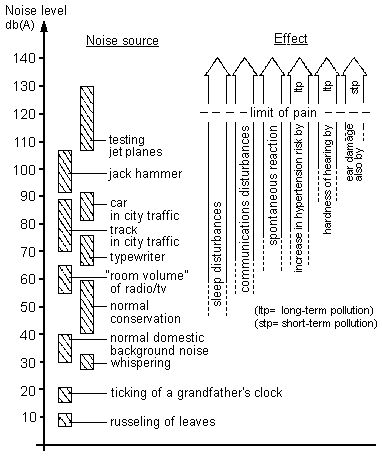 Traffic-caused sounds are classified by the majority of the population as disturbing, and hence as noise. Noise is considered, according to the present state of knowledge, as a risk element which can effect the physical, psychic and social well-being of a person adversely. Alone and/or together with other pollution factors, noise can cause health impairments. The following effects can be distinguished:

The noises occurring in everyday life are frequently exposed to major fluctuations. Their annoyance intensity is described by the evaluation level. The evaluation level is determined by a median value, the mean level. This is calculated by means of a somewhat complicated conversion process, in which the sound volume (sound-pressure level) of the occurring noises and the respective duration of their effects are set in a relationship with the duration of the evaluation period, e.g. the 16 hours of daytime, from 6 AM to 10 PM, and the nighttime, from 10 PM to 6 AM.

The evaluation level is a measure for average long-term noise pollution. It describes a (theoretical) continual noise of constant volume, which – if it were actually to occur – would calls forth a measure of annoyance equal to that which is actually caused by the different real noises, with their distribution over time, during an equal period. Goal values in urban development planning or fixed limits set by legislation can be compared with this value.

Tab. 1: Influence of the Traffic Volume on the Evaluation
Image: Umweltatlas Berlin

For urban development planning, acoustical orientation values are specified by German Industrial Standard (DIN) 18005, of May 1987, for noise pollution.

The indicated value for green and open spaces sound levels (during the day and at night) is:

and is to be compared with the evaluation level shown on the map.

In the expert opinion “Study of the Ecological and Urban-compatible Load Capacity due to Motor-vehicle Traffic for the Berlin Inner City“, the following values for recreational zones were recommended in 1991:

The noise prevention ordinance of Switzerland provides the following values for recreational zones:

The orientation value of 55 dB(A), the target value for green and open spaces according to DIN 18005, is based on results of noise-effect research. According to that, hardly any vegetative reactions and no bodily damage occurs up to this sound pressure level. Also, the psychic and social impairment lies within an acceptable range. With normal diction, a satisfactory conversation is possible for persons conversing at a distance of 2 m.