An essential problem in the definition of climatically based goals and methods is that no concrete limits and index values for evaluation can be taken from any regulation, i.e., comparable to the Technical Instruction on Air Quality (TA-Luft).

It has therefore been necessary to define particular criteria and goals for the map of climate functions. The guidelines of the German Meteorological Society (DMG, 1989) provide a rough framework, since they set the goal of an ideal situation in which an urban climate would be largely free of pollutants, and would offer city-dwellers the greatest possible diversity of atmospheric conditions, while avoiding the extremes.

Moreover, since the end of 1997, the VDI Guideline 3787, Sheet 1: Climatic and Air Hygiene Maps for Cities and Regions, has existed, in which methods for the preparation of climatic and air hygiene maps are to be introduced and recommended. The main emphasis of the recommendations is the use of so-called synthetic climatic maps, “which no longer show the spatial distribution of climatic elements, but rather mutually delimit spaces in which certain climatic features relevant for planning occur together and can mutually reinforce their effects” (ibid.). The abstraction necessary for that is to be achieved by the certification of climatic zones, i.e., spatial units in which the micro-climatically most important factors are relatively homogeneous and their consequences differ little.

For example, the Synthetic Climatic Functions Map, Ruhr District, Dortmund Section of the KVR defines the following climatic zones for the municipal area: Manor Homes, Outskirts, Urban, Inner-City, Business District, and Industrial/Commercial. They can be ascertained relatively easily for major areas by means of interpretation of heat-images of the surface temperatures, topographical maps and land-use surveys. Climatic functional areas are delimited, and planning indicators developed, on the basis of these climatic zones in other examples as well (e.g. City Manager of the City of Münster 1992, Stuttgart Neighborhood Association 1992).

The present map pursues an approach of abandoning this static philosophy, and also taking into account as far as possible functional connections, the structure of the investigation area and such other criteria as area size, location of the area in the city or the surrounding countryside, and the interactions of areas with one another (cf. also Mosimann,T. et al. 1999). The knowledge (Map 04.04.4, SenStadt 2001b) gained in the preceding investigation projects has served to confirm the statements. As a result, e.g. the same area in an inner-city impact location would thus be judged differently from a location at the outskirts, since the impact factors on the area or the effect which the area exerts on other areas could be very different. In the case of an assessment related only to structural types (e.g. the “Manor Homes Climate” type), by contrast, a uniform assessment would result in both cases.

The functional areas delimited should be able to provide answers to the question as to where:

Between these two poles, spaces were defined:

In addition, areas were to be marked which are to be assumed to be preferred air exchange areas, i.e. which play an important role in near-ground fresh-air transportation.

For these climatic functional areas, sensitivity to use intensification was estimated. This sensitivity was rated as high if a use intensification made reclassification into a less favorable functional area category probable. ”Use intensification” means an increase in the built-up as opposed to the undeveloped proportion of an area. ”This includes the transformation of the natural ground surface into a three-dimensional modeled space consisting predominantly of artificial materials, the resulting reduction of vegetation-covered surface area, and the effect of technical measures that cause waste heat and pollutant emissions” (Kuttler 1993).

The most important equalization effects issue from the relief areas. A low mean temperature as well as high cooling rates in the evening and night hours are made possible by their slight degree of sealing (< 20%) and high proportion of vegetation-covered area, so that these areas function as cold-air generators. The wind and exchange conditions over open areas during the day can be considered very good. However, in tree-stocked parks and especially in forests, they decrease rapidly. In particular, high pollution risks sometimes occur at night, depending on the proportion of open areas, due to the stabilization of the near-ground air layer, causing a significant decrease in the climatic equalization potential of these areas. This is especially true in the vicinity of emitters.

All open spaces which lie within the burdened areas of Categories 4a/4b, or border directly on them, have been defined in climatic relief Category 1a. These areas are spatially direct connected to densely built-up areas, and, due to their function as cold-air generators, provide essential potentials for the relief of these residential areas. The extent to which this potential affects any single area can only be accesertained through detailed investigations. In addition to the area’s size and geometry, the area’s edge structures and/or the surrounding development are the most important factors. von Stülpnagel (1987) cites an area of approx. 10 ha as a standard of orientation for a major external effect, but also demonstrates that even smaller areas can, given suitable local conditions, assume equalization functions.

The areas in Category 1a demonstrate the most extreme sensitivity toward development and sealing. They must be permanently supported in their function, i.e. especially through avoidance of any pollutant emissions within these areas.

Category 1b areas can be found on the outskirts of the city and in the open spaces of the surrounding countryside. They are not of course directly adjacentto the burdened areas. However, due to their great extent, they also perform an important relief function. They have a high sensitivity to use-intensifying measures. It is especially their size and the fact that they extend well into the outskirts of the city which makes them so decisively important.

These areas are to be distinguished from built-up areas, which of course profit from the relief function of the Category 1b areas, but which, due to their development and their degree of sealing, have higher average temperatures and slighter cooling rates than the relief areas themselves. Due to their still favorable climatic structures, the relief areas (Category 2) offer the greatest potential for structural consolidation of all functional spaces. According to current knowledge, a cautious densification of development in these areas would not result in reclassification as a climatically less favorable area. The range within which structural desification might take place cannot be indicated overall; the possibilities would have to be examined in each case on site, and the negative climatic effects be compensated with such measures as roof or facade greening.

The climatic transitional areas (Category 3) include areas of very heterogeneous uses, with differing degrees of sealing and vegetational-coverage proportions. Accordingly, the climatic parameters differ between the values of Category 2 and the burdenend Category 4a.

In the Map of Urban Climatic Zones (Map 4.05, SenStadt 2001c), the transitional area thus corresponds largely to Climatic Zone 3. That means moderate urban climatic change. In the areas directly adjacent and hence in direct interaction with relieved (Category 2) or burdened areas (Categories 4a/4b), there is a high sensitivity to use-intensifying activities, since structural densification can be expected to have a climatically unfavorable effect on this interactive function. However, the exact delimitation of the sensitivity areas will require further-reaching investigation.

Burdened areas are those with a high degree of sealing (> 60%) and built-up proportion (for the most part > 50%), where high mean temperatures, slight cooling in the evening and nighttime hours, and high humidity risks have been recorded. The often poor wind and exchange conditions can lead to a local high pollution burden (cf. Map 04.03, SenStadtUm 1994a).

The burdened area is subdivided into areas of high sensitivity to use-intensifying activities (Category 4a) and areas of very high sensitivity and the urgent need for implementation of suitable rehabilitation measures (Category 4b), depending on the intensity of climatically negative changes. Here, all open spaces, even the smallest, are to be maintained.

The local and/or regional wind systems which produce air exchange between green and built-up areas (corridor-wind effect) and/or the surrounding countryside and the inner city, cannot as a rule be ascertained without costly, targeted measurements in field or model tests. The present map thus on the one hand shows areas which, because of their structure, are preferred areas for near-ground fresh-air transportation, and/or are to be examined for this purpose. Criteria for their appropriateness are particularly slight roughness of the surface, a sufficient width (if possible 10 times the height of the structures around the edge of the area) and a predominantly low pollution burden (Kuttler 1993, Mayer and Matzarakis 1992). Good air-flow channels are thus formed e.g. through broad river courses, railway lines and green areas with low vegetation.
On the other hand, the present map shows small-scale air exchange between equalization and burdened areas for open spaces within or directly adjacent to areas of Categories 4a and 4b. Here, corridor-wind currents are primarily to be expected during low-exchange radiation weather conditions, because of the large temperature gradient to the overheated neighboring developed areas. The range of the relief effects or the existence of possible exchange obstacles can however only be ascertained through more detailed investigations in the immediate vicinity, or through model experiments, since it will require a major technical effort.

Clear meteorological proof of these valuable wind-circulation corridor processes could be obtained e.g. in the area of the Weissensee farmland between Heinersdorf, Malchow, Karow and Blankenburg (German Meteorological Service DWD 1994). In the investigation area, it was shown that at wind speeds of less than 1.5 m/s, an inflow of air from the surrounding countryside in the direction of the city center occurred, regardless of the state of overall air circulation. Under the current regional land-use plan, large parts of this area are part of the projected future open-space loss areas, due to rezoning as mixed or residential areas (Berlin Land-Use Plan, SenStadt 2001e). Model investigations on wind-corridor effects have been presented, e.g. in the context of the project “Effects of Regional Climate Change in Metropolitan Areas, Using the Example of Berlin”, by the Federal Ministry for Research and Technology (Wagner 1993). Here, temperature and currents were simulated for a 7×7 km² inner-city area on the basis of various land-use parameters. Figure 1 shows a summer simulation, which was run using the marginal values typical for this season: In the green spaces of the Tiergarten and the Rehberge Volkspark, the temperatures are clearly lower than in the heated, largely sealed areas. In the green-space areas, an acceleration of the air current is shown, while currents decelerate in the heavily built-up areas because of friction. The associate increase in air exchange is significant for the clean-air situation in Berlin. 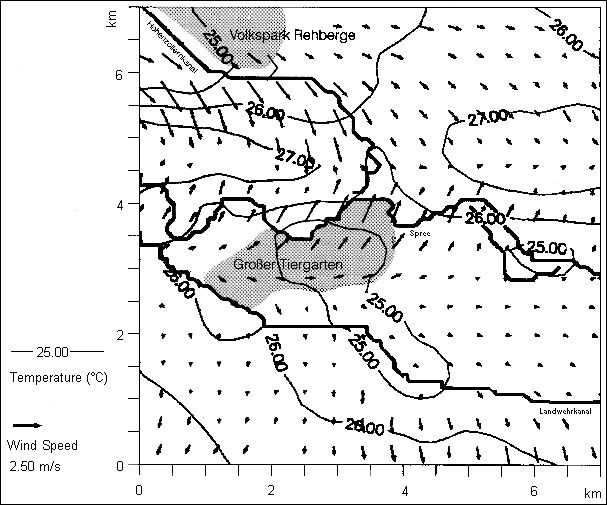 Fig. 1: Simulation of the Temperature and Wind Fields at 10 m Height in the Inner-City Area of Berlin during a Summer Radiation-Weather Period around 2.00 p.m. CET, Considering Land Use. Model Assumes a West Wind of 3 m/s
Image: from: Wagner 1993, changed slightly

On the basis of these functional areas, the climatically necessary measures can be derived which are necessary for the minimization of local burdens, to preserve the available climatically favorable open spaces, and to optimize the air exchange between burdened spaces and those which contribute to equalization.