The Environmental Atlas has for more than 25 years gathered information and data on urban climatology (see SenStadtUm 1985). With the results of the application of the FITNAH Climate Model, comprehensive information about today’s climatic situation in the municipal area and the nearby surrounding areas is available (see Map 04.10 in Climate Model Berlin, Analysis Maps, 2009 edition, and Map 04.11 in Climate Model Berlin: Evaluation Maps, 2009 edition). Knowledge of the local urban climate, particularly the location and extent of urban heat islands and the climatic functional relationships between residential and green spaces, are important aspects of environmental precautionary policy and urban development.

For some years, the range of challenges has been increasing dramatically: the assessment of the effects of the changes to be expected from global climate change on thermal, hygric and air-purity conditions, particularly in metropolitan areas, requires additional answers to support the demands summarized under the concepts of “mitigation” and “adaptation”.

Climate protection has been an integral part of Berlin environmental policy for years (see Ziele und Grundlagen der Klimaschutzpolitik in Berlin (Goals and foundations of the climate protection policy in Berlin – German only)). The city has a long tradition of implementing numerous programmes on:

Nonetheless, adaptation to climate change has been a topic of only marginal interest to date. However, the normal conduct of municipal administration is no longer conceivable without addressing the need to adapt to climate change. With the acceptance of the Fourth Assessment Report of the Intergovernmental Panel on Climate Change (IPCC) of 2007, both the fact of climate change and the high probability that it is anthropogenically caused have been internationally recognized.

Observation data shows that the climate has been warming since the last century. The global mean near-surface air temperature rose by approx. 0.74°C during the period from 1906 to 2005. On average, mountain glaciers and snow cover have decreased worldwide. Such extreme events as heavy precipitation and heat waves – such as during the “summer of the century” in 2003 – have become more frequent, and since the 1970s, more intensive and longer lasting droughts have occurred in larger areas in the tropics and subtropics. The expected risks are increasing with rising temperatures (see Federal Environment Agency).

The global mean near-surface air temperature has been rising since the beginning of industrialization. The higher concentration of greenhouse gases caused by the anthropogenic burning of fossil fuels in the atmosphere has led to an overall warming of the lower layers of the atmosphere (see Fig. 1). 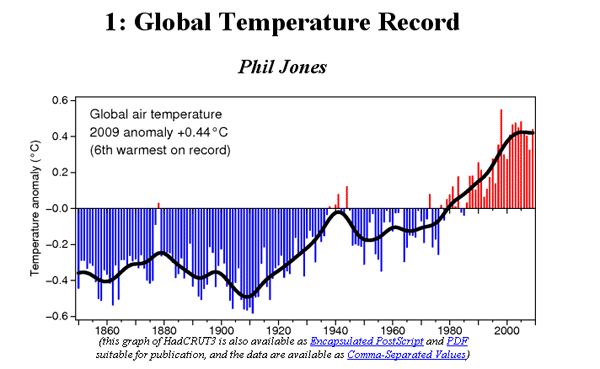 Fig. 1: Deviation from the global mean of near-surface air temperature from the average value, 1961 through 1990
Image: Climatic Research Unit – University of East Anglia

According to the forecasts of the IPCC, the following changes are to be expected in Germany by 2050:

In order to be able to better assess the regional impacts of these future climate changes in Germany, so-called regional climate models have been used to compile data to project possible future developments, for example, under contract for the Federal Environment Agency.

The climate models are based on assumptions about the development of emissions during the coming decades, which in turn depend on possible – worldwide – demographic, societal, economic and technological developments. The IPCC’s Special Report on Emissions Scenarios (SRES) are the authoritative basis for most climate projections. For most projection calculations, Scenario A1B is used, which is based on the following assumptions:

All SRES scenarios assume no additional climate initiatives, i.e. none of the scenarios include consideration of the effects of the implementation of international climate agreements.

The resolution level of the regional model is 10 km x 10 km per grid square. Although this is a considerable quality leap compared with global models, which use grid sizes of 200 km x 200 km, it is still far from being sufficiently precise for urban planning purposes.

Two of the best known models in Germany are the dynamic regional model REMO and the statistical method WettReg.

At the federal level, the German Strategy for Adaptation to Climatic Change (DAS) was adopted by the cabinet on December 17, 2008. This is the federation’s contribution to create a framework for adaptation to the impacts of climate change in Germany, which needs to be further developed by the cities and metropolitan areas, according to local impacts (see here for more information).

The point of departure for better assessing this local impact for Berlin is the cooperation agreement concluded in early 2008 between the Deutscher Wetterdienst (DWD), Climate and Environmental Consultancy Department, and the Berlin State Senate Department for Urban Development, Geo-Information Section, Office of City and Environment Information System, which was successfully completed at the beginning of 2010. The project report submitted for this purpose has also provided essential contributions to the text presented here (DWD 2010).

The approach of the maps and data presented here was thus to address the question as to how thermal conditions might develop in Berlin, on the basis of information and model data existing today. This is also of special interest because it must be assumed that areas of the city that are not yet affected by thermal load will very likely be subjected to much higher summertime temperatures during the coming decades, due to continued climate warming. This applies both to expected absolute temperature peaks and to the duration of heat waves.

The goal was thus essentially to take stock of the expected climate impacts, particularly in built-up areas, where the vulnerability of city dwellers – and especially older inhabitants – is the greatest.

The methodology for studying the possible impacts of global climate change at a local level is still a new area of research: it is not at all standardized, and therefore the interpretation of results always involves certain uncertainty factors (see Methodology).