As a first step, this assignment enabled the various measurements of a measurement trip to be synchronized, i.e., referenced to a point in time (von Stülpnagel 1987). The results of the measurement trips for each measurement point were then used to calculate a mean value. The long-term wind statistics for 1950 through 1970 from Berlin-Dahlem (Riemer 1971) were applied for the weighting of individual surveys: The relevant air temperature value was weighted for the determination of the mean value by means of the wind direction at the referenced point in time of each survey, and its share of the long-term mean of all wind directions. 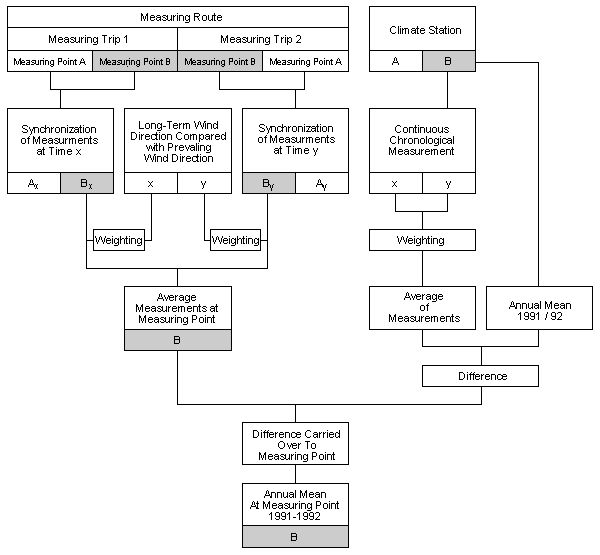 The long-term mean at both stations for 1961 through 1980 was around 0.2 °C lower than the newly calculated values for 1961 through 1990 (Institute for Meteorology, FU Berlin 1981-‘90 and DWD 1981-‘90). The adjustment of the West Berlin long-term mean to the new period proceeded on the assumption that this difference of 0.2 °C would apply for all western measurement points of the measurement network, and thus a general increase by this quantity of difference would be justified. Forest locations were the only areas where no changes were undertaken, on the basis of results provided by two stations operated in the Grunewald since 1986.

The calculation of long-term temperature values in East Berlin and the nearby surrounding countryside, was accomplished on the basis of the mean values calculated for 1991-‘92, differentiated according to three different use types. Climate stations were selected which presented a suitable database for the inquiry of the projection factors, because they had been in operation for several years. The Tiergarten park station was representative for parkland/ forest locations. The Alexanderplatz station was assumed to be representative for dense development. A 5-year test series between 1975 and 1980 was available for both stations. Under the assumption that these stations would fit between the Dahlem and Tempelhof long-term monitoring stations in the same manner for the period 1975-‘80 as for the long-term mean, it was possible to determine long-term mean annual values for Tiergarten and Alexanderplatz. The difference between these means and the mean annual temperatures for 1991-‘92 was then used in the projection for the associated measurement points. Figure 4 shows the principles of this procedure, using as examples the Alexanderplatz station and the measurement points for dense development. 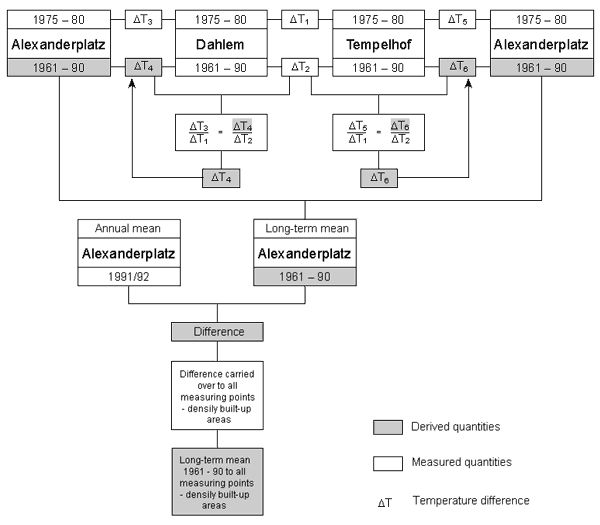 Fig. 4: Schematic Diagram for Calculation of Long-Term Mean, Using the Example of the Alexanderplatz Station as Reference for a Location in a Densely Built-Up Area
Image: Umweltatlas Berlin

This process provided a long-term mean to use in projections for parkland and forest locations. It is approximately 1.3 °C below the mean annual temperature for 1991-‘92. The difference for densely developed locations was about -0.8 °C. The long-term measurement station Dahlem represented the third use type of sparse development. Its directly measured 30-year average was approximately 1.0 °C below the mean annual temperatures for 1991-‘92. Use-referenced values were increasingly included in the projection of 30-year mean temperature values for East Berlin and the surrounding countryside. The interpolation of individual values to areas was performed manually.

The update of the map to the land use situation of 2000 was carried out in several stages. First, the results from the station and trip measurements were time-corrected. After these raw data were processed, a scaling of the temperature values was carried out. The goal was the establishment of a uniform comparative standard to permit the current data of the stations and measurement trips to be entered into the existing 1993 database. The temperature of the investigation period could be compared with the corresponding long-term values by means of the Dahlem reference station.

For areas with use structures which had changed since 1993 and could not be included in the measurement process, an update was carried on the basis of similarity analyses.