Today’s surface formations in Berlin were largely shaped by the Weichselian Glaciation, which has also marked the city morphologically (Figure 4). 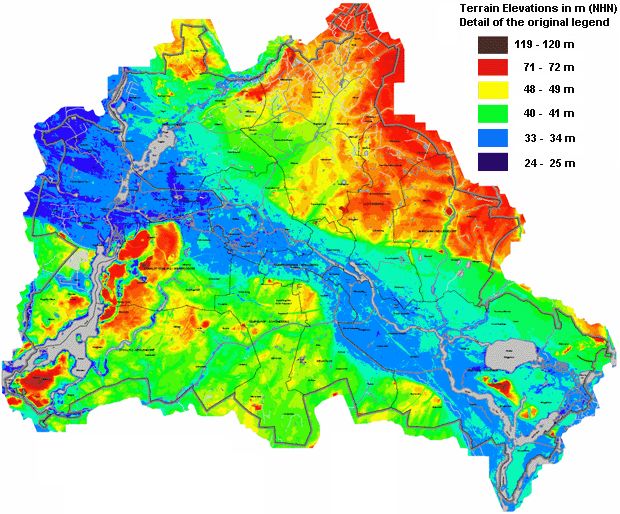 In terms of natural areas, the city appears to be divided into three parts, the Barnim Plateau in the north, the Teltow Plateau, together with the Nauen Plate in the South, and the morphologically lower lying Warsaw-Berlin Glacial Spillway (Figure 5). The geomorphological image is supplemented by the low-lying areas of the Panke Valley and the Havel Chain of Lakes. 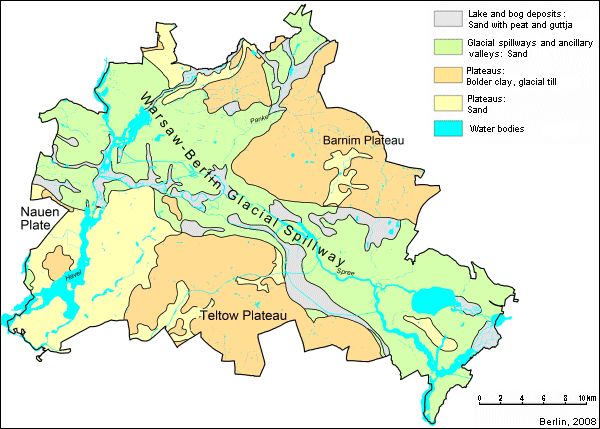 In the Northeast, the Plateau is crossed by the valley of the Panke, with its valley sand deposits, which runs roughly north-northeast to south-southwest. In the village of Lübars in the borough of Reinickendorf, there is a small area in which the tertiary rupelton clay is close to the surface, due to salt-tectonic processes; otherwise, this clay occurs only at greater depths of approx. 150 to 200 m below the surface. Starting in the mid-19th century, this clay was quarried in an opencast process, and baked into bricks in a circular kiln built on-site. Such famous buildings as Berlin’s Red City Hall and the Reinickendorf Borough Hall were built in part with these bricks. After the quarry was closed, groundwater flowed into the pit, creating a lake which is today used as a swimming facility.

The Warsaw Berlin Glacial Spillway is characterized particularly by the accretion of glaciofluvial or fluvial sand and outwash gravel of great thickness – up to 50 m; it passes through the city from east to west, crossing the inner-city area. At some places, saltation load horizons and glacial till residues were deposited (ASSMANN 1957). Locally, these valley sands are covered by younger Holocene sediments (sands, peats and gyttjas mixed with organic material, as well as dunes) of various thicknesses, some very great.

The units on the map can be described as follows, starting with the older, lower layers and working up to the younger, upper ones:

Only in a small area in the village of Lübars east of Hermsdorf Lake can tertiary sediments be found in the form of rupelton clay from the Oligocene.

Petrographically, this is a light grey to olive green, calcium-containing silty clay/clayey silt with a small share of fine sand. The sporadic occurrence of lenses of limestone (“concretions”, Ger.: Septarien) created by accretive crystallization have given it the name “septarian clay”.

Due to its clay content, the rupelton forms a binding sentiment with very low water conductive capacity (an aquaclude). In Berlin, with its great thickness of approx. 80 m, it forms the barrier between the lower saltwater and the upper freshwater layers, as it does in large parts of northern Germany.

Sediments of the Quaternary

This category of glaciofluvial sediments includes all meltwater sands deposited above, within or below the Weichselian-era ground moraine. They were transported by the water melting off the glacier, and deposited in various forms and grain sizes.

The meltwater sands widely distributed across the ground moraine may contain a share of late Pleistocene to Holocene outwash mass. They may consist of a quite variegated spectrum of grain sizes, ranging from silty fine sand course sand, and can also be of variable thickness.

Moreover, within the glacial till, interglacial sands occur, usually only locally, and generally only of minimal thickness. These sands cannot be distinguished petrographically from the glaciofluvial meltwater sands, so that the delimitation between the Weichselian and the Saalian-era tills is often difficult.

Due to their cohesionless nature, meltwater sands have a great water conductive capacity and are therefore good groundwater conductors.

Boulder clay, glacial till of the Weichselian Glaciation

The moraines of the Brandenburg Phase of the this Weichselian Glaciation, in some places covered by meltwater sands, forms a coherent horizon of glacial till of between five and 10 m in thickness, sometimes more. Petrographically, it consists mostly of weakly clayey, silty, calcium-containing sands with a low share of gravel and stones, and only rarely dropstones. On the surface, the till has been de-calcified by the effects of the weather and has turned into boulder clay.

Due to their share of clay and silt, the till and boulder clay constitute a binding sediment with a low level of water conductive capacity (an aquitard).

In the areas covered with sand and in the edge of the plateaus, the thickness of the ground moraine has generally been reduced by erosion.

The dropstones carried by the glacier or eroded out of the ground moraine can be seen all over the city.

As the Weichselian ice continued to melt, the Warsaw-Berlin Glacial Spillway was created. Its development occurred in a number of phases. Both the meltwater of the older period of the the Weichselian Glaciation (Frankfurt Phase) and of the younger period (the Pomeranian glacial edge) use the valley courses as drainage channels leading north-westward toward the Elbe and the North Sea.

In the Glacial Spillway, the valley sand is generally more than 10 m thick; below it are the sediments from the Saalian Glaciation. In the upper layers, the valley sand is fine to medium grained, in some cases silty; at greater depths, it becomes coarser, and more often includes gravelly admixtures. Both the Weichselian and the Saalian ground moraines have been largely eroded, so that the sand from the Weichselian Glaciation in most cases rests directly on older sand layers, sometimes as much as 50 m deep.

In the Panke Valley, an ancillary valley of the Glacial Spillway, this same sequence of sand can be seen, although its thickness is seldom greater than 10 m. Locally, glacial till deposits can be seen which are interpreted as erosion residues both of the Weichselian and the Saalian ground moraines.

Due to their cohesionless nature, the valley sand has a great water conductive capacity and is therefore a good groundwater conductor.

Sediments of the Holocene

During the late phase of the Weichselian Glaciation, which was still cold, dry and poor in vegetation, there was a build-up of dunes and fly-sand fields. Major fly-sand areas and extensive dune fields are no rarity in Berlin, and often occur at the edges of the major lowlands in the Glacial Spillway. In Tegel, Spandau and Friedrichshagen, large and very high dunes (up to 30 m), such as the Ehrenpfortenberg, were raised up by the winds. In Spandau, parabolic dunes were created. The ground moraine areas remained largely free of dunes, since the binding material deposited there was little or not at all suited for fly-sand formation. The dune sands consist of a grain size spectrum ranging from fine to medium sand.

With the melt of the last dead ice of the Weichselian Glaciation, hollow spaces were created in which various types of gyttja and/or humus sand formations arose from the sedimentation which already began during the late Weichselian phase, and continued into the Holocene. In some places, these deposits can be up to 40 m thick, as on Museum Island or at Tiefwerder. The Laach Lake tufa, a deposit of no great thickness resulting from a volcanic eruption in the Eiffel Mountains in 9350 BC, has been attested in such gyttjas at some places in Berlin (PACHUR & RÖPER 1984 and LIMBERG 1991). In connection with the continuing land forming of lakes and other bodies of water, large-scale peat bogs and peat-earth areas (mixture of organic and mineral substance) arose in the lowlands and also on the plateaus.

The Holocene formations are distributed with small or large coherent areas across the entire city, however primarily in the lowlands of the Glacial Spillway and in the valleys on the plateaus. The fluvial floodplain sediments of the Spree can often not be distinguished from the glacial spillway sediments, due to anthropogenic changes in the landscape (construction, the channelling of watercourses).

Anthropogenic changes in the landscape

The landscape of the Berlin metropolitan area has been permanently overformed by human activity. Since the Neolithic, some 5000 years ago, people have been continually impacting upon the landscape. In the Middle Ages, large-scale forest clearance led once again to drifting of sands and to some formation of dunes in the Glacial Spillway (LIMBERG 1991). The damming of water to drive mills and the drainage of swampland during the Middle Ages caused changes in the groundwater situation which affected the development of bogs. Natural and artificial changes in watercourses led to the emergence of dead river arms. Moats were dug around the city, and later filled in again. In the Glacial Spillway, which at that time still consisted largely of swampland, embankments (Ger.: Damm) such as the Kurfürstendamm or the Kaiserdamm were built and reinforced to carry roadways and railways. Later, landfill was dumped in low-lying areas. Numerous old gravel quarries in the Glacial Spillway are today artificial lakes or groundwater ponds (Great Spekte Lake, Habermann Lake). Construction rubble, especially that resulting from wartime bombing, was piled up as dumps or hills, such as the Teufelsberg or the hill in the Prenzlauer Berg Public Park. Ultimately, urbanization so overformed large areas of the landscape within the city that in many cases, the original morphological or geological formations can be recognized only with great difficulty.

Major construction projects in the Glacial Spillway which required long-term lowering of the groundwater level have in some areas with very thick Holocene-era organogenic layers (bad construction land) led to settling and major damage to buildings. For example, in the “wet triangle” in the boroughs of Charlottenburg and Mitte (around the old Friedrichstadtpalast), entire houses have had to be torn down, since the long-term lowering of the groundwater caused by underground metro construction has on the one hand led to settling of the terrain, and on the other go damage to the timber piles upon which the buildings were built.