The depths to groundwater are calculated from the difference between the terrain elevation and the level of the groundwater surface, or, in the case of confined conditions, the covering surface.

The calculations of groundwater levels are based on data taken from approximately 1,400 groundwater measurement sites of the State Water Service in May 2002, in areas with free groundwater surfaces.

Areas with a confined groundwater surfaces in Berlin were investigated using the digital information on hydrogeological sections of the Geological Atlas (SenStadt 2002) of Berlin, as well as selected (ultimate depth > 10 meters) bores from the drilling archives (cf. Fig. 5). In these areas, not the water-levels of the measurement sites but rather the lower surfaces of the Groundwater obstructions were ascertained.

The terrain elevations were taken from the altitude model of the Environmental Information System (slightly modified by the inclusion of altitude readings from the geological sections of the Geological Atlas). The data bases and methodologies for this model are described in the text accompanying Map 01.08.

Moreover, numerous supporting points for water levels along the surface waters were included in the determination of the regional distribution of the groundwater surface. These points were used only in areas undisturbed by water-utility activity. In Berlin, such locations are found exclusively in the outlying areas (e.g. Dahme, upper Havel). The reason for the inclusion of these points is the goal of avoiding of calculated ground-water levels above the table along the waters. Thus, even such small streams as the Grosse Kuhlake in the Spandau Forest or the Tegel or Neuenhagen mill streams (Erpe) could be into account. 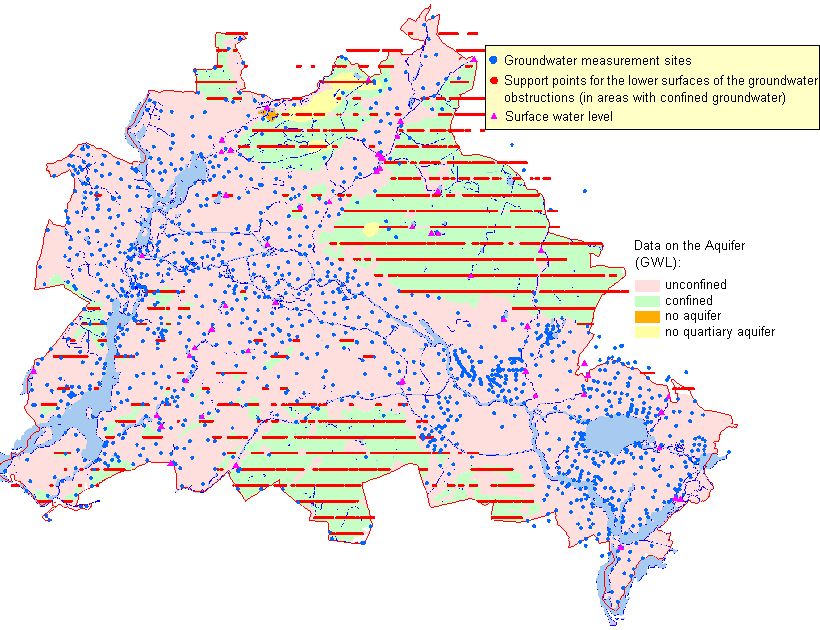