The data for the calculation of the runoff quanta for the approx. 25,000 single sections of the ISU spatial reference system were provided by the Berlin Urban and Environmental Information System (ISU). A detailed description of the data bases can be found in the extensive documentation (Gerstenberg and Goedecke, 2013).

The data on land use are based on the evaluation of aerial photography, borough land-use maps and additional documents for the Environmental Atlas (cf. Map 06.01 and Map 06.02, 2016 edition and Map 06.08, 2016 edition). Some 22 types of use and 52 area types have been distinguished. The area use data plays an important role in the water balance model. If site-specific data is not available for necessary input parameters, lump sum mean values per use type or area type are given at block or block segment level. In addition to the degree of connection to the sewage system (see below), above all, the evaporation parameters or a block or block segment are assigned globally via the vegetation properties or the structure of the vegetation to be expected on the area. The details of the area use and/or area type are used to determine this. This assignment, integrated in the program, was carried out as part of the program development at the end of the 1990s and has been adopted since then.

The long-term mean values of precipitation for the series of years 1961 through 1990, showing the annual mean temperatures and the means for the summer semesters (May through October), were calculated from the measurements from 97 measuring stations of the Free University of Berlin and the German Meteorological Service (cf. Map 04.08, 1994 edition). The data from this model were calculated for the center-point coordinates of the block segments.

For the potential evaporation, long-term mean values of the TURC evaporation, increased by 10 %, were used. These were calculated from observations by climate stations in the Berlin area. For the municipal area, borough-referenced values between 610 and 630 mm/a and between 495 and 505 mm for the summer semester were assigned.

For the determination of the depths to water table, a digital terrain model with a 5 m grid width was used (cf. Map 01.08). Parallel to that, a model of the height of the groundwater surface was compiled from measurements at observation pipes of the State Groundwater Service and by the Berlin Water Utility obtained of May 2009. The depth-to-the-water-table data used for the calculation of the runoff were then calculated for the center-point coordinates of the block segments from the difference model between the altitude model and the groundwater height model (cf. Map 02.07, 2010 edition) for the block segments.

The section size is used for the calculation of runoff volumes. The size of each block segment (without roadway areas) is available from the ISU. In addition, the estimated surface area of the roadway surface, referenced to each single block segment, was indicated. For this purpose, the road areas of the ISU5 were distributed between the block segments proportional to the road frontage length of the block segments.

However, the map did not yet state the extent to which the water derived from the built-up or impervious areas is actually passed on. For this purpose, for the 2005 edition, special investigations were undertaken. Two data sources existed for an estimate of the actual degree of connection to the wastewater/sewage system. On the one hand, the lump sum values for the individual area types determined as part of a dissertation by Bach in 1997, which had been used in the 1999 edition. The second source of data was collected in the context of the restructuring of the sewage-fee schedule by the Berlin Waterworks (BWB). A property-specific survey of impervious areas was carried out, which distinguished between connected and non-connected impervious areas. Its purpose was to determine the costs of rainwater disposal, largely according to the principle of causality. These data were also recorded graphically and submitted to the Senate Department, aggregated to the data surfaces of the spatial reference system of the ISU. The evaluation of these data showed, however, that the BWB’s graphic recording had not been carried out everywhere. For this reason, the original data could not be used directly for the water balance model of the Environmental Atlas. Based on the consideration that the degree of connection is closely related to the age and structure of the buildings, mean values were therefore determining arithmetically for the individual area types from the BWB data and the map extensive mapping of the urban structure types (cf. Map 06.07 and Map 06.08 as of 2015, 2016 edition), which covers all areas, and these were then assigned as lump sum values to all the individual areas of the corresponding area types connected to the wastewater/sewage system. The results are summarized in Tab. 1. A comparison of the values with those ascertained by Bach in 1997 yielded good agreement. Only in the case of green and open areas with little or no built-up component, the degrees of connection of the non-built-up impervious surfaces differ strongly from the values determined by Bach. As the analysis of the BWB data had shown that, especially in these areas, the undeveloped impervious areas had not been surveyed, or only inadequately, the Bach value was retained for this structure type. The actual degrees of connection to the sewage system of the road areas were also assigned from the Bach data, as the BWB had not surveyed the road areas. Tab. 1 shows the lump sum degrees of connection per area type, which were also input into the calculation of the water balance model, 2019 edition. 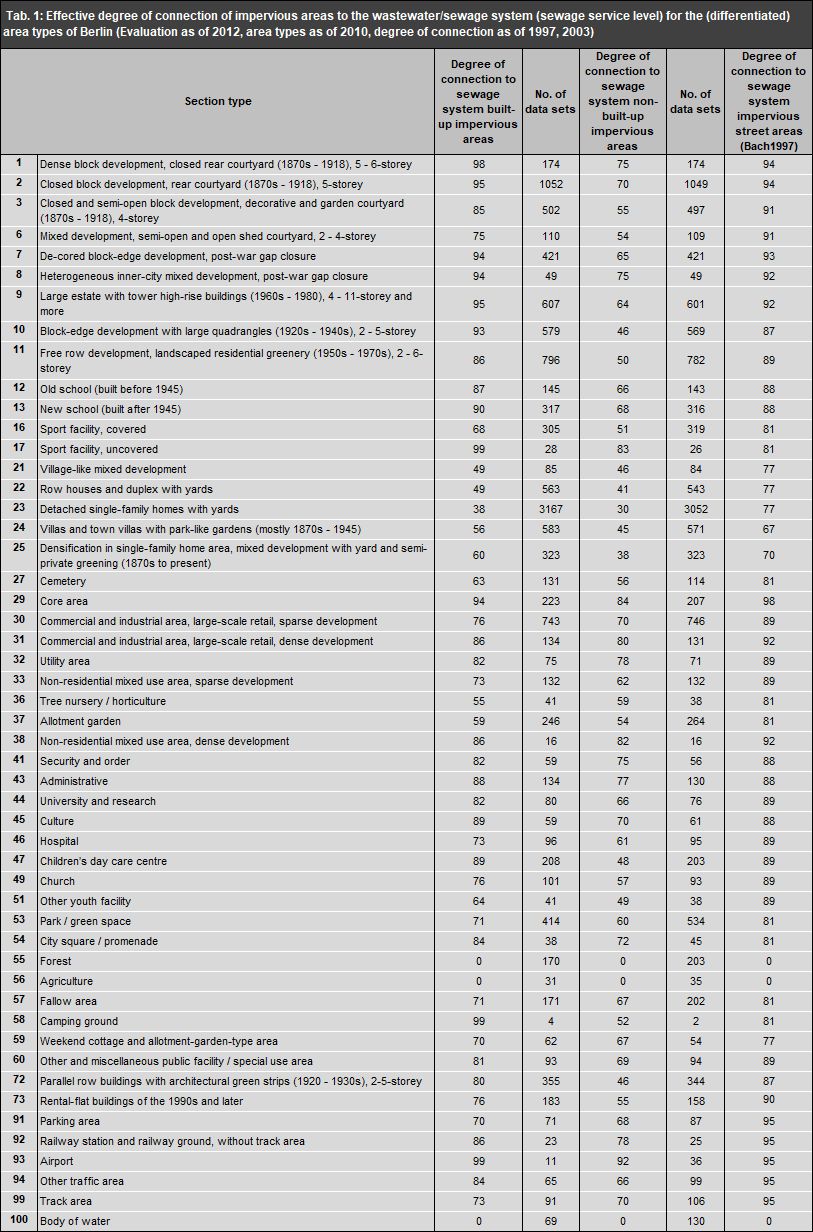 To include the roof planting, the approx. 400 ha of extensively and intensively planted roof areas from the existing Environmental Atlas Map 06.11 Green Roofs (edition 2017) were used.